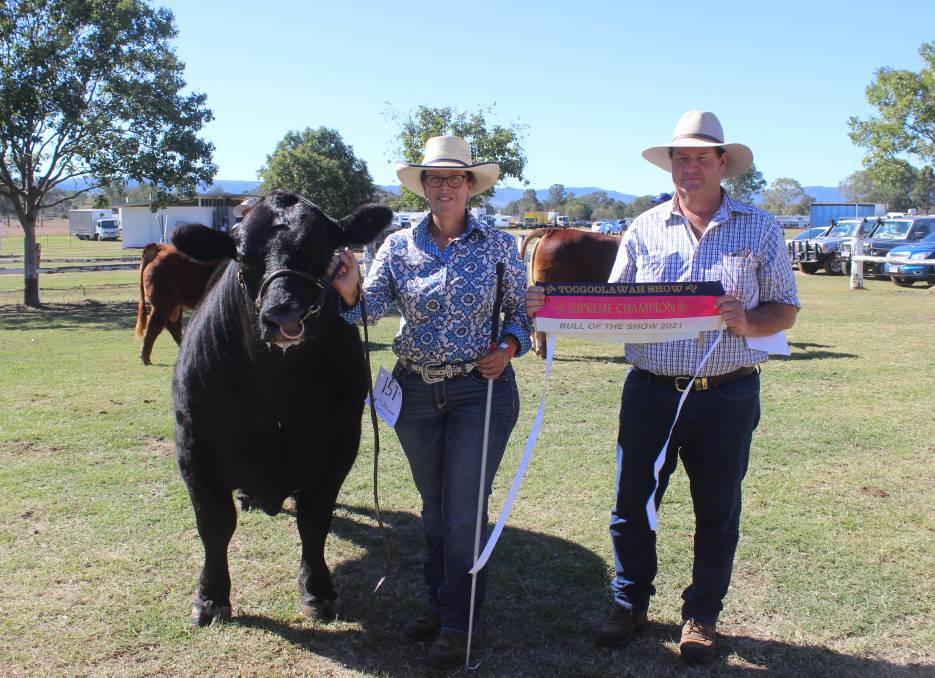 Supreme bull exhibit was the Angus bull K5X Quantroy and held by Leanne Ridley and sashed by Peter Heath.

Overall 175 stud cattle entries paraded before the judges at the Toogoolawah show last Saturday which culminated with the supreme female award going to a Droughtmaster cow, Nindethana Innika, who was exhibited by Brownyn Betts, Nindethana Droughtmasters, Camp Mountain.

Nindethana Innika was praised for her femininity and body capacity. At 56 months of age, Nindethana Innika, was exhibited with a heifer calf at foot, and is back in calf and nearing the end of her show career.

K5X Quantroy was praised by the judges as a great representative of the Angus breed, and he was an unanimous decision by all three judges.

Although K5X Quantroy had been placed in his class at last month's Beef 2021 competition, this is the first time he has collected a broad ribbon.

A total of 71 led steers competed for $5000 in trophies and prizemoney from many sponsors including Black Truck Sales, Toowoomba, Komatsu Australia and Ridley and were judged by James McUtchen, Janbiu, Jandowae.

It was a black Limousin steer named Black Jack aged 18 months and weighing 662 kilograms, who emerged from the 551kg and over class who was sashed the champion led steer.

Black Jack was exhibited by the Bushranger's Syndicate and shown by Matthew O'Dwyer, Kalbar, and described by Mr McUtchen as a stand-out steer, with even fat cover and was a very worthy winner. . .

The champion young parader was Brooke Parlane from Pine Mountain. Brooke earlier claimed the over 18 section and was praised by judge Brenden Lyndford as a very efficient handler.

"She is parading an exhibit that really wants to be with her and she is kind to her animal while being in control," Brenden said.