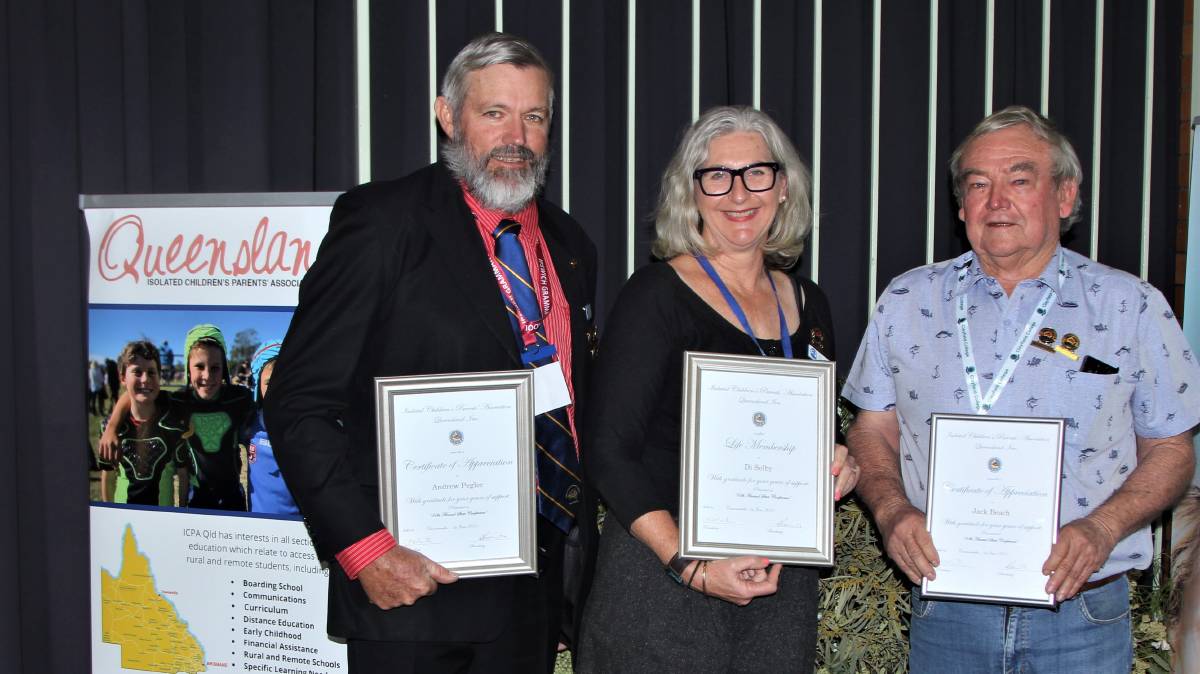 The service given by three long-serving members marked the beginning of the milestone 50th Isolated Children's Parents' Association in Cunnamulla this week.

The service given by three long-serving members marked the beginning of the milestone 50th Isolated Children's Parents' Association in Cunnamulla this week.

To standing ovations, the 250 conference attendees heard of the dedication the trio put towards the needs of geographically isolated children over many years.

Ms Selby quietly joined state council in 2006, saying she didn't have a lot to offer, but went on to serve in the demanding role of state secretary from that time until 2011.

"This allowed her to utilise her impeccable organisational skills to effortlessly organise delegations, conference speakers, book venues, organise councillors and keep track of everyone and everything," a more recent secretary, Kel Ostwald said.

While stepping down as secretary in 2011, she stepped up as a vice president of the organisation for a year, convening the state conference in Goondiwindi at the same time.

Although stepping down from state council after that, she didn't step away, taking on the enormous role of compiling the annual conference minutes, which she does to this day.

At the same time she converted all paper-based minutes to digital versions, and transferred archived ICPA state council documents onto a digital platform.

Another who worked to make ICPA a lobby group with no peer was Jack Beach, who attended his first conference in 1990 as a Julia Creek delegate.

Raising four children on the family sheep and cattle property near Julia Creek gave him plenty of personal experience of geographical isolation and education.

At the same time as becoming state vice president in 1996, Mr Beach took on a councillor role at federal level.

He then added the job of state president in 2000, stepping down in 2003 to take the reins as Australian president until 2007.

His time in office was characterised by a passion for communications, being heavily involved in the roll-out of telephone lessons for all Schools of Distance Education, as well as the bypassing trial.

At the time of his presidency, distance education families were negotiating a path from telephone lessons to virtual schooling, where his grasp of IT issues ensured no isolated child missed out on their hard-won daily teacher contact.

He had an early vision for an ICPA website and to get all of state council 'connected'.

A more recent past president, Tammie Irons noted his casual style of presidency and the "Life's a Beach" catch-cry that evolved from a trip he took with then-Education Minister Anna Bligh.

"Jack, we remain in awe of the footprints you have made in the sands of your very own ICPA beach, and we know that those of us who have been fortunate enough to stand in those footprints have had an easier path to travel as a result of your passion," Ms Irons said.

Another past president with a strong association with communications issues, Andrew Pegler also received a certificate of appreciation at the conference.

His association with ICPA stretches back to the 1990s, attending his first conference in Mount Isa in 1993 in a support role as chief baby-sitter while his partner Mary Killeen undertook her work for state council, which was their modus operandi for many similar conferences.

It was at the federal conference in Charleville in 2002 that he joined federal council, where he remained for seven years, the last four as vice president.

Upon stepping down in 2009, he was asked to join the state council, so he was 'off-council' for about six weeks.

Mr Pegler took over as state president in 2011 at Rockhampton, retiring in 2015, but remaining as Universal Service Obligations advisor for two years.

"Andy gave his all to ICPA," current president Louise Martin said. "When business responsibilities and running a cattle property in drought could have easily consumed his focus, he never let these pressures overshadow the commitment he gave to his teams and the effort he put into our member's issues."

As issues of access to reasonable internet connections for rural and remote members continued to accelerate, he kept abreast of the extremely complex issues

Ms Martin said his endeavours to get the message through to government that rural and remote Queensland should not be left with a sub-standard service that mainstream counterparts would never accept were unfailing.

"The relationships Andrew fostered with the Queensland Education IT department and federal communications departments enabled ICPA to have a real voice and a seat on the table at these discussions," she said.

Ms Martin also paid tribute to the favourable relationships he built up with the state Education Department, particularly with deputy Director-General Petrea Walton.

"Our current state councillors continue to benefit from this positive collaboration and will do all we can to continue this way," she said. "Working with the department in a positive way and offering solutions to the problems has ultimately lead to many favourable outcome for members and we continue to thank Andrew for paving the way for us."

She said Mr Pegler joined a long line of presidents and state councillors who had all contributed to instilling a solid ethic that defines Queensland, based on integrity, respect for the past and excitement for the future.

Mr Pegler said he was so proud of what had been achieved as a team.