People travelled from as far away as Gladstone to take part in the sessions at Glenmore, south of Surat.

Goats are no longer a 'set and forget' part of western Queensland producers' enterprises, judging by the attendance at a Going into Goats field day held at Glenmore Station south of Surat last Sunday.

Goats are no longer a 'set and forget' part of western Queensland producers' enterprises, judging by the attendance at a Going into Goats field day held at Glenmore Station south of Surat last Sunday.

Around 100 people from as far afield as the Lockyer Valley and Charleville turned out for the day organised by ConnectAg at Roma, which organisers said was a good indication of the value being placing on goat management.

According to Dubbo consultant Peter Schuster, who is working with Meat & Livestock Australia's Profitable Grazing Systems program, at $10/kilogram, it wasn't surprising people were paying more attention to supporting the productivity of their goats.

One of his messages was to watch stocking rates behind exclusion fences carefully.

"Goats are more fecund than sheep or cattle, they'll have more progeny," he said. "Producers can run into trouble quickly because if the animals are contained - in an open rangeland environment they self-regulate, the population moves - once you put them behind a fence you've got to watch that number, manage that number." 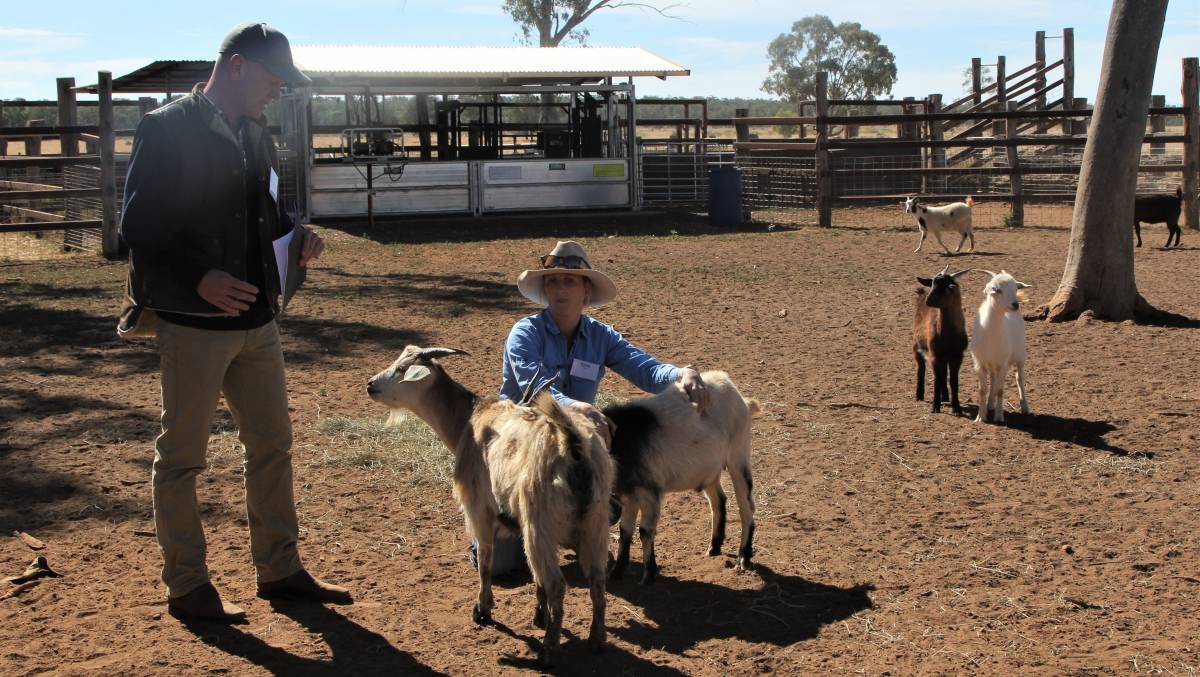 Consultant Peter Schuster and owner Katie Honor point out some of the features of rangeland goats for field day participants.

Exclusion fences were helping the industry mature from an opportunistic one to a managed situation, which meant that practices that are common in cattle and sheep industries could be introduced to the goat industry.

That included things such as controlled joining, drafting according to specification and body condition scores, to improve fertility and kid survivability.

The field day also heard from University of Queensland researcher Simon Quigley on supplementary feeding rations, from Col Paton of EcoRich Grazing on how to do a forage feed budget incorporating browse, and from producers Sarah Packer and Nicholas Perkins on their experiences.