Competition was on in the heavyweight and lightweight classes, with a combined 70 entries bidding to take home the gold and $2000 cash prize.

Ekka was in the air at the 2021 Boonah Show led steer competition - showcasing the best of the region's cattle.

Competition was on in the heavyweight and lightweight classes, with a combined 70 entries bidding to take home the bragging rights and $2000 cash prize.

Judge Thomas Fagg, who is a commercial breeder and buyer, said the cattle exhibited were some of the best he'd ever seen and that he'd expect all that enter near the podium during Ekka in August.

"These cattle are a credit to the region, I've never judged a led show in Boonah and I have to say I am impressed," Mr Fagg said.

"The steers here today will definitely do well at the Ekka, this is as good a group of led steers as I've ever seen.

"It was an outstanding line-up with a lot of suitability to the trade job ahead of them."

The champion heavyweight went to Limousin entry B1, owned by Matthew and Peta O'Dwyer, Kalbar.

Only a few weeks prior, B1 took home heavyweight class honours in the coveted led steer competition at Beef 2021.

The couple purchased the winning steer as a weaner from Neil Goetsch, Goetsch and Sons, for $1900 mid last year. Peta O'Dwyer with heavyweight champion B1.

"When we purchased him, we did target him for these sorts of shows and we're more than happy with how he's got on," Matthew said.

"He has been on grain and ration to hold him through until now.

"The competition was really strong and we just turn up on the day hoping for the best."

Matthew said the champion steer is coming to the end of his competition days and will miss out on the prestigious Ekka led steer competition.

"His teeth are getting a bit dodgy, we'll get him to the Toogoolawah Show but the Ekka is just out of reach," he said.

"These local shows are getting harder and harder for the steer game. Everyone's getting involved. It used to be a bit easier, but now it can go either way on the day of a show." 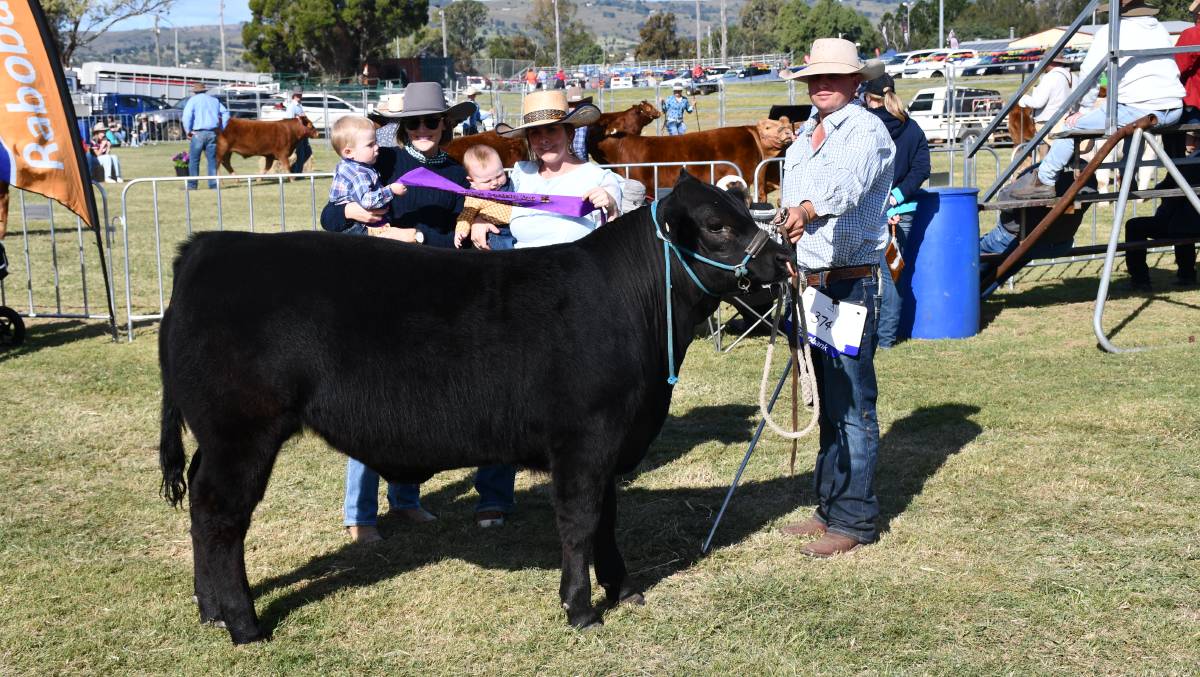 Champion lightweight went to a pair of lightweights themselves, toddler team Hudson O'Dwyer and Fletcher McMahan and their Limousin steer Johnno.

Hudson's dad, and Matthew's brother, Anthony O'Dwyer, Wisping Pines, Dalby, said he oversaw the early start to his son's exhibitor career and that the young team will be presenting at the Ekka.

"Me and Fletcher's dad thought it would a bit of fun to get our boys involved so we went halves in for Johnno at the Glen Innes potential led steer sale as a weaner," Anthony said.

"Johnno has been on our Dalby property since, feeding on a grain ration.

"That was his first show at Boonah, he'll be going to FarmFest, the Kalbar Show and then he'll head down to Brisbane for the Ekka."