YEARS of genomic testing every animal, along with full phenotype measuring to identify high performance, yield and quality, has been validated for lamb and wool producers the Michael family, with last month's launch of a world-first lamb grid paying producers on lean meat yield and intramuscular fat.

They believe the move by NSW's Gundagai Meat Processors in offering a 50 cent a kilogram premium for lamb that meets the Meat Standards Australia grid for measured quality will be the tip of the iceberg.

Many more will follow suit because the future of lamb production in Australia will be in objective carcase measurement to underpin signals to the producer for an article that ticks the consumer demand boxes, the Michaels say.

In the same vein, the South Australian producers believe the huge investment they've made in blazing the trail for a breeding value combining a wrinkle-free skin with high follicle density will pay big dividends in the future.

Last year they increased their follicle density testing to cover 800 progeny, with the aim of producing a higher value fleece, both in terms of fleece weight, yield and micron reduction, alongside non-mulesed.

Andrew and Rosemary Michael, with their family Luke, Tara, Stewart, Jemma, Alistair and Elle run Poll Merino and White Suffolk studs and a commercial sheep operation, along with a cropping enterprise, across three properties, trading as Leahcim.

The homestead is 2000 hectares at Snowtown, a 400mm-a-year rainfall mixed farm with a 3500 dry sheep equivalent capacity feedlot.

Wheat, barley, oats and legumes is cropped with the first priority to have a feedstock reserve. A fall of 20mm last week has provided a start for a full seeding program after four extremely dry years.

Typically, alongside their 3500 stud ewes, the Michaels buy client's wethers to be fattened, with a key purpose being measuring the performance of genetics.

A higher rainfall property, Panlatinga, in the south- east of SA is the main home for breeding ewes, with permanent pastures of phalaris, fescue and clovers, and kikuyu on the sandy country.

A third 7000 hectares of pastoral county east of Burra, Nolans, is effectively an opportunity station.

It has experienced a good 12 months. Dams are now full and there is a bulk of feed. As such, ewes are being lambed here and some weaner lambs are grazing the native pastures until the feed reserves become replenished at Snowtown.

The idea is that having country in different environments means stock can be shifted to where feed is. If conditions are good at all properties, opportunity livestock production happens.

Cattle are also opportunity-bought and fattened, with 300 steers run pre-drought.

The dry times of the past four years has meant the feedlot was utilised for confinement feeding, with great success.

"It was the worst period I've seen at Snowtown and we've had no environmental damage," Andrew Michael said.

"That means a much faster recovery."

Combined with the ability to move stock around, the Michaels have not had to sell down their stud numbers during the drought.

In recent years, all stud sheep have been DNA tested and phenotyped - over 3000 tested annually - to help create accurate Australian Sheep Breeding Values.

"Accuracy is so important for repeatability in breeding but also to work out different correlations," said Mr Michael, who is also on the Board of Directors of Meat & Livestock Australia.

"We sell rams to every part of Australia, and also into New Zealand and South America. There are extremes of environments within those clients so accurate ASBVs allows the ability to make informed genetic selection.

"The beauty is if you have the right animal for reproduction, meat and wool traits you only need one type of animal."

Follicle density measurements and selection for no wrinkle, supple skin has meant the Michaels have not mulesed since 2004.

"The skin on a Merino is the biggest living organ on the sheep. If we select for the right production skin there is no negative correlation to carcase traits, wool quality or production," Mr Michael said.

"Measuring follicle density is expensive but our research has shown which ones will give the highest value and best quality wools, allowing selection for a non wrinkled skin that doesn't require mulesling."

He estimates Leachim already achieves a premium of as much as $1.40/kg for unmulesled wool and says the gains from both the higher-value fleece and non-mulesed claim will only increase in the future. 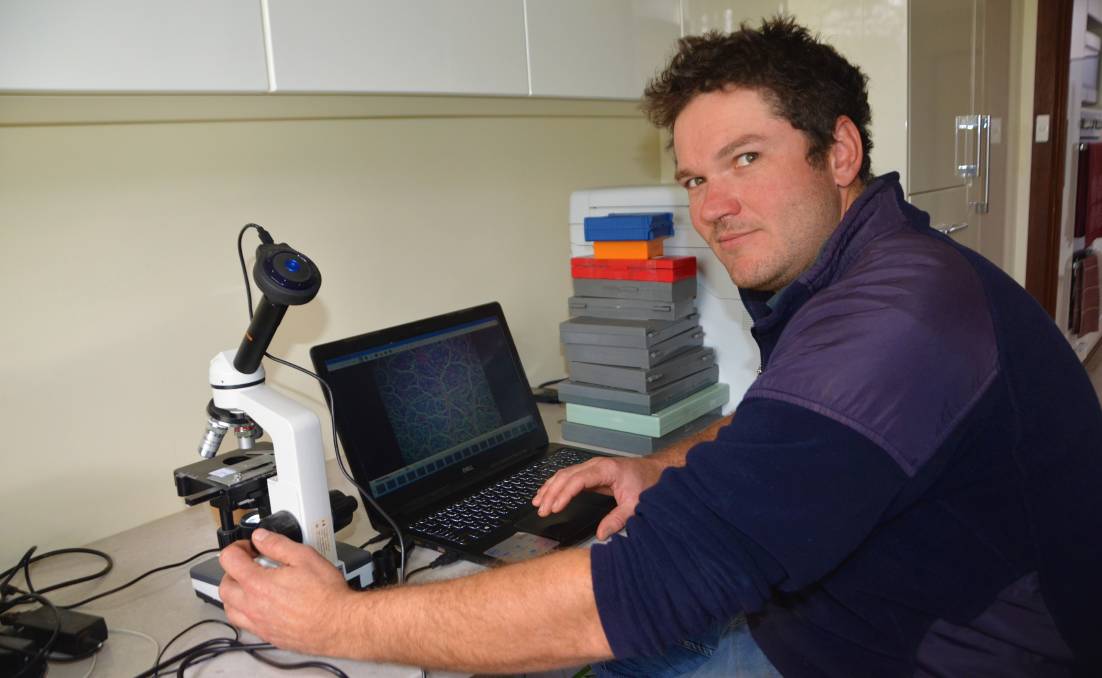 Shearing is done every six months, with weaner lambs averaging 7kg a year at 17.5 micron.

"Her fleece value is as high as you can have and at -.83 for EBWR (breech wrinkle), she will never need to be mulesed.

"This, we believe, is the future of this industry."