A favourite cow and calf among the top judges climbed to $23,000.

Red factor and homozygous poll Charolais cattle were in hot demand as the DSK stud bid farewell to a 27 year breeding program at auction on Thursday.

Some of the country's leading Charolais seedstock breeders gathered at Coonabarabran to pick from the offering of cows, heifers, bulls and genetic lots of Chris Knox and Helen Alexander at their Whole of Herd Female Sale. Cows with older cows had a reserve of $6000 which meant 15 live lots were unsold at the fall of the hammer while the embryo packages were harder to shift.

With cattle bound for Queensland, NSW, Victoria and South Australia, Mr Knox said it was pleasing to see their genetics had been accepted across the country side.

"We do love our Charolais cows but we just made a decision 18 months ago (to sell) and the season and beef markets have fallen into place for us and it's way above what we thought about 18 months ago," he said.

"There was some good value for money cows, some smart judges got some real good cows that were reasonable and there were some good cows bringing good money which is pleasing.

"It was interesting to see what cattle the good judges picked out." 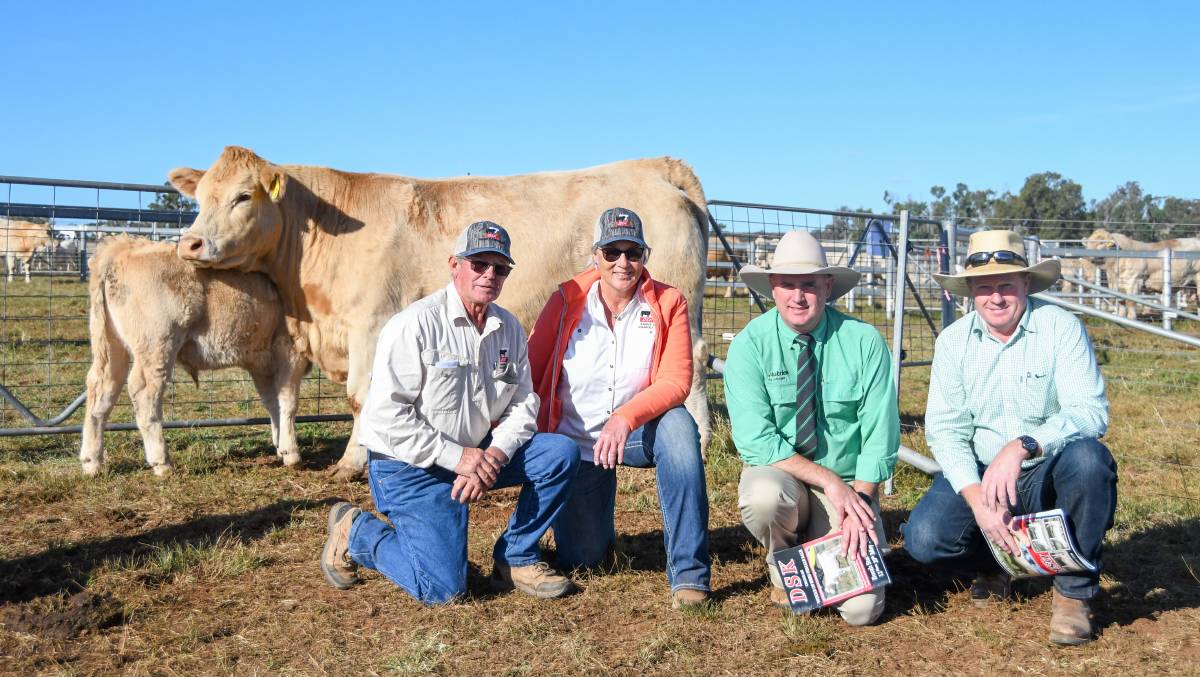 The family have retained some embryos from old bloodlines and will look to breed a "good calf or two" and sell a lead bull and heifer at the national show and sale.

All eyes pre-sale were on the five-year-old homozygous poll red factor female, DSK TGL Gorgeous M10E, and her bull calf, DSK S12E, by SVY Pilgrim who made the sale high of $23,000 paid by Calmview Charolais, Fernleigh.

She was a daughter of the highly successful Temana Golden Logie G66E who sired a large majority of the catalogue.

Gorgeous M10E was bound straight for the donor pen and was one of three purchases for Calmview's Tony Farrell who also paid $7000 for DSK WW Estelle M13E and her red factor Gold Logie heifer calf and $11,000 for DSK Easy Gina F39E and her bull calf by Palgrove Hallmark.

Mr Farrell said red factor had been an important trait when making his selections.

"We are finding more and more in the breed that the commercial guys are chasing the red factor cattle because if you put a red factor bull over a black cow you get a black calf," he said. "So we have got to follow the trend but don't steer away from the traditional white, have a bit of variety and do both colours.

"The biggest thing for us will be acclimatising them, taking them from here back to the coast, but it's an ideal time for us to take them back in winter because it's the humidity that will knock them around in summer.

"But they will get three or four months to settle in."

Yacamunda Investments of Rosetta at Collinsville in Queensland were a key supporter of the sale, securing nine live lots, mainly cows and calves but also two bulls and a heifer, and an embryo package.

Speaking on behalf of the operation, Dillon Scott said it was their first time buying DSK genetics as they look to breed their own Charolais bulls which are crossed over Brahman females.

"We have always bought Charolais bulls and we try and buy about 20 a year," he said.

"(By breeding them) we're trying to get them to live a little better and acclimatise to this sort of country." There were 38 registered bidders on the ground who had travelled from as far as Collinsville in Queensland to Victoria but AuctionsPlus also played a key role for those who couldn't be present, accounting for 38 live lots and the large majority of the genetic offering that was cleared.

Peter Godbolt from Nutrien Studstock was the auctioneer.

Read the full report in The Land next week.