CAPTAIN'S CALL: Classic Wallabies captain Lote Tuqiri took a back seat momentarily while some teammates were ready to take to the field.

AS the dust settles on the sporting finale to Beef 2021, already talk has shifted to presenting a renewal in three years' time. Beef producer Brad Hanson, Bul...

AS the dust settles on the sporting finale to Beef 2021, already talk has shifted to presenting a renewal in three years' time.

Beef producer Brad Hanson, Bullakeana, Moura, who organised the Beef Barbarians side to be a challenger to the Classic Wallabies in a novel rugby clash, and teammate Jacob Raulini are hoping for a return match at Beef 2024.

"That was just fantastic," Raulini, a former Fijian international who lives in central Queensland nowadays, said.

"There were so many people watching and they all had a great time. Hopefully we can do it all again next time when they have Beef Week."

Hanson, who cut his footballing teeth on league fields on the Sunshine Coast, was amazed by the crowd and corporate support.

"There was extraordinary camaraderie and forget what the scoreboard says. The match wasn't about who could play best - we knew the Classics were always going to come out on top.

"It was about putting on another great show to celebrate the beef industry and I, for one, would love to see it as a permanent part of the program."

AgForce Beef president Will Wilson loved his chance playing for the Beef Barbarians and dual international Mat Rogers, who watched from the sidelines, said the sponsorship of both teams was testament to the good standing in which beef was held by the corporate sector.

"I'm way too old for that stuff. I gave up playing years ago but I will acknowledge how good it has been as a spectacle and events such as this really bring communities together," Rogers said.

For the record, the Classic Wallabies won 78-17 with flyhalf Digby Ioane running riot to score numerous tries and scrum half Nick Frisby kicking goals from almost anywhere on the park. SO CLOSE: The Beef Barbarians just fail to retain possession of the football after a lineout. 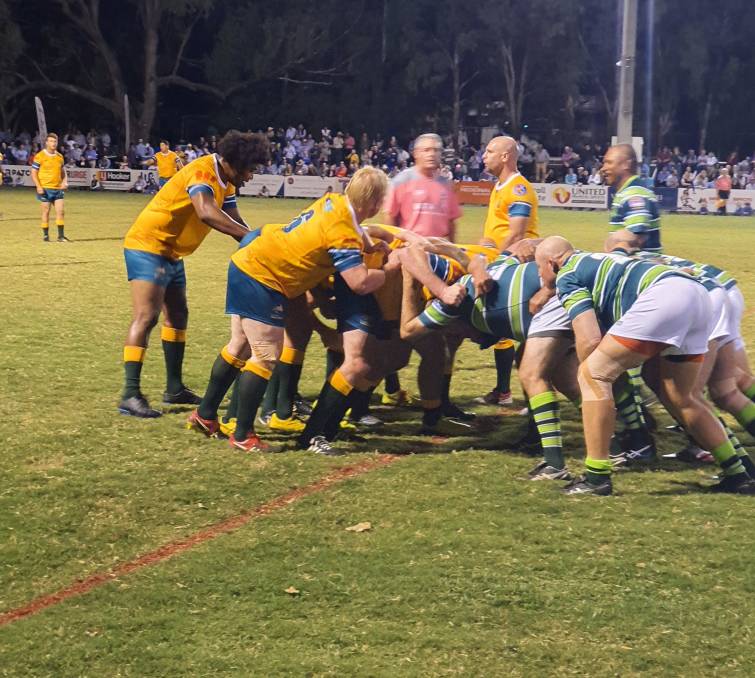 MAN MOUNTAIN: Radike Samo, set to lock the scrum for the Classic Wallabies, towered over everyone.