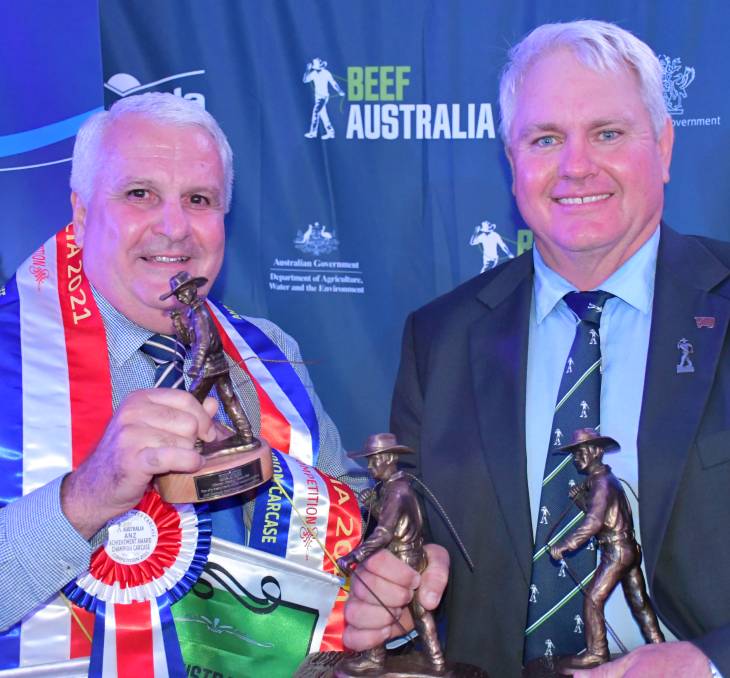 WHEN the numbers were tallied and Terry Nolan's Cooloola Blondes, Gympie, proved best in the ANZ National Beef Carcase Competition, he was a torn man.

Mr Nolan, whose family is better known in the meat processing side of the beef sector, was caught between broad smiles and tears of remembrance as accolades flowed.

"This is a wonderful reward for something that is a bit of a passion," he said.

"We've been competing here for many years and I have been a bit of a champion for yield, youth, fast growth rate economics. I'm not the biggest champion of marbling and it just goes to show the diversity of the Australian consumer.

"We've had this passion about breeding fast-growing cattle for many years and that's what we're doing. These are 11-month-old calves that are a 300kg carcase weight and we think that's pretty good.

"I like the Blonde D'Acquitaines. They're tropically adapted, fast growing, low fat and high yield.

"We've never won the grand champion before, so for us this is pretty exciting and my dad passed away a couple of weeks ago and he believed in this. He bought the first Charolais cattle to Australia, so he was into breeds that were unfashionable at the time and he was passionate and would be very happy about this.

"Young people should find their passion and build their career around it. This is not a career for me.

"Our business is meatworks. We have a small herd and this has been my passion since 1993 to breed something that was not widely known but is bred to an acceptable consumer level."

Sale, Victoria, producer Barry Hollonds attributed his success in the MSA Index Award (68.95) to a shift in farm focus.

"It's all about the meat eating quality and we have worked very hard at ensuring the cattle are on good pasture all year round," he said.

Carcase competition chairman David Hill said exhibitors should be 'justifiably proud' of the quality meat they produce considering it was less than 30 years when the MSA was established because of inferior meat.

"The progress of the industry has been nothing short of amazing," Mr Hill told the audience of hundreds including Federal senators Susan McDonald, Matt Canavan and Bridget McKenzie in the so-called Long Paddock.