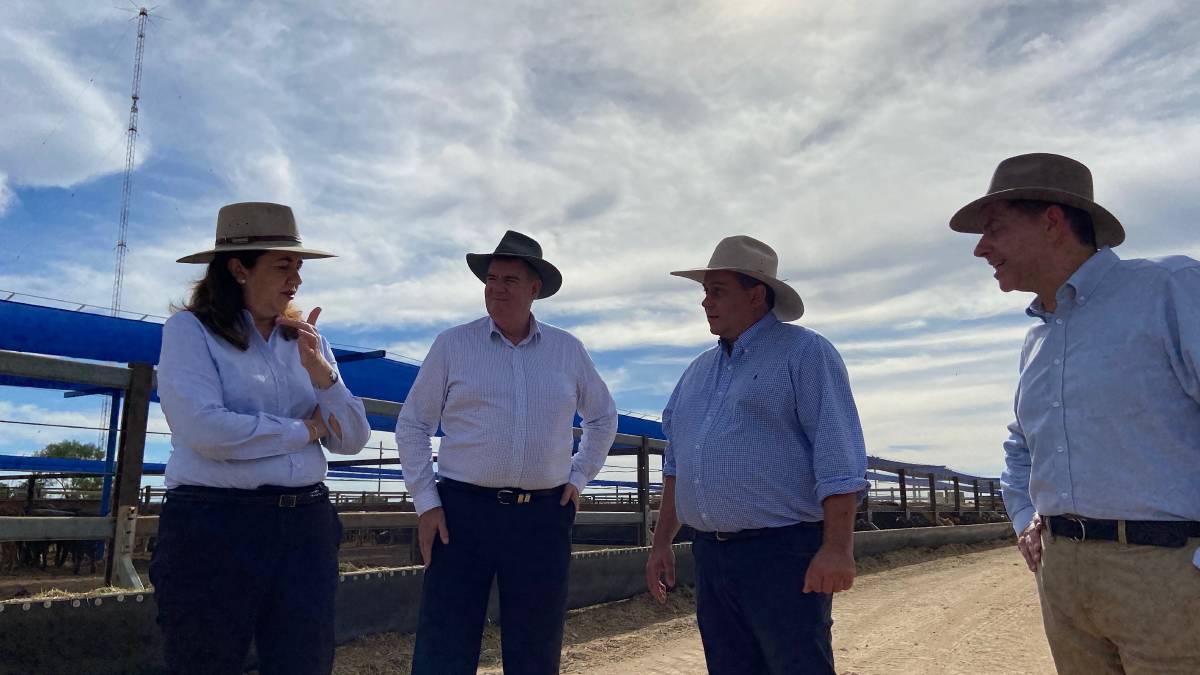 Premier Annastacia Palaszczuk visiting the Longreach saleyard with members of her cabinet,

The state government will parcel out $5 million in funding to five western councils and the Remote Area Planning and Development Board to help in the fight against wild dogs.

The state government will parcel out $5 million in funding to five western councils and the Remote Area Planning and Development Board to help in the fight against wild dogs.

Premier Annastacia Palaszczuk, who visited Barcaldine and Longreach this week with her cabinet, announced the recipients of the latest cluster fence funding under the Queensland Feral Pest Initiative.

"Not only will this money help producers reduce the impact of feral pests, it will have the added bonus of creating another 55 jobs in the regions underpinning Queensland's economic recovery," Ms Palaszczuk said.

The Premier said the cluster fencing program to date has been incredibly successful.

"It was about six years ago that I sat down with graziers outside Charleville and Longreach and they talked to me about ways in which we could assist by putting place cluster fencing to keep out the wild dogs and bring back the sheep industry in Queensland," Ms Palaszczuk said.

"My government has now committed nearly $25 million over five years to support the construction of cluster fencing and to control invasive plants and animals.

"This has led to more than 7000km of cluster fencing being erected, protecting 400 sheep-producing properties and doubling sheep numbers to 720,000 head.

"Lambing rates have also increased 75 per cent because of cluster fencing.

"The sheep industry is staging a great comeback in Queensland and we are standing shoulder to shoulder with them."

The state government has also made loans of $18 million to Longreach Regional Council to construct 2500km of fencing and $8 million to Balonne Shire Council, with $15 million in Sustainability Loans for wild dog exclusion fencing processed by the Queensland Rural Industry Development Authority.

Balonne Shire mayor Samantha O'Toole welcomed the latest funding, saying that it would make a difference to the region's determined efforts to eradicate the wild dog problem.

"There are producers who are getting a really good return to lambing now and a reduction in loss so it's making a difference.

"It's helping producers, particularly those with small stock, get back to profitability."

Agriculture minister Mark Furner said these latest allocations targeted drought-affected sheep and wool producing areas, with the goal of bringing large numbers of sheep back to these areas.

"The money will support cluster fencing arrangements in drought affected areas, including projects that complement existing activities, support the concept of shared responsibility and enhanced capability, awareness and accountability for longer term management," he said.

"Construction will support councils and landholders in creating regional jobs.

"Under previous rounds, we have seen thousands of kilometres of protective fencing built around hundreds of sheep properties and lambing rates increasing."