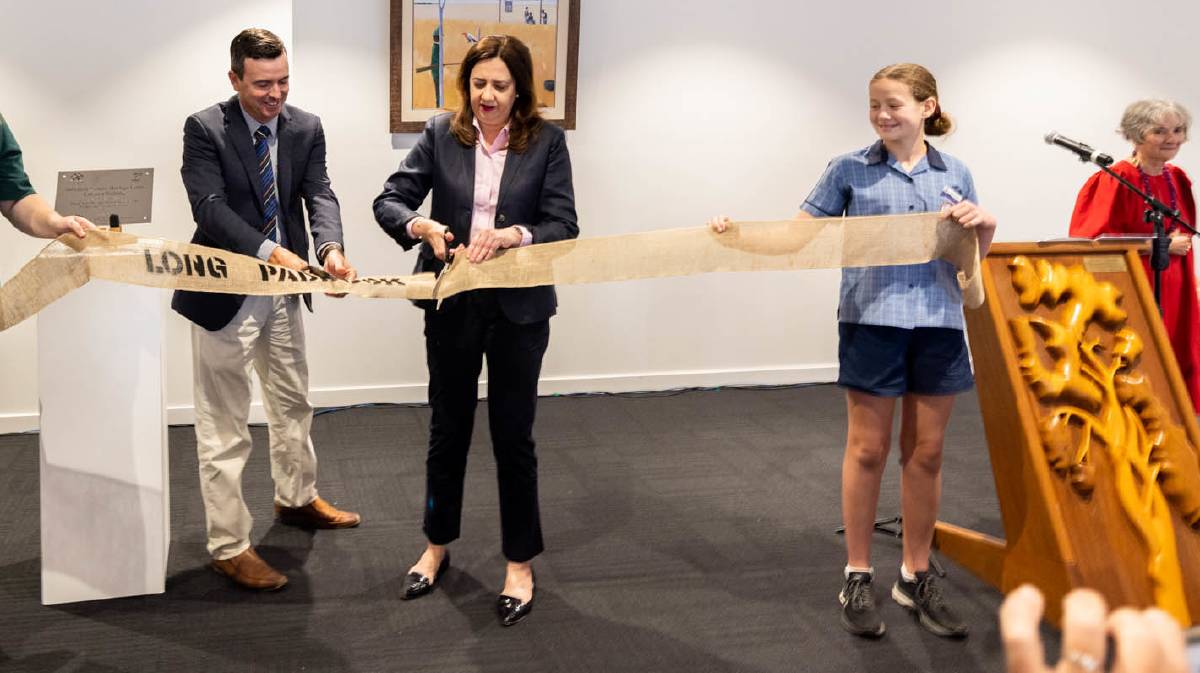 Barcaldine's place at the centre of the Australian Labor Party's mythology was reinforced on Sunday when Premier Annastacia Palaszczuk reopened the new and improved Australian Workers Heritage Centre.

Barcaldine's place at the centre of the Australian Labor Party's mythology was reinforced on Sunday when Premier Annastacia Palaszczuk reopened the revamped Australian Workers Heritage Centre.

Her visit coincides with the 130th anniversary of the 1891 Shearers' Strike and she was escorted from the railway station at the centre of the dispute 130 years ago to the Centre by a troop of Australian Light Horsemen on hand for the weekend.

The multi-million-dollar upgrade to the attraction's entrance was delivered by the Palaszczuk governmentand was described by the Premier as one of western Queensland's most important tourism attractions.

"This place is iconic. Not just for Queenslanders but for Australians," Ms Palaszczuk said.

"These upgrades will help to ensure more Australians visit this region to embrace our heritage.

The new entry building is designed to welcome tourists into the facility directly from the main street in Barcaldine, and features a themed entry to draw guests inside, a café-restaurant, a retail outlet, children's activity area, restroom facilities, covered and easy access for disability parking, and environmental utilities such as solar power and water efficient devices.

The upgrades have been completed in time for Monday's Labour Day celebrations, which will feature the traditional march on the streets of Barcaldine.

It will incorporate 17 Light Horsemen and women from troops at Mt Morgan, Winton, the Darling Downs, Roma, and the Queensland Mounted Infantry Historical Troop in Brisbane. The Light Horse troops at Barcaldine for the Great Shearers' Strike anniversary rode out to a district shearing shed during the weekend. Photo - Sally Gall.

Regiments from the Wide Bay Mounted Infantry were sent west by the government in 1891 to help police manage the unrest between union and non-union shearers.

Spokesman Jed Millen said they had been invited by the Barcaldine Regional Council to take part in the weekend thanks to the historic part the Light Horse played in the events of 130 years ago.

It was from this time that the legend of the emu plumes that the Light Horse wear was born, with one story claiming that soldiers chased an emu one afternoon while off duty, plucking some feathers out and putting them in his hat, thus setting a trend.

Read more: Chauvel at the heart of emu plumes legend

Ms Palaszczuk said the Australian Workers Heritage Centre told the story of the introduction of the eight-hour day, the 40-hour week and a lot of the other working conditions that are taken for granted these days.

"Importantly, this year also marks 130 years since the Great Shearers' Strike, which was the wick that led to the formation of the Australian Labor Party," she said.

Tourism Minister Stirling Hinchliffe, who was also in Barcaldine for the opening, said $2.2 million had been given by the government for the project, as part of the $12.2 million invested in the outback in 2018 to increase infrastructure to drive tourist visitation.

"The project supported 75 construction jobs, with 14 operational jobs created and is estimated to generate an economic benefit of $7 million of overnight visitor expenditure per annum for the region," he said.

"Bob was a key driver in this project and would be immensely proud to see the completed project," he said.

"It is fitting Bob's daughters Ms Debbie Gleeson and Ms Annette Gleeson, are continuing their father's work on this AWHC project."