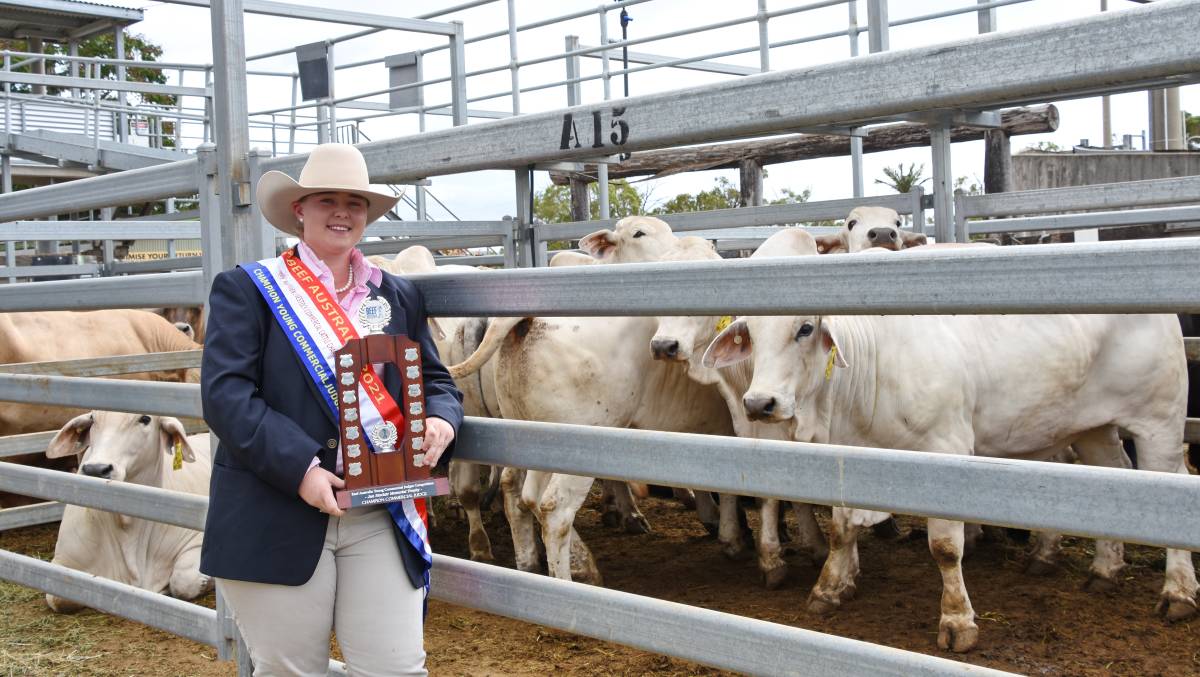 Day one of Beef Australia 2021 sees commercial cattle in the spotlight.

'First impressions are the best impressions' was the advice given to the Beef 2021 Young Commercial Judges competitors on Sunday afternoon.

At the time, competition coordinator Brett Coombe was speaking about judging cattle, but it was clear the advice also resonated with the youngsters when they got up to speak about their choices.

In the end, it was Rockhampton local Erin Goodwin that came out on top of the almost 140-strong field of young industry enthusiasts.

Overwhelmed by the win, the 19-year-old said she was surprised when her name was called to be sashed with the grand champion ribbon.

"It's quite humbling to win because it was a very tight competition that I came up against with heaps of good young judges, so I'm quite shocked," she said.

Ms Goodwin is no stranger to young judges competitions, she's been throwing her hat in the ring for the past 10 years, but this is her first big win.

"I find it quite easy to judge if it's such a consistent line-up of cattle and today you could pick which one was the clear winner," she said.

"I like judging a consistent line-up of cattle because it gives you a bit of a challenge and makes you look at the nitty gritty."

Hailing from a family operation in the Alpha district, the Rockhampton Girls Grammar alumni says key to judging cattle is comparing what you have at home to what you see in the ring.

And with a background in both stud and commercial cattle, competitors in the Young Stud Judges competition on Friday look set to have a tough opponent in their midst. Given the task of awarding competition honours, over judge Jack Wilkinson, livestock procurement manager at Mort & Co, said the youngsters did well to differentiate between the 'phenomenal pens of cattle'.

"It's one thing to look at an animal and know it's good, but to put that into words is the most difficult part," he said.

"From the age of eight upwards, for a lot of them to do that, I took my hat off to them.

"The ones that won it, they spoke about the carcase quality of the animal, not just how it looked here on the day."

When asked about the future of the beef industry, Mr Wilkinson said "it's in very good hands and very excited hands".

"I saw plenty of passion here today which will be very beneficial to the industry in the future," he said.

"It improves their confidence and competence going forward and what they pick as a good, productive, economically-viable animal."