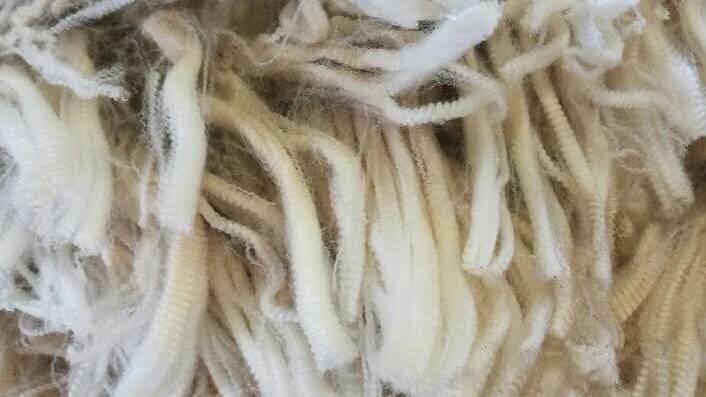 The Australian wool has made significant gains following renewed demand from China.

The Australian wool has made significant gains following renewed demand from China.

THE Australian wool market found some legs last week with a strong jump on the back of renewed demand from China, with just a sprinkling of inquiry from other destinations as well.

The story was all about superfine merino with any lots finer than 18.5 micron being strongly sought after.

These categories saw increases of up to 100c, and even a little more in the Sydney market which was playing catch up to Melbourne's extra selling day of the previous week.

Fine micron Merino types followed along, but in a more subdued manner, whilst the medium Merino types struggled to move forward, but may be in for a change in coming weeks.

The gap in price between 17 and 21 micron is now more than $10 and exporters and topmakers will be under pressure to deliver exactly on spec, but not above.

The usual accepted tolerance of 0.3 micron +/- now equates to up to 75c/kg which is way more than the usual exporters or top maker's margin.

A difference of $5/kg is a much more normal basis between 17 and 21 micron over the longer term, so natural market forces will most likely kick in at some point to reduce the extreme premium between the superfine and medium categories.

Of course, demand for medium Merino has to show up for this to happen, but given that a degree of the current demand spike is due to a particular Chinese uniform order it would not be unexpected to see further uniform orders in coming weeks, which support the medium sector as well.

In general, the Chinese uniform business has a tiered approach, with the top brass of whichever organisation it is getting 17.5 and 18.5 micron cloth, whilst the lower grades of pay are provided with 21 or 22 micron, polyester blend fabric.

The current order is said to be for the police force and is a round of new ceremonial get up in preparation for the 100 year anniversary of the Chinese Communist Party celebrations which kick off later in the year.

Of course, the army and other security forces will not want to be shown up by the police in their fancy duds, so it is a safe bet that all of these public facing organisations will get a new uniform so as to look their best.

Good news for the wool industry, but exactly when the orders will be issued is not something that is broadcast or able to be factored into production planning, such is the way of the Chinese government procurement operations.

Meanwhile, those growers producing crossbred wool look longingly over the fence and wonder when their product will get a boost.

A boost of $3/kg would take it up to the 95pc level, and even $1/kg would see it around the 70pc level, where many growers of other commodities would be thinking of locking in a forward hedge.

No doubt something will come along to boost the demand for crossbred wool down the track - probably just when the quantities begin to drop off again from their seasonal highs.

We are already seeing a resurgence of activity at the coarse end with New Zealand carpet wools having lifted off the bottom, mainly as a result of being too cheap for too long.

There is also starting to be a renewed interest in crossbred wool for insulation products and the like.

However, these products are particularly price sensitive, and despite the eco-friendly concept of cladding one's house in wool, the numbers don't stack up when the price is above the 50th percentile long term area.

Hand knitting yarn, wool/acrylic jumpers and beanies, as well as upholstery need to get a boost in activity for the demand cycle to kick in for 28 micron wool, and a decent cold winter in the northern hemisphere would assist this process.

Alternatively, we could sit and wait for a new product like 'fake fur' to come along again, which provided the demand spike last time.

Those further along the pipeline will decide this, not the buyers sitting in the auction rooms across the country, nor even the top makers and traders looking for a way to cheapen the products they are putting together.

Knitters and garment makers are starting to prepare their collections for the autumn/winter season in the northern hemisphere.

They are planning what will go into them, trying to read the minds of their customers and the consumer to get a head start on production.

Waiting until orders are actually in hand is just not a luxury that can be afforded to many, so they need to take a guess.

While lots of factors come into play, the price relativities between different fibres is always front of mind.

Having crossbred wool prices so cheap compared to Merino, particularly superfine merino will get the creative juices flowing.

With the addition of a bit of silicon softener, or a Basolan treatment to enhance the hand feel, a wool-acrylic yarn can be made to feel pretty good - at least for a while anyway.

But while those playing in the broader end of the clip get on with their thing, the people operating in the Merino world are sitting back wondering how long this will last.

With a few more uniform orders expected to hit the books, and many operating in the Chinese knitwear scene already clocking up their best quarter ever, nobody wants to mis-step and get on the wrong side of the market.

Is the outlook strong enough to load up with stock yet, or will supply suddenly come flooding out of the woodwork and drown the market?

Are the consumers in America going to offset the quiet European situation, and will the Tokyo Olympics actually get off the ground and resurrect the Japanese market?

Lots of questions which are being pondered by the trade overseas at present.

Some have decided on a strategy, but many are waiting for more certainty.