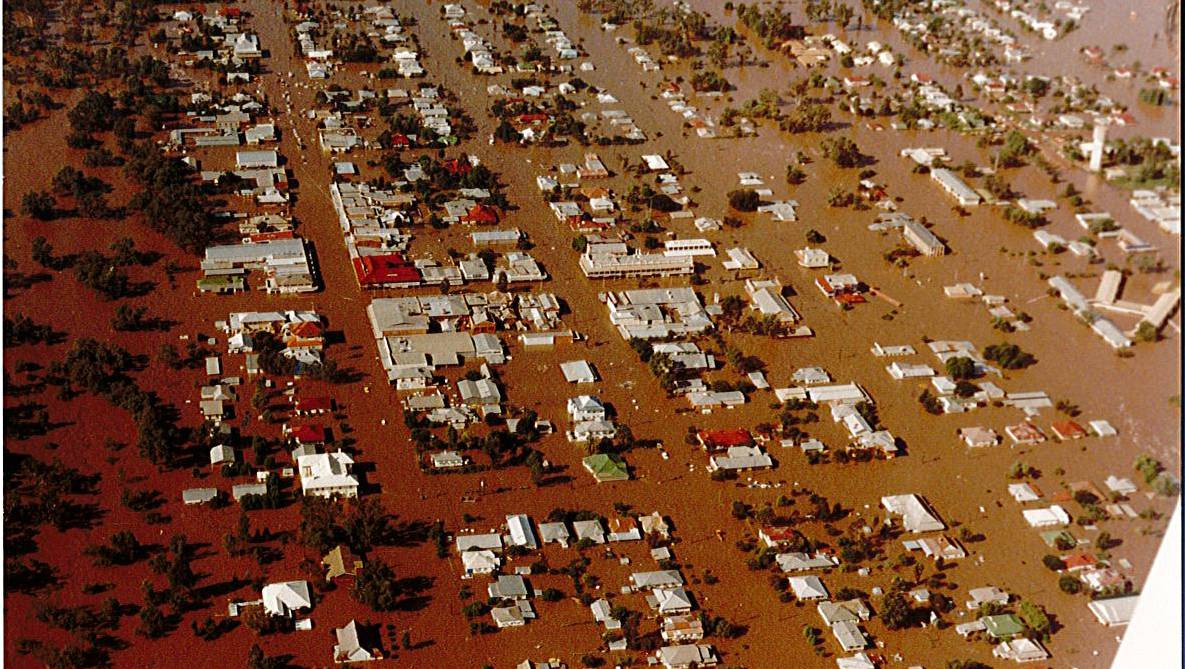 An aerial photograph showing the magnitude of the 1990 flood in Charleville. Picture - Murweh Shire Council.

It was 31 years ago, on April 21, 1990 that a flood the magnitude of which was hard to imagine swept through the south west Queensland town of Charleville.

It was 31 years ago, on April 21, 1990 that a flood the magnitude of which was hard to imagine swept through the south west Queensland town of Charleville.

The horror of the event was still evident in the memories of many as commemoration activities got underway in the community this week.

The five-day remembrance was slated to take place at the same time last year but was called off due to the COVID lockdown.

It began on Tuesday evening with a lantern parade and markets on the streets that were awash with water three decades earlier, and will conclude with a very poignant Anzac Day service.

In between, the opening of a botanic reserve, an open mic night, and a Head of the River at Gowrie Crossing are scheduled, along with daily bus tours of important flood markers, and presentations at the SES headquarters. 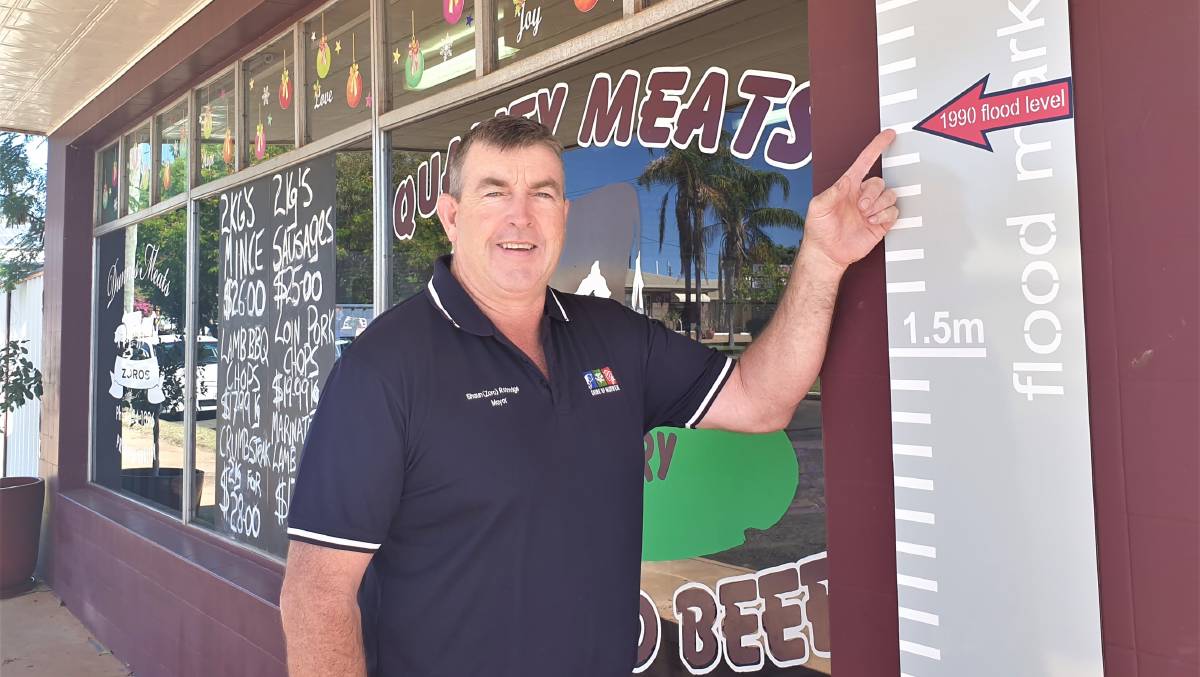 Murweh Shire Mayor Shaun 'Zoro' Radnedge has a permanent reminder of the height of the flood on the side of his butcher shop. Picture - Sally Gall.

Wednesday's presentation was made by George Donohue, who was the acting SES controller at the time, and who recreated the chilling scenes the local population had to confront.

Setting the scene, Mr Donohue reminded the audience of the saturated ground and full rivers that had resulted from a month of steady rain, when more rain arrived.

It started with flooding in Bradley's Gully, which reached near-record levels in Charleville on Thursday, April 12, but which receded quickly.

The following Tuesday, almost 250mm fell in the Warrego River headwaters that night, and the same amount the following night.

The evacuation of a family living across the river at one end of town was conducted on Thursday as a precaution, and in doing so the SES saw that the river was about to break its banks and flow back into Bradley's Gully, thanks to a flow in the Nive River.

Mr Donohue recalled the difficulty they had in convincing people that they were about to be flooded again, before the real disaster, another 200mm of rain fell in the Warrego River headwaters on Thursday night.

"With the second flood peak having nowhere to go, it raced down, cutting new channels and dislodging century-old very large river gums," he said.

"This peak caught the first one from Tuesday's downpour, 48km above Charleville.

"By the time it reached town it was rising 26cm an hour and travelling an estimated 44km an hour."

Normally a flood in the Warrego River takes 48 hours to travel from Augathella to Charleville - this time it took only 12 hours.

Flooding began in earnest on Friday, April 20 and by that evening the SES boat had trouble rescuing people because it kept hitting submerged vehicles and fences in the dark. 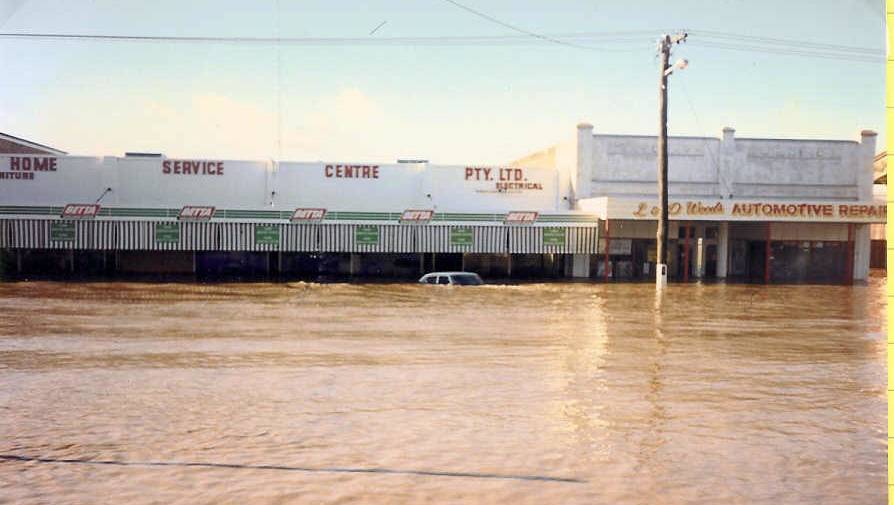 Alfred Street in Charleville at the height of the 1990 flood. Picture - Murweh Shire Council.

By 10pm the SES was unable to account for 30 elderly people and urgent calls were made to headquarters and police in Brisbane.

Although it took some convincing of the scale of the emergency - Mr Donohue said he was told he'd been on duty too long and he needed to go home and rest - state and federal governments had been contacted by the Saturday morning, April 21, requesting military assistance as fast as it could be sent.

The SES had rescued over 110 people throughout Friday night and pilots of two small helicopters, Dale Wilson and Bill Whatmore, had been doing what they could to rescue people on Saturday morning.

By that afternoon, wave after wave of army choppers from Oakey were in action, taking all up 700 people from the roof of the Victoria Hotel to an evacuation centre at the airport.

Mr Donohue said that at around 4pm, with not a lot of daylight left, they were asked to use their boat to rescue patients urgently in need of medical attention from the top floor of the Charleville Hospital.

"They had been there for two days," he said.

"The SES members radioed back and said they tried to go inside the hospital to the stairs leading up to the second floor but the water was 1.6m deep inside the building.

"The current was that strong it was throwing the boat around like a matchbox." 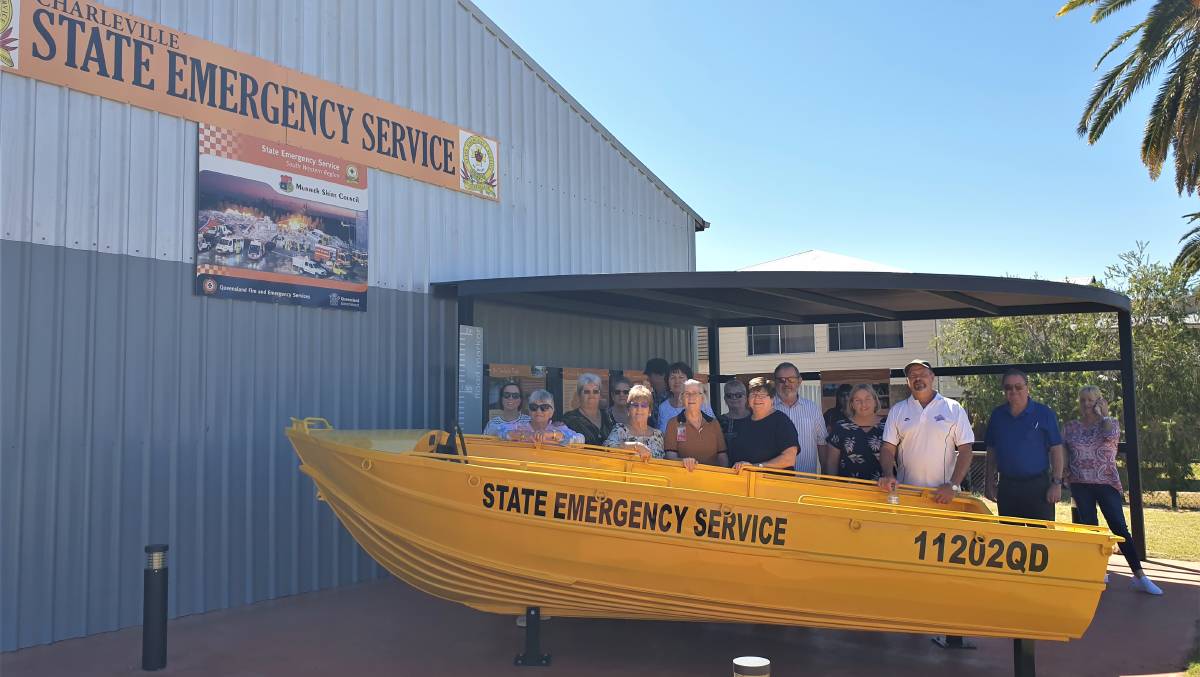 The flood anniversary bus tours are taking people to a permanent history display at the Charleville SES headquarters.

It was decided to try and rescue them by helicopter but there was no safe landing area, just a concrete block close to the building just above water level.

Mr Donohue said the army helicopter pilot who undertook the rescues, flying close to the hospital with only inches to spare, was later recognised for his bravery.

A tent city was erected by 6th Battalion RAR's 150 personnel and the army began feeding over 3000 people three meals a day.

Mr Donohue said many people had risked their lives to rescue people, and many heroic deeds were carried out.

"It took the town about 12 months to get back to any sort of normality," he said, remembering the enormous clean-up and recovery effort that took place afterwards, which saw the birth of Department of Corrective Services work camps, which are still in existence and helping rural communities.