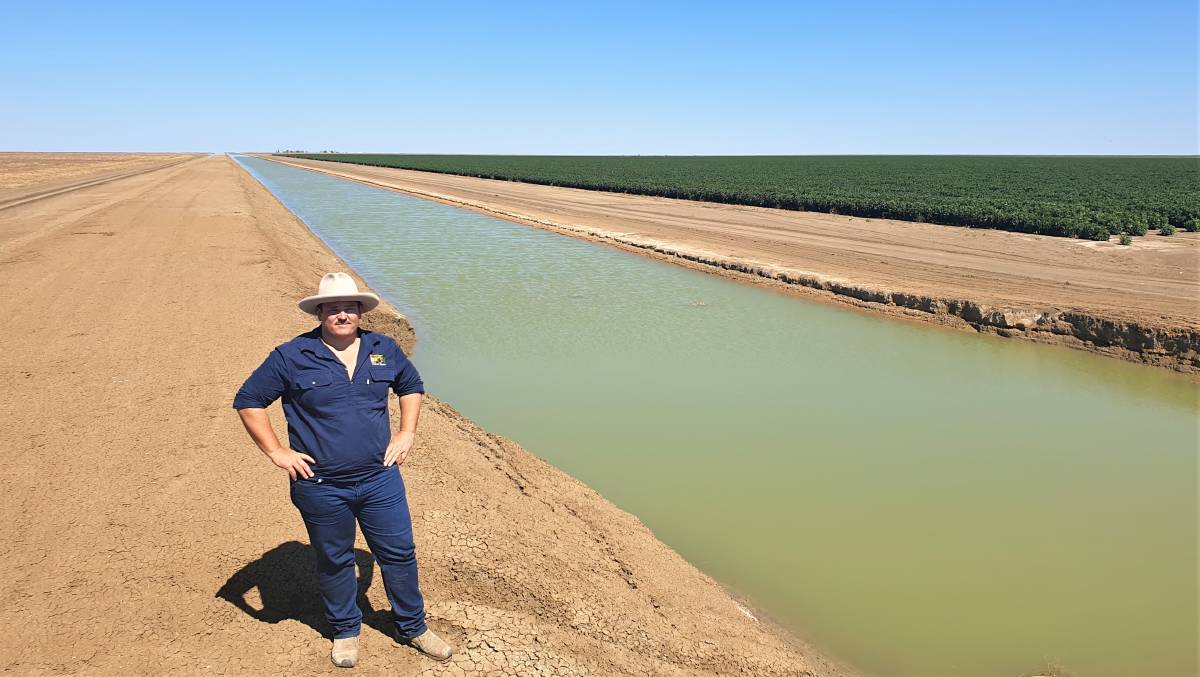 North west Queensland's broadacre cropping industry is forging ahead, thanks to a swathe of plantings of cotton and cereal crops in the Julia Creek region.

North west Queensland's broadacre cropping industry is forging ahead, thanks to a swathe of cotton and cereal crop plantings in the Julia Creek region.

The largest is being undertaken by Narrabri's Findley Farms on the 28,442ha Etta Plains, 125km north of the town, which was purchased from Alister and Jo McClymont of Burleigh Station at Richmond in November 2019, together with water allocations of 39,500ML.

Bill Findley moved from California in the 1960s to help pioneer the cotton industry in Australia, and his grandson Lucas Findley is eager to put generations of knowledge to work for the benefit of the region's embryonic irrigated agriculture industry.

He is managing the family's new enterprise and said they were very happy with what they've done in a short period of time.

Although they Kelly chained an area after they arrived, the poor 2020 season meant they didn't get the opportunity to trial any crops last year.

A run in the Flinders River meant that on January 10 they were able to plant 172 hectares of Sicot 748B3F and Sicot 754B3F cotton on 40-inch and 80-inch row spacings, using a bankless irrigation system.

While they are varieties used at home in NSW that deal well with heat, Mr Findley said they now intend to experiment with Sicot 746B3F, which is mainly grown on the Central Highlands.

He sees its advantage as growing more slowly, thus lessening the need for the use of growth regulators.

"This will be a good area for cotton for sure - it likes it drier and hot," he said.

"During the 40 degree heat the plant was in a vegetative state so it didn't mind the heat because it was just trying to grow, it wasn't trying to set fruit.

"If it did come in cloudy and get rainy, the plant actually liked that respite."

Mr Lucas said they'd irrigated the crop when it was planted and then "let the wet season do its thing", irrigating it when the Flinders River was running. 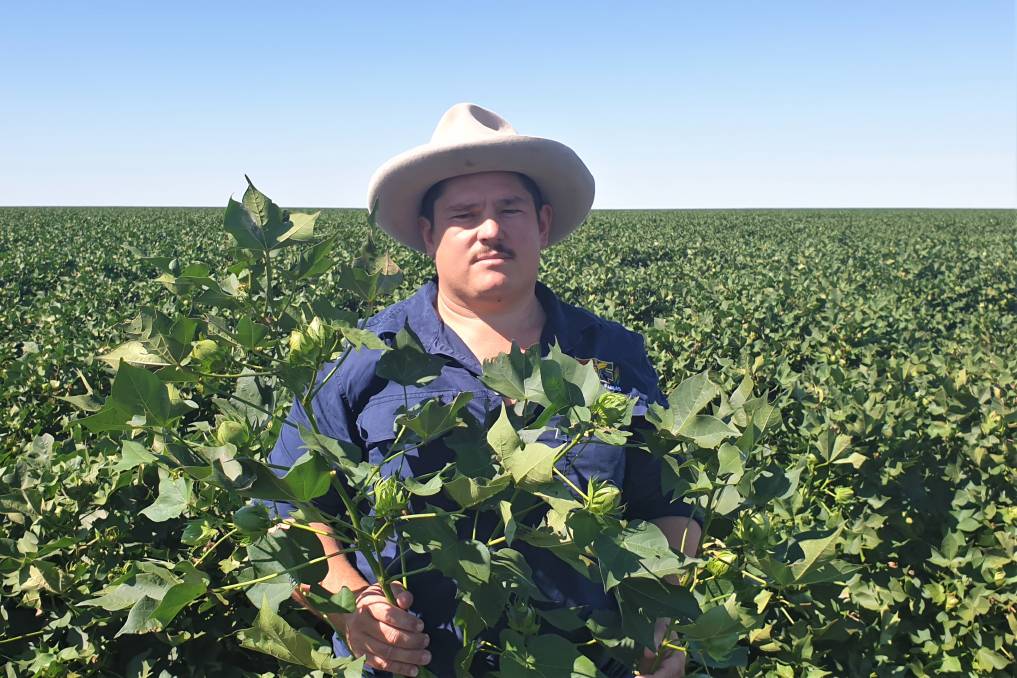 Lucas Findley shows how the cotton fruit is developing on the 172ha Etta Plains crop. He says its bolls are developing around the edges rather than through the centre of the plant, which should still yield well.

While unable to say what the yield would be at this stage, Mr Findley said they were happy with what they were seeing, as were Cotton Australia representatives who had inspected the crop.

He said it was producing bolls in a lollipop fashion similar to cotton in South America.

"It'll be exciting when we get a storage built and we can really push this crop as far as it can go," he said. "We're looking at doing 2000 acres for next year of bankless development and we can really get in there and have a go at what we're trying to achieve."

In the spirit of ongoing experimentation, the Findleys also planted 1300ha of grain sorghum as an afterthought in late February, to use soil moisture, and are happy with the outcome.

"If we'd planted it a couple of weeks earlier and had it in the program, most likely it would have gone considerably better," Mr Findley said. "This has readjusted our sights a little bit, because sorghum is an easy option." The late-planted dryland sorghum crop hasn't had any inputs but Lucas Findley expects to harvest every acre planted.

Both the sorghum and cotton will likely be transported to Emerald for processing and marketing.

While prepared to wear the 20 to 30 per cent of growing costs of delivering the cotton to a gin for now, Mr Findley said a gin in the region would be needed, to be profitable.

"The critical mass will dictate where that will be, but it does need to get addressed in the future," he said.

"Irrigation is easy to structure but dryland is more risky so a gin nearby opens up that potential for people.

"We need to grow cotton for more than a year for a gin to be built but if there's nothing nearby within 10 years, we'd look at other crops such as black sesame or irrigated chickpeas, that would reduce our costs."

Related: Richmond RAPs on the door for bold irrigation plan

Poor internet connectivity has been a challenge, and Mr Findley said they hoped to see Richmond business, Wi-Sky, expand into the region.

"Then we'll light up this whole farm, which will make a big difference because it's very hard to do what we need to do without being able to call people, agronomists, and seed companies. Also, it's a lot safer." 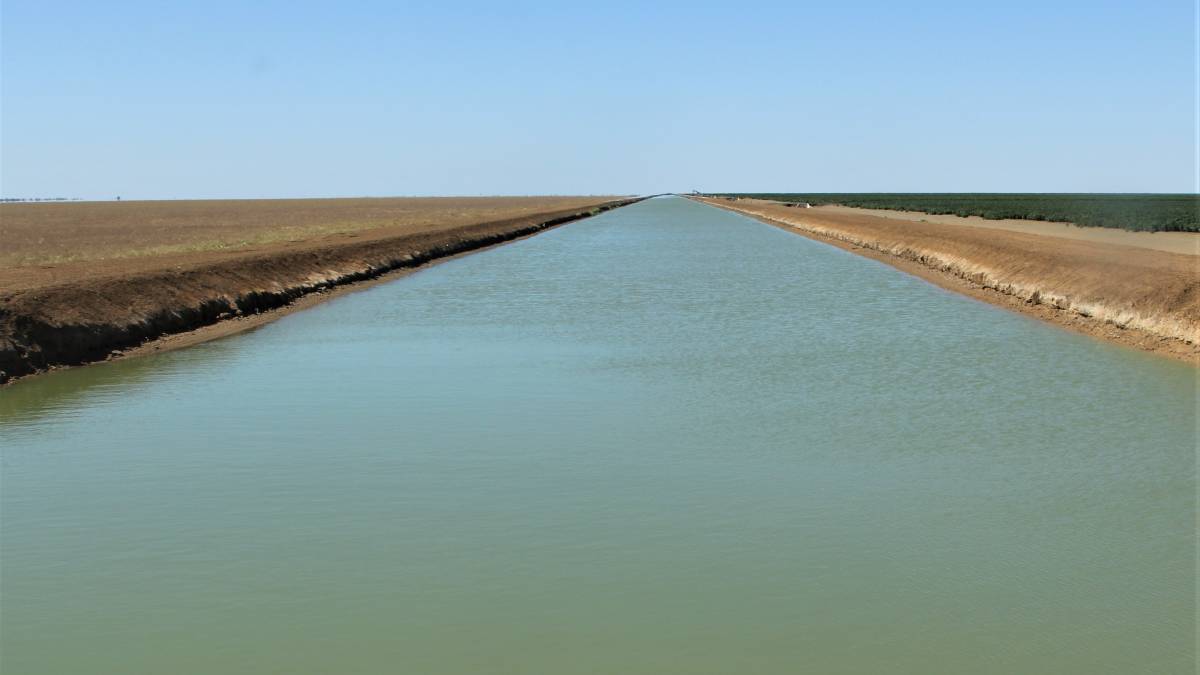 While the Findleys weren't able to grow a crop in a dry 2020, it gave them the opportunity to forge ahead with development plans. On the left is the Flinders River and a dry paddock, while the healthy cotton crop is growing on the right of the channel.

Mr Findley freely admits they are experimenting and learning every day. One of the lessons quickly learnt was to be well-prepared for all eventualities.

"You've got to have everything on site. We started the season on the back foot and we knew it, without having everything in here - seed, chemical, fuel.

"We got a lot of things bogged. You just need to be prepared."

He said the "bloody big" pilot planting was about them understanding the river and more about how crops grew in the environment.

"We're going to try that many different configurations and varieties and whatever but for a first attempt, to get a plant that's happy and healthy where it is, it gives us confidence.

"We're fully aware that we haven't seen what the north can throw at us but that's not going to stop us.

"We're that well supported from the entire irrigation cotton farming industry - tractors air-conditioned, GPS - there's definitely reasons why it hasn't happened before but the time to try and do it is now."

Mr Findley said they had been receiving tremendous support from local and state governments to get everything off the ground.

"We look forward to continuing our relationships with relevant stakeholders to create an industry that we believe is long overdue."