Lobby groups say both tiers of government need to stop playing a game of "ducks and drakes" with drought infrastructure funding.

Almost 400 Queensland farmers have been left out of pocket, waiting for their entitled drought infrastructure rebate as state and federal politicians continue to play a game of cat and mouse.

The hugely popular national emergency water infrastructure rebate scheme has been extended by the federal government for another 12 months but the Queensland government has not signed up.

The original $50 million of federal funding split between all states quickly drained in early 2020, with an oversubscription fiasco leaving more than 2000 farmers across Australia out of pocket.

The federal government topped up the national scheme with an extra $50m to address the issue as part of the 2020-21 federal budget, under the condition that states match funding dollar for dollar.

So far only South Australia, Western Australia and New South Wales have signed up to match the state funding, with pressure mounting against the Queensland government to follow suit.

However, Queensland has run its own Emergency Water Infrastructure scheme since 2013 that provides primary producers a 50 per cent rebate for drought-resilient infrastructure. Unlike the federal scheme, drought infrastructure grants are not available for permanent planting operations and desilting projects.

Federal Water Minister Keith Pitt said until the state signs up to the scheme, Queensland farmers will continue to miss out on more than $1.2m of entitled rebate.

"The Queensland government say they are waiting for cabinet approval. I hope that comes through quickly. This is clearly an on-demand scheme and we want to ensure Queensland farmers get the rebate they deserve after the overrun of the previous scheme, like the rest of the country," Mr Pitt said.

"There's 398 farmers in Queensland who have every right to expect that rebate. That's over $1m and we want to ensure that money reaches those local communities. 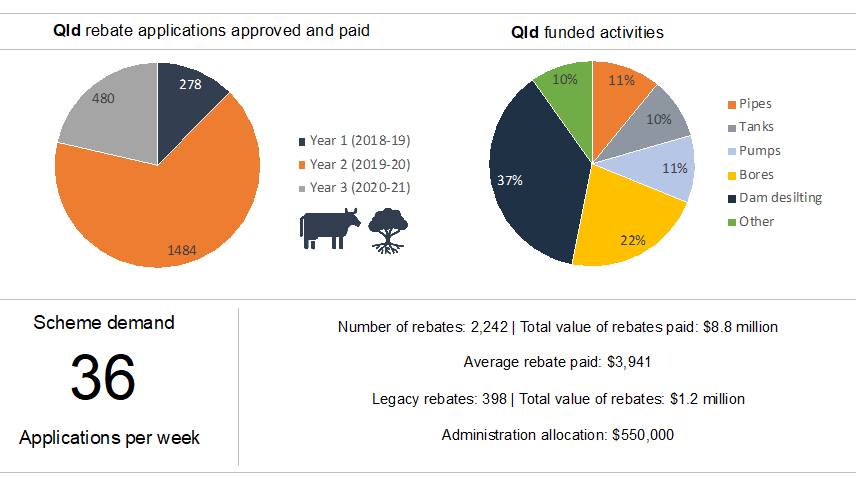 More than $1.2 million owed to out of pocket farmers. Diagram: Federal government

"Mr Pitt has the nerve to make restored federal funding contingent on Queensland stumping up more money, even though we still continue to pay our 50pc rebate," he said.

"Unlike the federal government, the Queensland government has consistently paid a 50pc Emergency Water Infrastructure Rebate since Queensland created the EWIR back in 2013.

"The federal government temporarily added its own EWIR copy, however, withdrew funding for its 25pc top-up from 2015 until 2018, and only provided a fixed amount of money when it recommitted, which quickly ran out. Queensland of course, kept paying for its EWIR with a further $4.9m paid by Queensland since the federal funds were exhausted."

"This is too important of an issue to let dither. Its time for Labor to deliver," Mr Perrett said.

"It is unacceptable Queensland farmers are unnecessarily carrying debt and incurring interest at a time when they are already crying out for support."

AgForce water committee chair Kim Bremner called on both tiers of government to stop playing a game of "ducks and drakes".

"This all about being drought preparedness, the longer it takes for the government to effectively offer the grant, the worse off farmers are," he said.

"We've had a bit of rain across the state recently but it doesn't mean anything if the water infrastructure isn't improved to capture that rain.

"We are asking for money now so we don't have to ask for money later. If we can capture water now we won't need additional support in future drought."

Queensland Farmers' Federation CEO Dr Georgina Davis called on the state government to match the available federal government funding for the scheme and invest in the future of Queensland agriculture.

"The rebate scheme provides farmers with the support they need to future proof their sustainability and profitability in the face of climate variability, something the Queensland government cannot afford to play politics with," Dr Davis said.

"The federal and state governments must work together to deliver this practical drought recovery investment, without which the Queensland agriculture sector will be unable to fully capitalise on the opportunities that are unquestionably there."