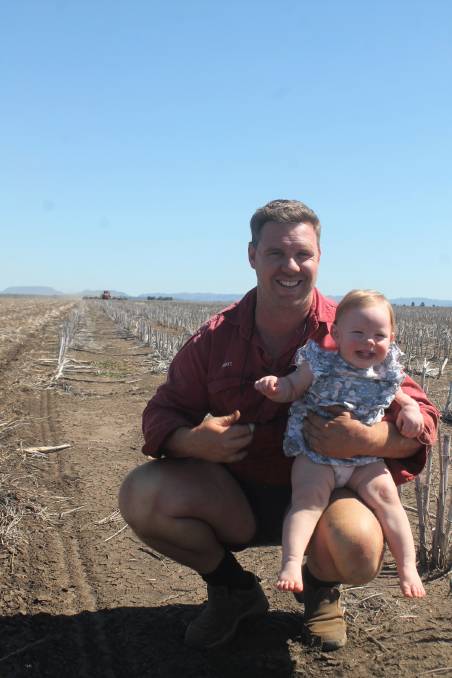 Matt Travers with his daughter Harriet, 1, at their property Boongulla, Gindie, as the chickpea plant begins in the background. Picture: Ben Harden

GRAIN growers across central Queensland have started planting their winter crops, with some opting to plant on the back of subsoil moisture from rain that fell in late March.

Fourth generation farmers and brothers Matt and Ashley Travers, own and operate their family's dryland cropping enterprise, a combined 5870 hectares of cultivation at Boongulla and Carina near Gindie.

The Travers planted 1800ha of sorghum in early January and have recently begun planting their winter crop. They plan to sow around 1850ha of Kyabra and Drummond chickpeas, and 700ha of Gregory and Spitfire wheat. 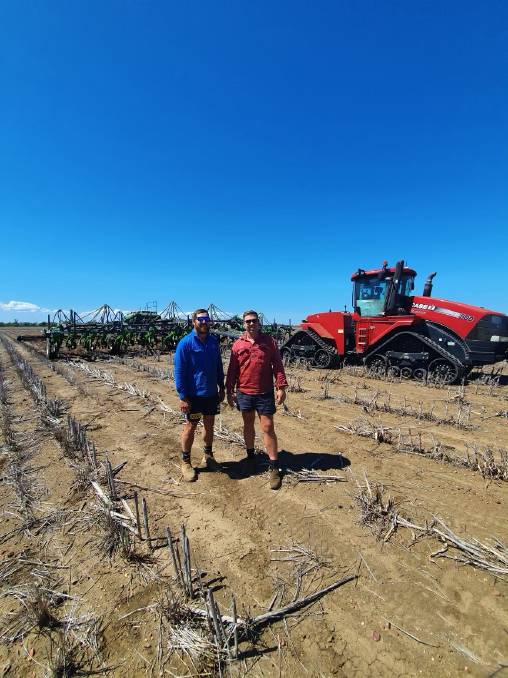 Fourth generation farmers and brothers Ashley and Matt Travers are taking a punt this season and planting 1850ha of chickpeas at their Boongulla property.

After receiving good rainfall over the Christmas holidays and early January, Matt Travers said any follow up rain since has been very patchy.

"It's been a tough start to the season, but I'm pretty confident the way the season's going to turn out," Mr Travers said.

"Depending on where you live, the rainfall has been patchy, I've even got paddocks which received better rain than others.

"It was set up to be a really good season early on, however our sorghum crop needed more rain at flowering time."

The Travers planted 60kg/ha of the chickpea varieties.

Mr Travers said they have done a deep sow of around 10 centimetres, compared to other years where they have previously gone to a depth of 20cm.

"At the moment we can't plant wheat at our Boongulla property, but we can plant chickpeas so we're just planting them four inches down," he said.

"We need some topsoil rain and it won't take much, it'll be around an inch or two.

"We have planted wheat at our Carina block, which received 25mm of extra rain around two weeks ago." 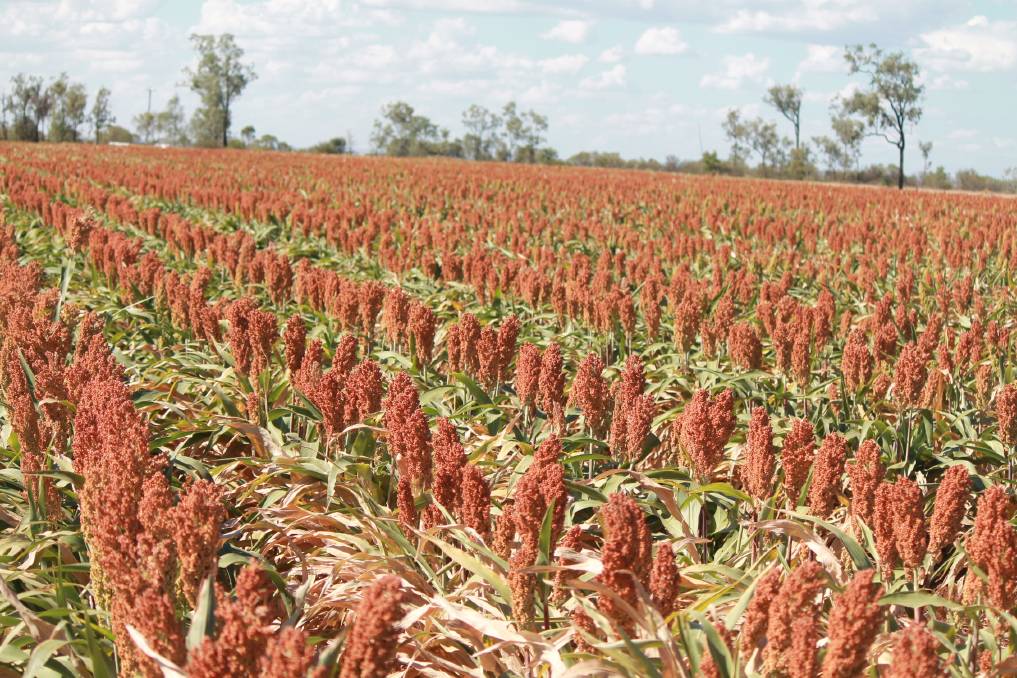 The Travers planted 1800ha of Sorghum back in January, at their Boongulla property, 45km outside of Gindie, on the central highlands. Picture: Ben Harden

The Travers plan to harvest their sorghum in May and they are a few weeks off spraying out.

Mr Travers said the 2016 and 2017 seasons were some of their better years, whereas in 2019 and 2020, they always seemed to be chasing moisture and taking bigger risks.

"It's been two of the most challenging years we've ever had on the Central Highlands," he said.

The Travers have opted for quicker maturing varieties this season and are planting them earlier to get flowering away from the heavier frost risk zone.

"The heaviest frost risk zone is mid June to the end of July, a six-week period and that's where it's going to frost, but they have happened outside of that," he said.

The Travers are still holding out hope for more rain in May and June to get their chickpeas up and running and to finish planting their wheat.

"We got to plant the sorghum with moisture, with a full profile, which is the first time in two years that we've been able to do that," he said.

"However, we still probably haven't got the topsoil moisture to plant wheat at our Boongulla property at the moment and the only opportunity we've got is to deep sow.

"If we can get these chickpeas up and running and get an early break in the winter rain, we're looking at an alright season."