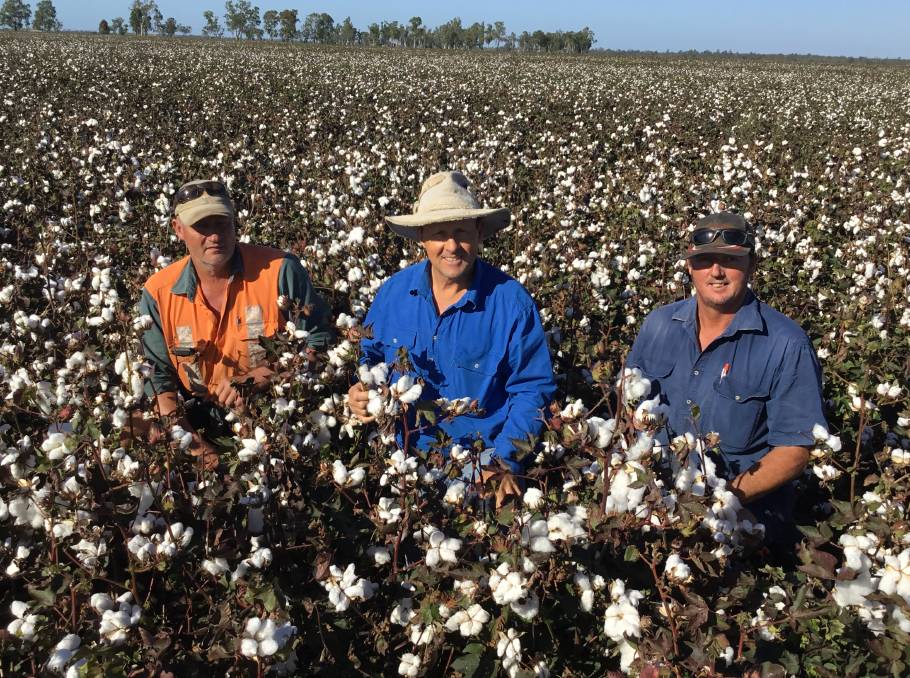 Troy Peters, Mark Bailey and Wayne Northdurft inspect the cotton on Mirrabooka, Macalister, which will be picked in the last week of April.

The start of this cotton growing season might have been tough for Macalister district farmer Mark Bailey, but it looks like he will finish the season well, and with enough water in the ring tanks for the next growing season.

Mr Bailey, who farms in partnership with his wife Jen over 1200 hectares on Mirrabooka and Alister Park, planted 184ha of Bollgard 746 and 748 varieties during the hot and dry month of November.

Mr Bailey said that due to the tough conditions he watered up his country using both lateral and pivot irrigation systems to get enough moisture for planting.

"The months of November and December were very hot and the young plants were struggling with the heat so we kept the water up until we got rain," Mr Bailey said.

"During December we ended up with 100 millimetres of rain over 10 different falls, which was enough to keep the cotton growing."

Mr Bailey said it was in January that they received a decent break in the season, receiving another 140mm.

"That really boosted the crop along as we had started to run short of water," he said.

The Baileys draw their irrigation from overland flow and flood harvesting from nearby Wilkie Creek.

They have an on-farm storage capacity of 3000 megalitres across their two properties.

The Baileys are now defoliating their crop, which will happen in three different stages.

The first of the picking will get underway in the last week of April, followed by the balance two to three weeks later.

Mr Bailey said that they are expecting 10 bales to the hectare from their first round of picking and 12 bales/ha for the second round.

"We have forward sold two-thirds of the crop for an average price of $596/bale through our cotton broker, Left Field Solutions, who markets to various merchants," he said.

Mr Bailey has been growing cotton for the past 28 years and has only missed a crop a few times over that period.

"We didn't get a crop last year due to a lack of planting opportunity and no irrigation water, so it is good to get this one across the line."

The Baileys rotate and plant their cotton into wheat or barley fallow, or a sprayed out millet crop.

Mr Bailey said the growing season has been normal in terms of insect pressure and weed spraying.

He said with a good moisture soil profile and with water in the ring tanks they would plant next season's crop from late October or early November.

"Next season's crop is certainly looking good with moisture, water, and the price is good as well."

The Baileys run a 650 sow piggery finishing pork alongside their farming interests.

Their finished pork is processed at SunPork's Swickers Bacon Factory.

About two-thirds of their product is sold to Collins Meats under contract, while the balance is sold to Jimbour Beef and Bacon.