Last weekend marked the full strength return of rugby across the Darling Downs. 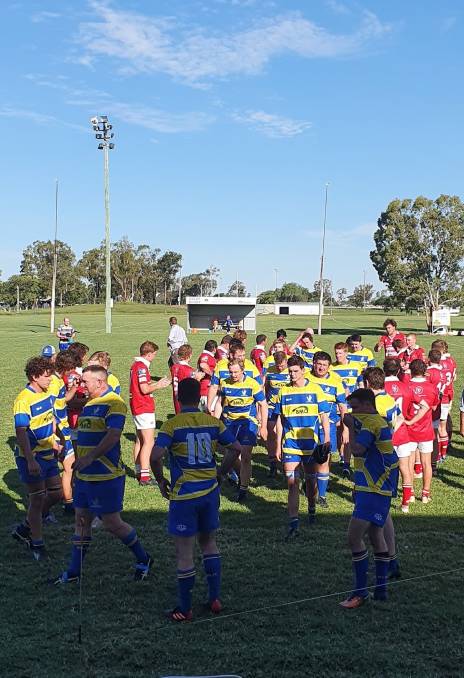 Downs Rugby's awards night will be held on Saturday July 17 at the Oaks Hotel, 25 Annand St, Toowoomba City, after a two-year break.

Downs Rugby has announced the inaugural year for the Women's 7s best and fairest award: The Charlotte Caslick Medal.

Downs Rugby welcomed back Gatton Black Pigs, Dalby Wheatmen and the Goondiwindi Emus. Notably in the Women's 7s competition, Roma Echidnas entered a second side into the ever-expanding competition.

At Riddles Oval, Goondiwindi, the Emus hosted the USQ Saints in Men's A and B grade. It was a triumphant day for the Emus, winning B grade 31-0 and A grade, a tribute to Prince Philip, 99-0, with Emus captain Sam Tweedy bagging a hat-trick of tries. The match was played in the correct spirit, and with five injuries sustained by USQ Saints, referee Andrew Hahn called full-time with seven minutes remaining. Emus' Callum Skinner earned three points towards the Mal Eiby Medal calculations.

At Heritage Oval, the Toowoomba Bears hosted the Gatton Black Pigs. Gatton worked down the reigning Wagners Risdon Cup premiers 37-19. Gatton were smarter and stronger at the breakdown and had their lineout on song, which they attacked very quickly from. Gatton's loose head prop Hahns Sperling earned three points towards the Mal Eiby Medal calculations.

In B grade, at the same venue, the Bears hosted the reigning B grade premiers Warwick Water Rats. In a scrappy match, resulting in plenty of scrums, the Bears prevailed winners 29-19 over Warwick with Bears' centre Hayden Brown scoring two tries.

In C grade, it was a 19-all draw between Dalby and the Echidnas.

At the Fish Tank, Condamine Cods hosted the Toowoomba Rangers in Men's A and B grades. In a hugely physical and tightly contested clash, Rangers piled on 19 unanswered points before a huge comeback from the Cods. Rangers' defensive effort ensured a win, 19-14.

In B grade, it was a one-sided affair, with the Cods prevailing 48-7 over Rangers. Earlier in C Grade, it was a "points-a-thon", with the Chinchilla River Rats winning 49-24 against Rangers. Cods' Elias Power earned three points towards Mal Eiby Medal calculations.

The Emilee Cherry Cup for Round 1 featured carnivals at two separate venues. With 16 matches overall, between the nine teams, the Roma Echidnas (1) are at the top of the competition's early stages on 19 points. Reigning premiers USQ Saints also won all three of their matches, with +100 for and against, on 15 competition points. Closely following, Dalby Wheatchix are also on 15 competition points. USQ's Briana Dascombe was a standout at Heritage Oval, while Roma Echidnas' Antonia Ratima-Hendry was a standout player at John Ritter Oval, Dalby.

This Friday and Saturday, April 16 and 17, Downs Rugby and the Highfields Redbacks host the inaugural U12s Challenge at Highfields Sports Park, featuring 16 teams from Downs Region, Brisbane, the Gold, and Sunshine coasts.

This Sunday, April 18, Downs Rugby also hosts the Queensland Country Rugby Union selection trial matches for Under 19 Colts Men's and for the first time, Women's XVs. Former Wallaby Brendan Cannon will be on site to mentor some of the teams, from Sunshine Coast Stingrays and Gold Coast Barbarians against our local players.