The Queensland strawberry industry is turning to cash prizes to lure workers for the winter harvest, offering up a $100,000 jackpot in a "pick an envelope" promotion.

The Queensland strawberry industry is turning to cash prizes to lure workers for the winter harvest, offering up a $100,000 jackpot in a "pick an envelope" style promotion.

The Queensland Strawberry Growers Association has come up with the promotion in a bid to combat the harvest labour shortage caused by the exodus of the backpacker workforce in the wake of the COVID-19 pandemic.

At the end of the season in October, 10 people will be selected at random to go in the draw, which will allow them to pick one out of 100 envelopes. One envelope will contain the $100,000 jackpot and the remaining 99 will contain $1000 consolation prizes. The game will be played 10 times, once for each chosen entrant.

"We knew we had to come up with something that would get people's attention," he said.

"This is something different, it's innovative to do this on an industry level.

"Hopefully this will also mean at the end of the season we have farm ready, farm fit people who can go ingo other commodities."

Mr Schultz said picking was hard work but it was a great opportunity too.

"Strawberries are a crop that has to come off every two to three days, it doesn't matter if it's hot or if it's wet and muddy.

"There's going to be plenty of people that will try it and realise it's not for them, but there are also people who surprise you and end up being one of your best pickers or packers.

"We start picking in May but we want to get people registered before then."

The overall program will also encourage workers to work hard and then spend their days exploring the surrounding region, doubling as promotion for tourism operators who have also been affected by COVID-19 travel restrictions.

"We recognise the importance of these people coming into the area for local businesses as well," Mr Schultz said.

Brendan Hoyle from Ashbern Farms is among the growers jumping behind the initiative.

Ashbern Farms was created in 2017 by two couples- Jon and Bernie Carmichael and Brendon and Ashleigh Hoyle. The enterprise now grows 27 hectares in the Glass House Mountains in the winter season as well as 11.5 ha across summer at Stanthorpe.

Mr Hoyle said generally the feeling among strawberry growers about the new promotion was positive.

"It's a pretty out of the box idea, I think we should be excited about it," he said.

"This time last year we noticed the effect that COVID-19 was going to have on the workforce.

"We managed to skate through the winter season and we really started to be affected over the summer.

"We've been dropping our crop back to numbers we think we can get out of the ground.

"We're running at about 60 per cent of what we normally would. and we've done the same for our winter season."

Mr Hoyle said their current workforce was a mix of backpackers, students and locals and he hoped staffing would be adequate to see them through the winter season.

"We've reduced the crop but I think in the back of our minds we're all still worried," he said.

"The industry has definitely had a poor name with regards to pay but the majority of the farmers are doing the right thing.

"If there are fewer strawberries coming off then strawberries will probably fetch higher prices at the supermarket but hopefully Australians will also support growers. There's a lot of work and a lot of extra money going into getting a strawberry crop this year." 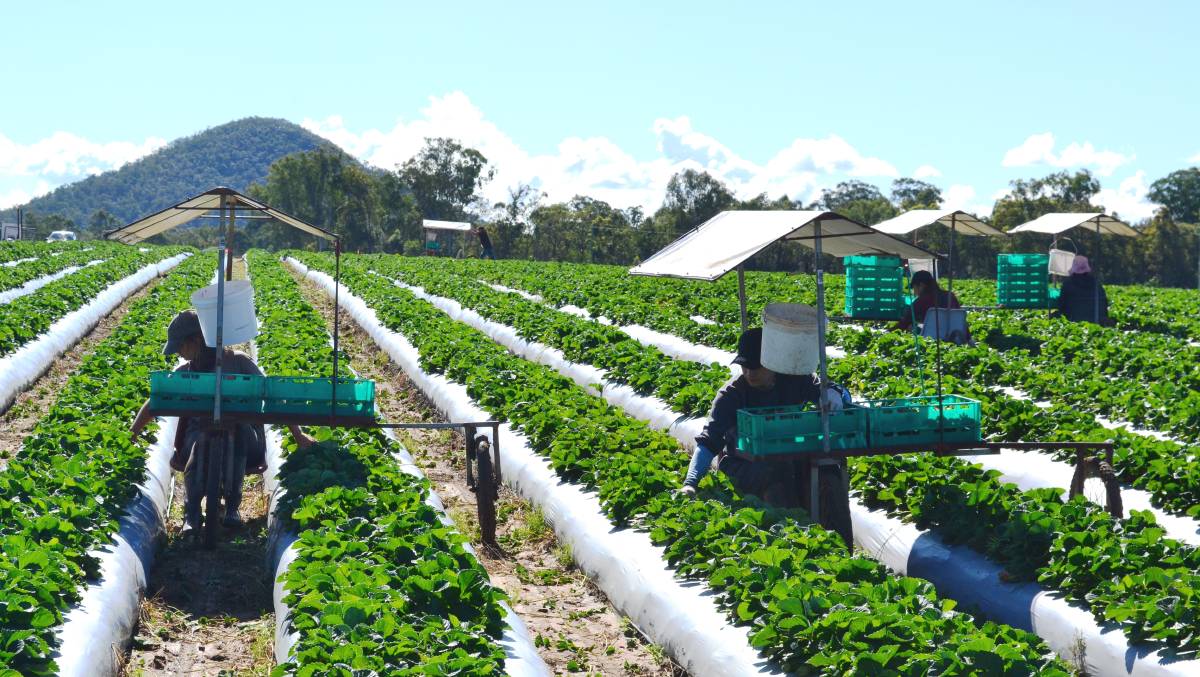