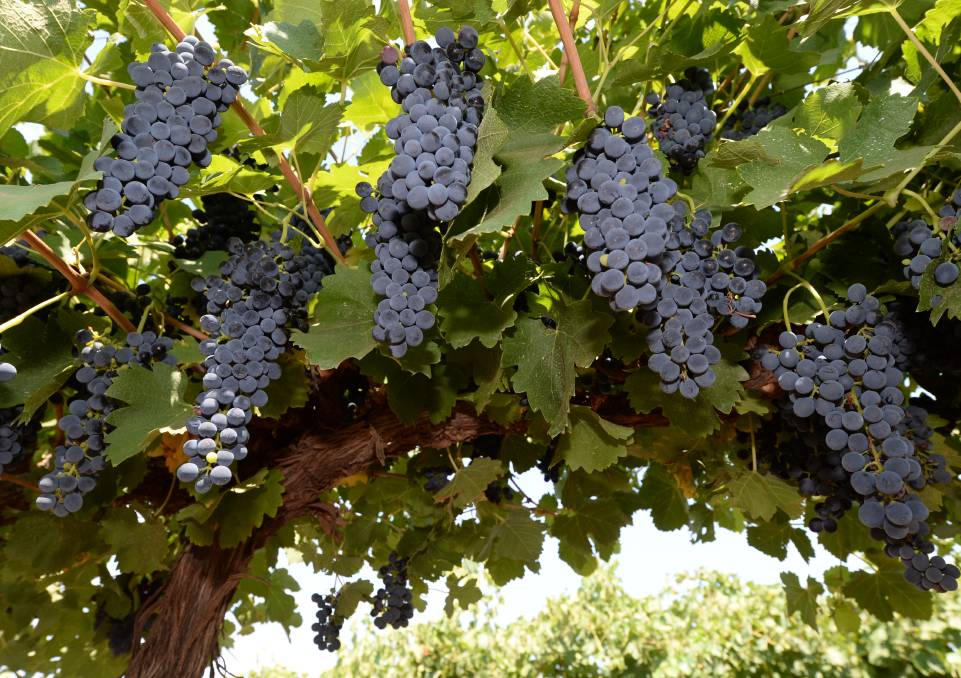 The wine industry is not tipping a fire sale of surplus stocks, but red grape variety prices have fallen about 15pc.

Grape growers are bracing for further falls in red wine grape values, but the industry is not tipping a fire sale of unsold wine stocks following the weekend's sobering news of China's five year extension to its 200 per cent tariff on Australian exports.

Peak industry body Australian Grape and Wine has forecast any uncontracted red grapes not already accounted for by winemakers will likely cop further price cuts as the harvest winds down in April.

More significantly, they generated a massive 30pc to 40pc of our total $2.9 billion export earnings.

Wine imports from Australia, including bulk consignments, have since been held up by Chinese customs authorities.

The Australian government and the wine industry hotly deny the dumping claims, with Trade Minister Dan Tehan describing the action as completely unjustifiable.

He said such decisions made it hard for Australia to keep working with Beijing to develop economic relations between the two countries.

Prime Minister Scott Morrison said China had effectively already admitted the trade strike against our wine was "some form of retaliation for Australians standing up for our values".

Wine industry leaders meet next week to consider their own options, including lodging an official dispute through the World Trade Organisation.

At the same time the sector is ramping up new export initiatives overseas with help from Canberra.

Exporters choosing to keep sending packaged wine to China will now mostly be subject to tariffs adding 218.4pc to their prices.

Also escaping the full tariff hit is Australia's biggest single wine exporter to China, Treasury Wine Estates, which owns the powerful Penfolds label and was one of several companies pleading to Chinese authorities with individual submissions against dumping claims.

Treasury, which previously boasted annual Chinese sales of about $500 million, will cop a 175.2pc tariff, while NSW-based Casella Family Brands is encountering slightly less, at 170.2pc.

Another 21 winemakers and exporters, including Pernod Ricard and Yalumba, will carry a 167pc tariff on their lines in China.

The biggest losers are set to be about 1000 Australian exporters who specifically built Chinese relationships to distribute wine, but had limited openings in other markets.

However, Australian Grape and Wine chief executive Tony Battaglene said while the Chinese move was "truly disappointing", the industry was not caught by surprise and was already focusing on driving other market expansion.

Australia currently sold wine into more than 100 countries, with some major options like the US having "a lot of room to take more".

He did not expect exporters to switch back to the domestic market en masse with a surplus of wine to quit at fire sale prices.

However, nor were there likely to be quick fixes for winemakers seeking new offshore growth "because it's very hard to sell 125m litres of extra red wine in a short time".

"There will be downward pressure on grape values after losing those sales into China," he said.

"Any uncontracted red fruit still to be accounted for at this stage will see more pricing pressure."

In southern NSW Griffith grape grower Bruno Brombal said shiraz and cabernet grape values had fallen to the $500 a tonne mark, or about $100 or $125 below 2020 values.

The Riverina region's Wine Grapes Marketing Board chairman said while few contracts were signed with prominent local wineries such as Casella, De Bortoli and McWilliams, he still fully expected processors to pay as promised.

"But you still have to grow a lot of grapes an acre to cover costs at those prices.

"Five more years of these Chinese tariffs has me very concerned, especially as many growers here need to replace old vines and they were hoping for better prices to help cover replanting costs."

Other markets out there

However, Mr Brombal, who grows about 140 hectares of red and white varieties, is also confident other markets will steadily absorb wine volumes previously destined for China.

Grape and Wine's Mr Battaglen was similarly optimistic, saying Australia's eventual re-entry into China may be possible within five years, and good growth prospects existed elsewhere in Asia as well as Europe, North America and the UK.

"Some markets are not as strong for us now simply because Chinese demand was growing so fast we were giving China more attention in the past.

"We'll work with the government to assess any options within the Chinese system and internationally, and we'll focus on growing long-term demand for Australian wine in other markets."

The government's $72.7m investment to help agribusinesses expand export markets was "a great first step towards getting on with the job of finding new markets".

"It will take commitment, but if we work hard together we're confident we can drive growth and sales in a range of markets in the coming years."