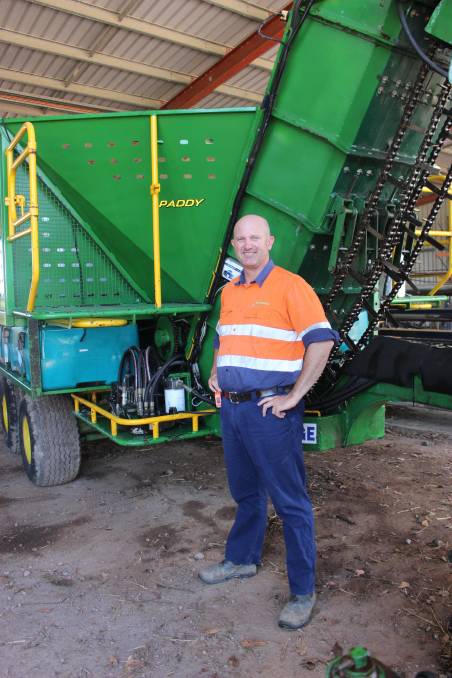 Operating partner for Racecourse Projects is George Williams, who is a fourth-generation cane farmer who grew up on the family farm at Dawlish, just north of Sarina.

The highly successful Mackay district farming operation Racecourse Projects had its foundations in October 2013 and continues to grow from strength to strength.

Over time the company has invested in more than 5000 hectares of cane land in the Mackay/Plane Creek districts. Last year more than 400,000 tonnes of cane were delivered by the company's four harvesting groups to Mackay Sugar and Wilmar Sugar mills.

Operating partner for Racecourse Projects is George Williams, a fourth generation cane farmer who grew up on the family farm at Dawlish, just north of Sarina.

A qualified fitter and turner at Plane Creek Mill, Mr Williams' aim was eventually going back on the family farm, which he still runs these days under a share farming agreement with the company.

While he doesn't get to sit on a tractor much these days, he oversees four farm managers and sets the framework and overall direction of the operation.

Racecourse Projects employs up to 50 staff during the season and as a result has invested heavily in health and safety initiatives. Over the past eight years, the farms have all been converted to a 2.4 metre, 800 mm dual row, controlled traffic system.

"It's an efficient system. There is less compaction than traditional methods, which will lead to improved water retention over time," Mr Williams said.

"We only cultivate the 'grow zone' and our harvesters only have to travel 4166 metres per ha, saving over 2km per ha in travel compared with a 1.6 metre row farm setup. That's 10,000 km per year."

"This system also reduces the amount of turning at the end of the paddock. It has given us huge savings in fuel and labour. Using less horsepower by travelling slower also means a better quality cut with less damage to the stool, giving us improved ratoons."

The farm machinery runs on GPS, and all chemical and nutrient records are electronic and come directly from the tractor. For the past three years the harvesters have had yield monitors fitted. The data the yield monitors provide allows inputs to be matched with yield potential within the paddock.

"We now have enough yield monitors to cover our entire property. This technology ensures we are not applying fertiliser where there are yield-limiting factors like water logging, grubs or just poor soil," Mr Williams said.

"We believe that matching inputs to yield potential is good economics for the business and benefits the environment by maximising input utilisation."

Cane is ratooned for six years, with a 15 per cent fallow factor. The variety selection is up to farm managers with only limited input from Mr Williams. They work with MAPS and an agronomist to determine the selection based on soil types and early/late harvest factors.

Soybeans are grown in rotation with the cane to reduce nitrogen requirements for top dressing and plant cane. The soybeans have been sold to market in previous years but where this has not been possible, they are ploughed back in as a green manure crop.

Currently there are two trials underway on the farms. The first is a multi-species trial over 12 hectares. This is looking at seedling viability and efficiency using an air seeder on a harvester during harvesting compared with using a wavy disc cultivator. Soybean crops have been planted in the trial as a control.

The second trial has involved using an app developed by CSIRO agricultural researcher Dr Peter Thorburn to look at reducing nitrogen rates late in the season for ratoons cut in October, for instance.

"For me, the ratoons we cut in October don't have the same yield potential as the ratoons cut in June, so why are we putting on the same amount of nitrogen," Mr Williams said.

"How far can we cut the nitrogen rate back in October without having an impact on yield? The initial results are looking good."

The first priority for the company was obtaining Bonsucro accreditation in 2017. Now the company is working with Canegowers Mackay based agricultural economist John Eden to obtain Smartcane BMP accreditation this year.

"We need to do the work to prove to people that we have best management practice by keeping the records," he said

"The actual farming practice in the paddock is the important part of BMP and we've been very focused on getting that right, rather than the certificate on the wall. We are constantly improving drainage and creating spoon drains and recycling pits as we fallow paddocks."