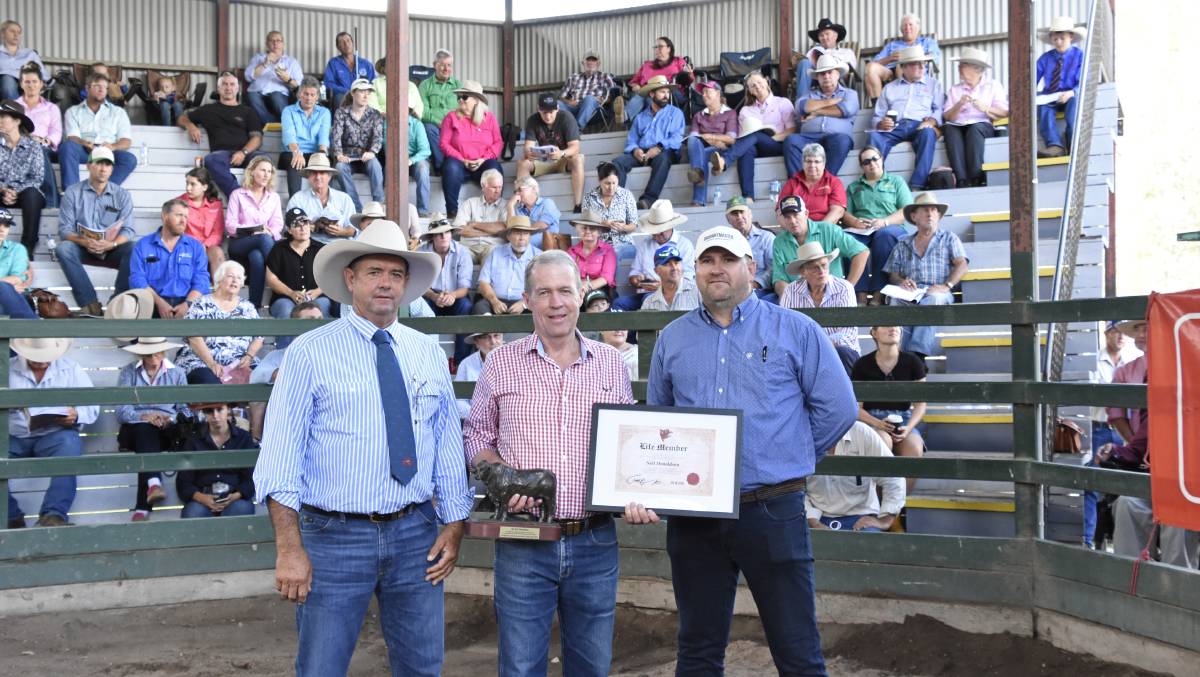 Neil Donaldson has dedicated half of his working life to the betterment of the Droughtmaster society, and has been integral to the development and success of the breed.

For almost 22 years, Neil Donaldson's name was synonymous with the Droughtmaster breed.

As national operations manager and then chief executive officer, Mr Donaldson dedicated half of his working life to the betterment of the Droughtmaster society, and was integral to the development and success of the breed.

This contribution was acknowledged at the 40th anniversary Droughtmaster National Female Sale on Saturday, where he was honoured with life membership of the Droughtmaster Stud Breeders' Society.

Mr Donaldson was noticeably surprised when the announcement was made, prior to the commencement of the sale.

"They told me I needed to come along to receive a token of appreciation, not realising it was going to be life membership," he said.

"It's certainly not something I was expecting, so I'm very humbled, proud and privileged, and really appreciate the gesture.

"Twenty years is a long time to spend in an organisation, but they were a great 20 years. I enjoyed my job, loved what I was doing and meeting all the great people of the breed."

Mr Donaldson took the helm of the society in 1997, at a time of financial instability.

"My interview was with 13 directors and I got up and said my piece and half way through one of the directors fell asleep so I thought 'well, things aren't going too well'," he said.

"I managed to get the job, but as we shook hands they said they couldn't actually afford to pay me for 12 months, they could only pay me for nine months and the other three months I had to find outside work."

Mr Donaldson said one of his greatest achievements was helping the society get to a strong financial position.

"The society went from that to the position where they could pay cash for a building (Droughtmaster House at Ipswich)," he said.

Mr Donaldson was also integral to the inclusion of the Droughtmaster breed in the Northern Beef Development project. Achievements aside, Mr Donaldson said his favourite part of the day-to-day as CEO was being on the ground with members and attending sales.

"It was satisfying to see vendors get rewarded for their efforts and see the breed progressing, seeing the quality of the bulls and females that were presented each year get better and better, and playing a small part in that was good," he said.

"Socialising with people was great, but I got a great personal satisfaction from sales going really well because to me that was seeing members succeed and some of the new members that started in my earlier years, went on to become pretty successful stud operators and that was pretty satisfying."

Ever humble, Mr Donaldson attributed his success to those who worked alongside him at the society and the members that supported him during his tenure.

"The staff and various directors and members particularly that supported things that I wanted to do - new innovative things and different things," he said.

"It's like a football team, one player gets the best and fairest award but there's lots of people in the team that have helped me along the way."