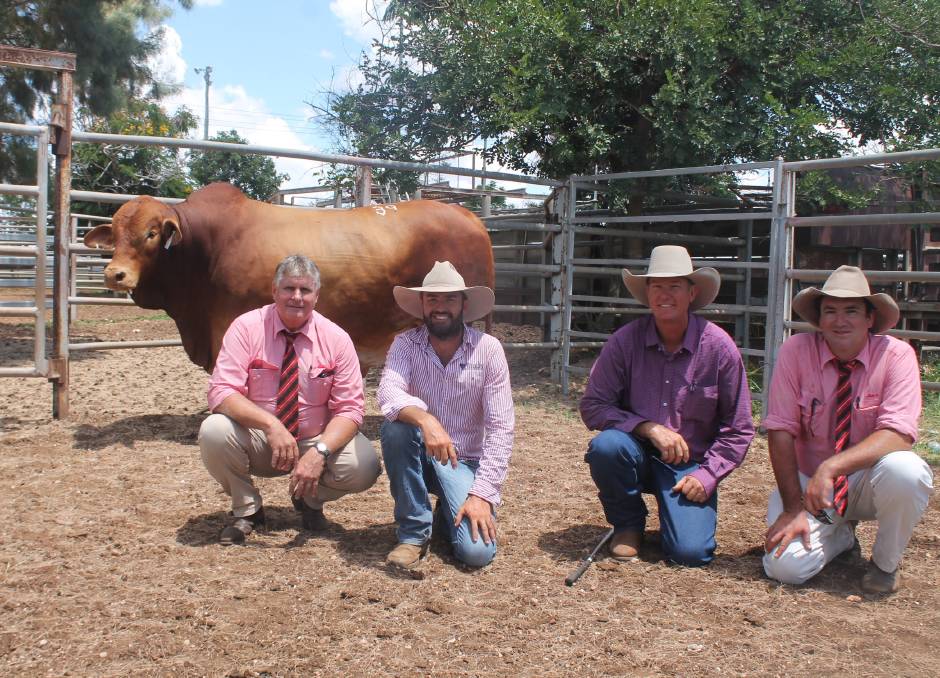 The Highlands Droughtmaster Sale celebrated their 30th anniversary in Clermont on Friday.

Eleven renowned Droughtmaster vendors offered an impressive line-up of 69 bulls for a 97 per cent clearance, to average $9164 and gross $628,500. 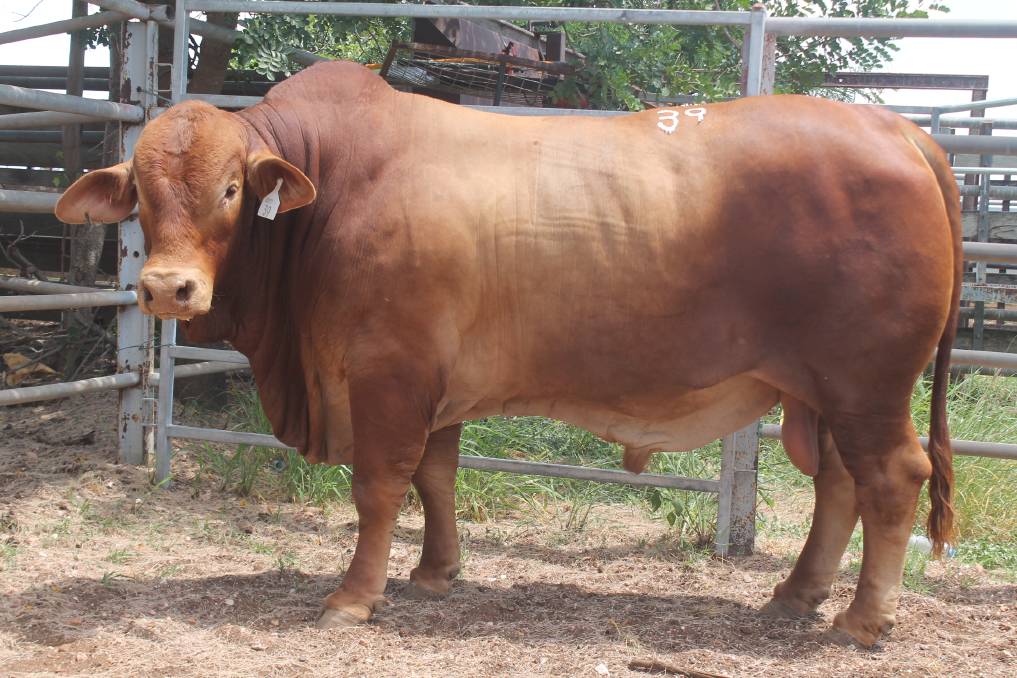 SIRE APPEAL: Huntly Aristocrat (P), had all the figures to back him in the ring to top the Highlands Droughtmaster's 30th anniversary sale at Clermont on Friday. Picture: Ben Harden.

Buyer Shane Perry, Perry Pastoral Co, Strathfield Droughtmasters, Clermont, said he was interested in Redskin Fitzroy's genetics for a while and waited for the right time to purchase one of his sons.

"I was very interested in Sam Barton's cattle and this was one of the best bulls I've seen of his stock and that's why I purchased him today," Mr Perry said.

"The bull had the volume, capacity, and overall length of body, coupled with an excellent sheath and ample bone.

"The bull's head is where it really got the big points for me; it's big, broad muzzle and plenty width between the eyes."

The Perrys are Clermont locals and run a stud and commercial operation with 200 registered Droughtmaster females and 800 commercial cows at their Fletchers Awl property.

"We're one of the original vendors, we're also a foundation stud with over 60 years of breeding in the Droughtmaster world," he said.

"This sale was really wonderful, I've been talking to the buyers after and they're happy with the purchases they made and obviously the vendors are really happy with the averages and how the sale went."

Huntly Droughtmasters stud principal Sam Barton described it as a perfect sale for the stud.

"We had good return buyers that have come from across the Highlands and further afield, and I'm really happy with how it all turned out," Mr Barton said.

"Shane and I have been great supporters of each other's cattle over the years traditionally, and we've had a few duels on buying sires ourselves.

"Shane was very interested when I bought this bull's sire."

Sam's father Peter Barton was one of the foundation members and have been selling bulls at the sale for 30 years.

"We're a commercial and a stud [operation] and my father has been breeding bulls for 50 years or more," he said.

Second-top price honours went to the Geddes family with Oasis Pablo (P) selling for $32,000 to the Horn family at Springsure.

A son of Oasis Winchester (S) and Oasis Violet (P), the young sire prospect was backed by impressive figures at 28 months of age, boasting a weight of 960kg with an EMA of 145sq cm.

Next in line was the Donaldson family with Medway Connoisseur (S), who sold for $18,000 to Furt Cooper, Nebo.

Many foundation and repeat clients were in attendance on the day, along with some new buyers.

Hastings and Sandra Donaldson and family, Medway Droughtmasters, Bogantungan, sold 10 bulls to top at $18,000, with an average of $8650.

Peter Bauer, Warrina Droughtmasters, Ravenshoe, sold three bulls to top at $6000, with an average of $4667.

The Kennys also sold one Wetheron bull at $6000.

Wayne and Ingrid York, Karragarra Droughtmasters, Emerald, sold eight bulls to top at $14,000, with an average of $8562.

Aleisha Finger, Almafi Droughtmasters, Inga Downs, Dingo, sold six bulls to a top of $8500, with an average of $6583.

Shane and Wendy Perry, Perry Pastoral Co, Strathfield Droughtmasters, Clermont, sold ten bulls to top at $18,000, with an average of $9650.

Ryan and Chloe Hodgkinson, Cairo Droughtmasters, Clermont, sold five bulls to top at $10,000, with an average of $6700.

Bulk buying honours of the day went to four operations.

Check out our photos from the 30th anniversary Highlands Droughtmaster Sale on Friday.