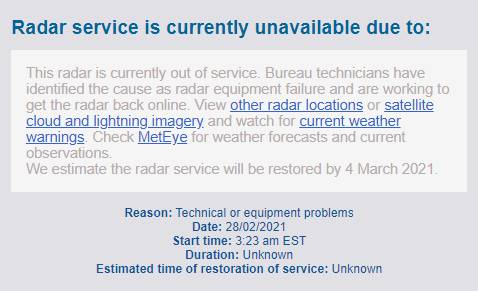 Townsville's BoM weather tower is currently out of service due to "technical problems or equipment failure".

A slow-moving tropical cyclone Niran is intensifying off the north Queensland coast. https://t.co/rVLE6i5J4ypic.twitter.com/XcySNLQ1Og

BoM has urged residents affected by the disruption to stay up to date via the Cairns, Willis Island, Bowen and Mackay radars until technicians are able to get Townsville's radar back online.

A spokesperson for BoM said they are continuing to monitor and provide forecasts and warnings about Tropical Cyclone Niran.

"We wish to reassure the North Queensland community that the issue with the Townsville radar in recent days does not affect the Bureau's ability to issue forecasts and warnings," the spokesperson said.

"Radars are not the only source when the Bureau tracks and forecasts cyclones.

"Given the impact of severe weather in North Queensland and the value radars provide in relation to situational awareness of weather, the Bureau has a number of radars along the coast that provide overlapping coverage - the Bowen radar is an excellent alternative for the Townsville community.

"Users of the BOM Weather app will notice no difference in coverage given the overlaps." 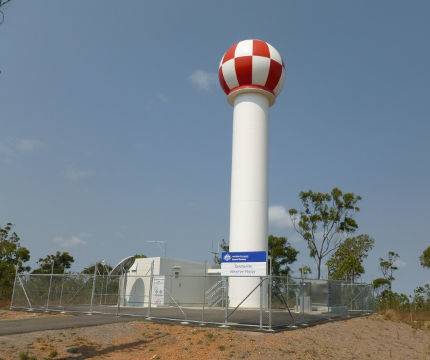 The Townsville BoM weather radar is situated on the Hervey range and it monitors severe weather events including floods, thunderstorms and tropical cyclones. Picture: BoM

BoM runs a routine six-monthly maintenance schedule for each of its nearly 70 radars.

The Bureau said they prioritise getting radars up and running as quickly as possible.

"Shortly after the Townsville radar went offline on Sunday, technicians were onsite," the spokesperson said.

"However, radars are very complex machines that run 24/7, and will from time to time, experience a significant issue that will take time to repair. In this instance, multiple components are being sourced and we estimate the radar will be back up and running by Thursday 4 March.

"Radars in North Queensland are always serviced ahead of the summer cyclone season - the Townsville radar was serviced in October 2020 and will have its next service in April 2021."

The Bureau said they have other tools the community can use to monitor the weather - including the satellite viewer on the Bureau website at http://satview.bom.gov.au/ as well as graphical weather service MetEye. 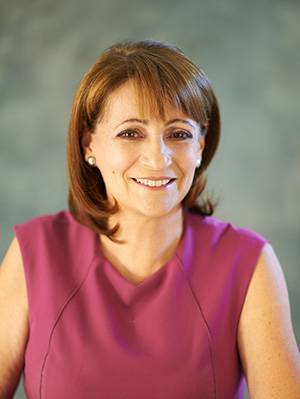 Cr Hill said the radar provides an essential service to her community about potenial weather warnings and forecasts.

"My real concern is the fact that the Hervey Range BoM weather radar is out, and the difficulty for the rest of the community to actually understand what the hell's happening with the weather," Ms Hill said.

"I rang (BoM) yesterday and the first concern I had was that BoM was not forthcoming in at least emailing local mayor's about the technical problems.

"I was told yesterday afternoon that there were multiple failures and that they've got to bring parts in.

"I've used the Bowen as they recommended, and there is a disclaimer when you do that to say that there is an issue around the information they're able to provide at this point in time.

"We have a cyclone brewing that could easily get up to a category 2 and possibly category 3 by Thursday and quite frankly it's not good enough that we're not seeing the investment in the bureau."

Cr Hill is calling on the Federal Government to invest more money into the critical weather service.

"To have service technicians only available in Cairns and in Brisbane is bloody ridiculous," she said.

"This state is nearly three times the size of Victoria, when radars go out, or there's problems with sensors, you've got to depend on someone from Brisbane or Cairns driving up to fix it or flying up.

"Now when you got inclement weather, how the hell are they going to get here."

"I call on the federal member for Herbert to put some money into BoM and make sure that this service is provided for this community during disaster season, it's just not good enough."