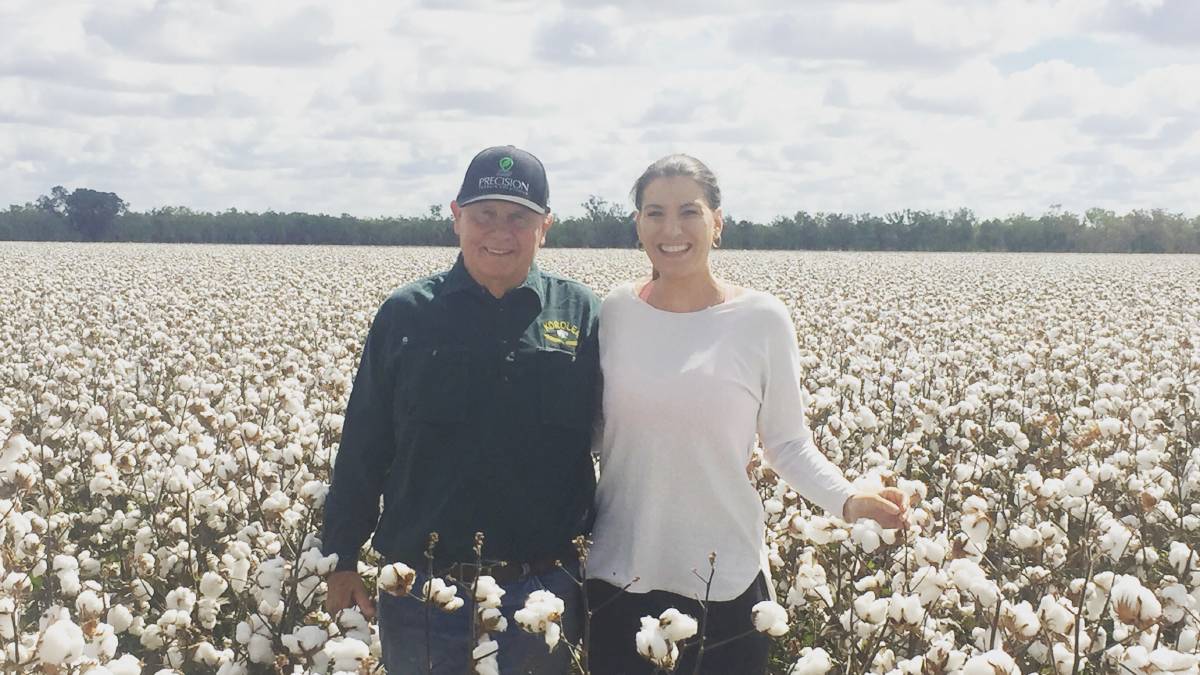 Korolea Farming's Rob Newell with Kim Coskun, the creator of Down Under Cotton.

Down Under Cotton, the brainchild of Kim Coskun, has sourced cotton from the Newell family's Korolea Farming as part of the journey to bring the product to the market.

The Newell family have been farming on their Macintyre Valley country for more than 40 years and have donated the first bale of cotton for the trial stage of the brand.

Ms Coskun said the idea was sparked when she saw a tampon commercial in 2015 and felt a disconnect between the imagery in the advertising and women's actual experiences.

She began to research and discovered that most tampons are made of synthetic fibre rayon and wanted to find a more sustainable solution.

"We're talking about something we are putting in our bodies, and a lot of people would prefer to use a natural fibre," she said.

While cotton products do exist in the Australian feminine hygiene market, the cotton is usually sourced from overseas, Ms Coskun said.

"We always want to support Aussie farmers where we can, but this was an area where there wasn't really an option for women to do that in their product choices," she said.

From there the next step in the journey was finding out more about how cotton was grown, which is how the Newell family became involved.

"I drove four hours out to the Newell's cotton and learnt so much, I even drove a cotton picker," Ms Coskun said.

"I've visited cotton farms many times since, I've gone to CSIRO for their input, I went to the Australian Cotton Conference and spoken to so many people in the industry, even the CEO of Cotton Australia.

"Rob Newell is also my mentor, he's taught me so much."

Korolea Farming is operated by Rob and Jan Newell and their son Andrew, with the business including two properties, Korolea and Royston, which cover 2500 hectares and include 1750ha of irrigated land.

Traditionally the family supply their cotton to Auscott.

Andrew Newell said they first became involved in Ms Coskun's enterprise in 2015 when he received an out of the blue Facebook message from her, wanting advice on producing cotton products in Australia.

"I gave her some advice about where to find out more and she told me she was looking into feminine hygiene products," he said.

"We were planting and she came out for a visit and met Dad, Mum and me and it sort of went from there.

"She hit it off with Dad and he thought it was a great idea."

Mr Newell said they were happy to donated the first bale of cotton and had some more to supply if the demand was there.

"It's an exciting story that there's the traceability side of it," he said.

"Kim has been here, seen it growing, knows all about where it's come from and how we work

"Hopefully it grows from here."

Ms Coskun said it had been a long process to create the product, but she has had a great deal of interest from consumers since revealing the product details.

"We will be selling online first with our stock arriving in March and also looking to supply to local pharmacies around Goondiwindi," Ms Coskun said.

"From there it will be about working with supermarkets to get the product on shelves."