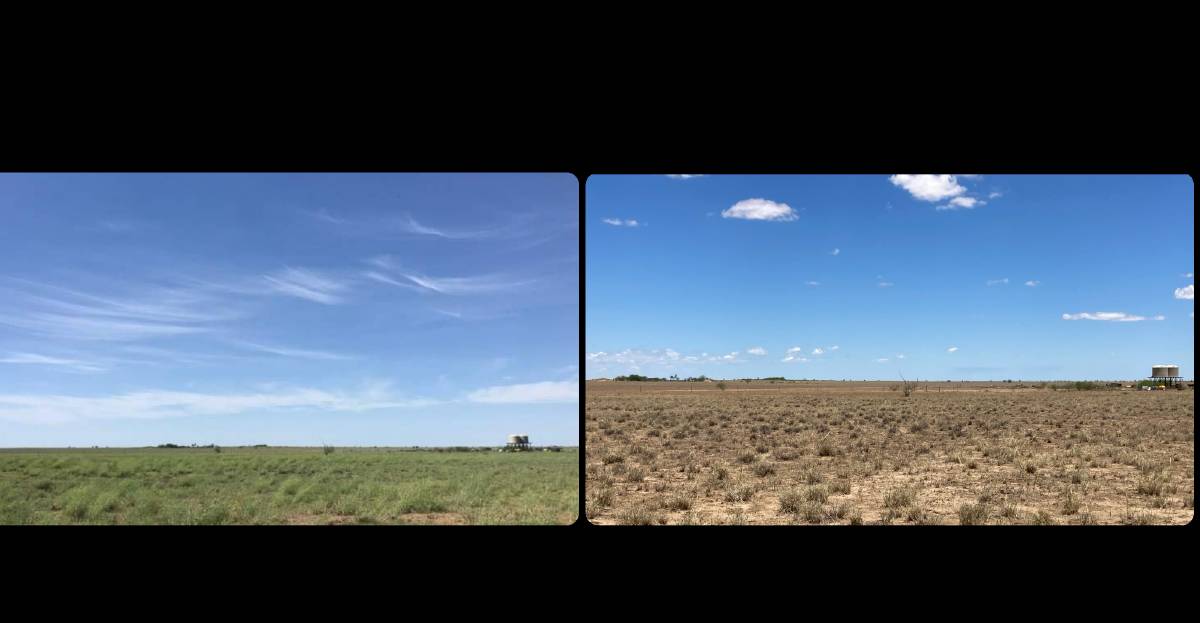 The photo on the left was taken at Wyora on January 18 after 96mm of rain, while the contrasting picture is of the same location on February 15, after another 86mm of rain, plus a grasshopper attack.

Western Queensland graziers say a dearth of readily available information on the best ways to control grasshoppers is hampering any attempt they might be able to mount to combat them.

Western Queensland graziers say a dearth of readily available information on the best ways to control grasshoppers is hampering any attempt they might be able to mount to combat them.

To date, the state government's response has been to establish a grasshopper working group and to announce a third survey of affected landholders in three years.

Tim and Jess East at Wyora, north of Winton, are among hundreds watching their pasture disappear yet again, but are struggling to find any authoritative information on safe chemicals to use.

Grasshoppers began making their presence felt on the property after 96mm of rain in early January and Mr East said it was the third year in succession they'd been "ridiculously thick".

"So far they keep hatching in the greatest concentration in the same places but spreading out more each time," he said. "I'm not sure what we'll see next year - there's nothing more to eat where they are so they may not hatch there again."

While all the property is affected to some extent, Mr East said a quarter of it was so badly affected that even if they received rain now, the country was unlikely to recover this season.

While he said he would like to invest in chemical grasshopper control, his inquiries into what to use on pasture, considering withholding periods and export slaughter intervals, had gone unanswered.

"We rang the Australian Plague Locust Commission but they're not locusts so they weren't interested.

"Then we spoke to someone from Biosecurity Queensland in Emerald, who said there was no chemical registered to use on grasshoppers.

"But online searches show us that there might be.

"We just need something in writing we can trust re concentrations and so on - we don't want to shut down our beef business after all this."

Once accurate information could be guaranteed, Mr East said graziers could undertake control on an individual level at least.

Peter Robertson at Orielton, north west of Muttaburra, has similarly been investigating costs and suitability of chemicals, and said apart from it being prohibitively expensive to spray the whole property, people weren't able to tell him what would be the most effective for his money.

"I've spoken to friends with planes and they estimate for me to spray my whole property, I could be up for $500,000," he said.

"And then, I don't know whether DAF staff need to do soil samples and egg counts - there's a lot of unknowns.

"And even if we did have answers, it's too late to do anything now.

"Even from when the grasshoppers hatched to when the damage became apparent was just a few days - you wouldn't have a chance to organise anything."

He said apart from big rain - 250 to 350mm over a week - that would drown all the eggs, the best solution would be a researched long term one so producers could be on the front foot.

"We need to do things now that will be effective for next year," he said.

The state Department of Agriculture has run a survey in each of the past two years, which Minister Mark Furner said had found that activity was centred on parts of central and north west Queensland.

"While some survey respondents reported damage, in the main it was localised to where the hatchings occurred," he said. "The primary species reported were grasshopper types that cannot fly far."

The government is planning a third survey for distribution to producers in affected areas next week to assess the impact of the latest incursion, in addition to the formation of the grasshopper working group

Mr Furner said extension staff at a number of north west and central west locations have already been talking to landholders about possible management options.

"The government will continue to work with local governments, including Winton Shire Council, as we work through this issue," he said.