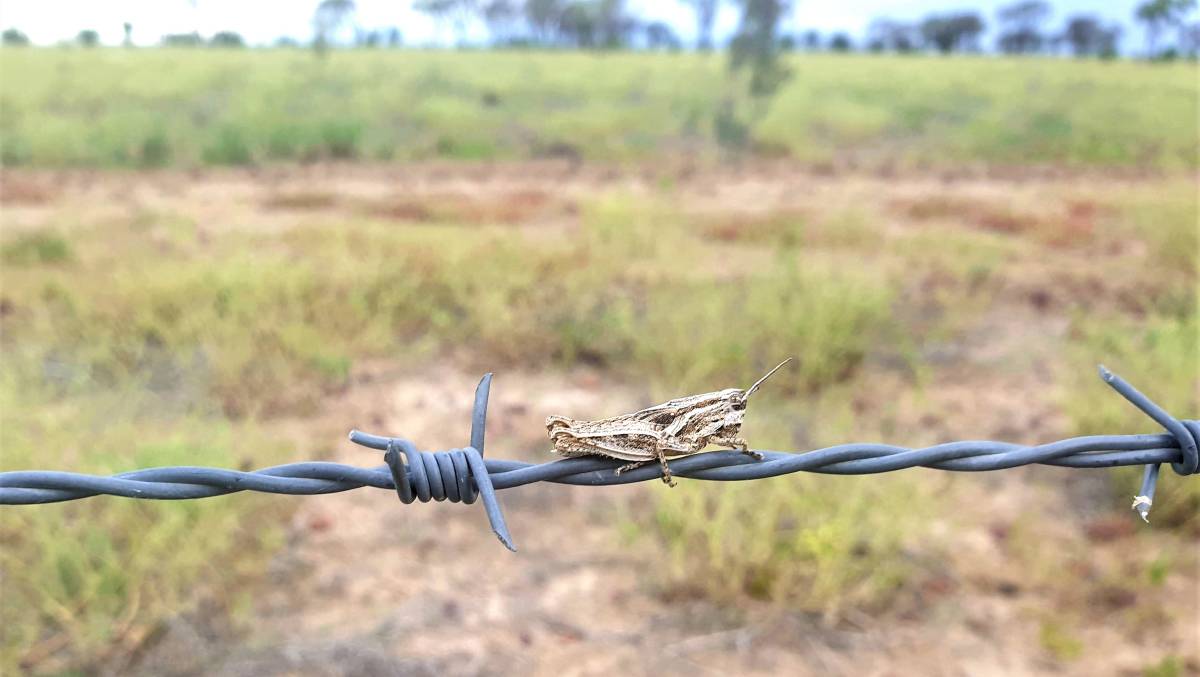 Grasshoppers are decimating pasture in western Queensland for the third year in a row.

As western Queensland producers watch precious pasture being decimated by grasshoppers for the third year in a row, the mayor of the Winton Shire has welcomed news that a working group has been established to develop a strategy to manage them.

As western Queensland producers watch precious pasture being decimated by grasshoppers for the third year in a row, the mayor of the Winton Shire has welcomed news that a working group has been established to develop a strategy to manage them.

The latest grasshopper outbreak, centred on Winton but spreading as far north as Hughenden and Julia Creek and as far south as Blackall, has been described as a plague by Gregory MP Lachlan Millar, who has called on the government to undertake urgent action to combat them.

He said that unless people saw crop dusters at work with insecticide very soon, the hoppers would move across what grass had grown in the summer's patchy rain events, with devastating effect.

"To see the emerging pasture devoured by grasshoppers when it is needed so desperately to take livestock through the winter dry is just a tragedy," he said. "I have emailed the Minister urgently asking him to get crop dusters in the air as a matter of priority."

He said the cost should be borne by the government.

Winton Mayor Gavin Baskett said his community was open to any solution so long as it wasn't onerous on the graziers involved.

"Spraying might fix the problem in the short term but the sheer area has to be taken into account," he said. "You'd also want to make sure it was a registered chemical that doesn't leave a residue."

Cr Baskett welcomed news on Monday of the establishment of a working group consisting of the Department of Agriculture, Biosecurity Queensland, Agri-Science Queensland, and the Australian Plague Locust Commission.

He said it had come in the wake of his approach to the national drought and flood recovery agency at the end of January when the impact of another round of grasshopper attacks was becoming apparent.

"Hopefully this means we'll have people on the ground to talk to graziers as soon as possible," he said. "To make it work, they've got to do the work - we want to see them on the ground here."

He also said he had invited Agriculture Minister Mark Furner to Winton to inspect the devastating impact the grasshoppers were having once again.

A before and after comparison from the Winton region, showing the impact of grasshopper infestations.

Mr Furner said that Biosecurity Queensland focused control measures on three migratory plague locust species that may have the potential to cause widespread economic agricultural damage.

He said the department would be conducting a grasshopper impact survey over the coming weeks, available via the Futurebeef website and on request.

Queensland Country Life reported a year ago that the department had launched an online survey on the density of grasshopper numbers but no results were available on request on Monday.

The Winton shire has been conducting its own survey, asking local landholders whether their property was affected, how many times in the last five years they'd been hit with grasshoppers, to estimate the area affected, and to provide a ballpark figure of their economic loss.

The shire's agriculture and rural development portfolio leader Cathy White said the shire was being proactive as they realised nothing would be done without data to back their assertions.

"It doesn't seem like any research is being done, as if it's in the too hard basket," she said.

"People out here have borne the impact of drought for years and then when they get a little bit of hope, this happens.

"It would be economically sound for the government to pay for research so that people can help themselves, rather than have to ask for a handout, I'm sure."

Cr White said she hoped other shires would see the value in undertaking a similar sort of survey to add their voice to the call for solid science to be put behind grasshopper management in western Queensland.

Cr Basket said he had put the issue on the agenda at the Central West pest management group meeting at Blackall this week, being held in conjunction with a Remote Area Planning and Development Board meeting.

"We can't just sit back and say, this is the new norm - we've got to do something," he said. "We need to get onto it now, or there'll be no reason it won't affect people for a fourth year, next year."