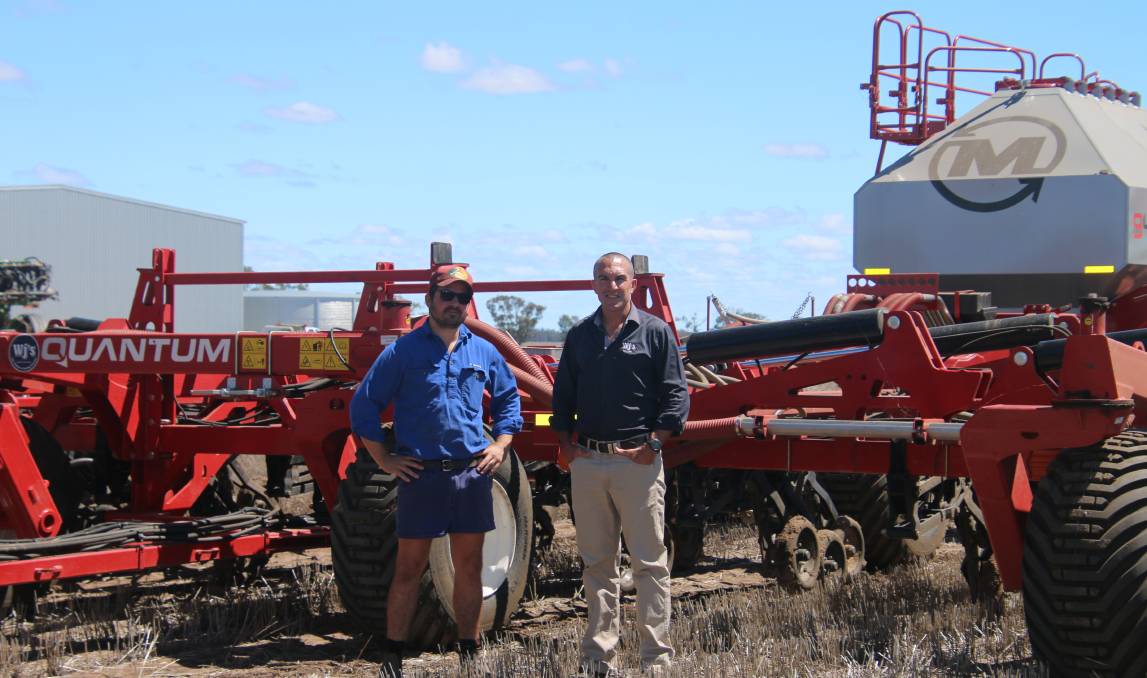 A Moree region agricultural contractor is singing the praises of his new Morris Quantum air drill.

Jordan Cosh, who runs a farm contracting business based at Pallamallawa east of Moree in north west NSW, is pleased with the performance of his new 18-metre Morris Quantum air drill.

Despite the drought in recent years, the seeding contract program averages about 15,000 hectares a year.

Mr Cosh has been a long-time fan of the Morris brand of tillage and seeding equipment, helped by a strong relationship with Moree dealer, WJ Matthews.

He said the new Quantum drill ticked a lot of boxes for minimum till seeding with narrow shanks throughout the region.

"We plant at about 10 kilometres per hour and there's minimal soil throw," he said.

"With the narrow shanks we recently went into a six-tonne (per hectare) wheat stubble coming out of pivot production and we inter-row sowed mung beans straight into it."

"We use the same tine, boot, ram and press wheel as well as a Dutch Industries single shoot point for everything,'' Mr Cosh said.

"We just run one in, one out, lifting up tines and turning the taps off,'' Mr Cosh said.

Like most of the contracting equipment, including spray rigs and spreaders, the seeding bars are set up to suit controlled traffic farming for the region.

They dig to depths of up to 15cm (6in), generally into moisture.

He said the Quantum was a more solid bar than the C2 Contour drills, where, in tough soils, wheels could lift off the ground a little - "not that we have ever put a welder on them''.

"The Quantum has a strong frame which is a good indication that Morris is listening to what customers are saying. We had no dramas at all,'' he said.

"There's no walking beam, just a single tine and bush and the bushing system is good. Day-to-day maintenance is minimal.

"It also folds up nice and narrow, and, with the large flotation tyres, it is nice and smooth down the road, which is great for contracting.''

Mainly operating in large paddocks that can be up to 1500ha with 4-5km runs, Mr Cosh said section control technology with the air carts was not a strong requirement, however he had started to use the variable rate application control system.

"We have started varying the rate of fertiliser and it's all worked perfectly.''