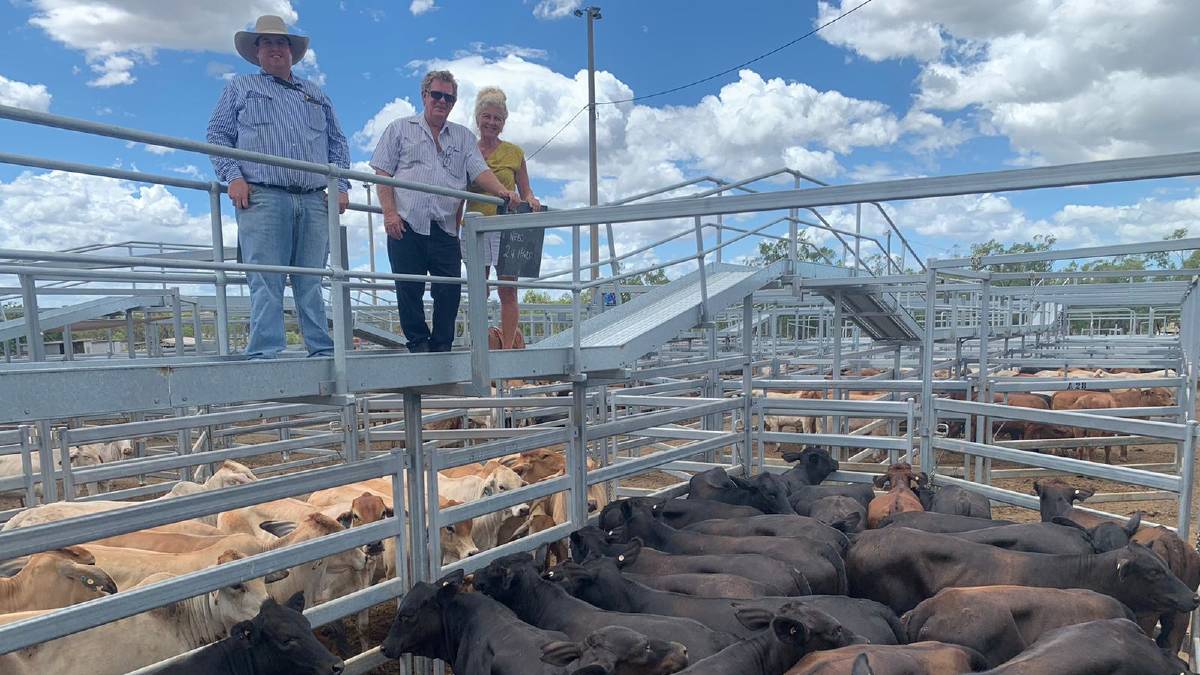 Joel Dawson, Brian Dawson Auctions Livestock and Property Marketing, with David and Christine Roberts, Finch Hatton, who bought 24 No 0 Brangus heifers for 464.2c/kg, which had an average weight of 297kg to return $1381/head for vendor EM and RF Bella, Nebo.

Last week's yarding at CQLX Gracemere was capped to 2300 head last week to cater for the February All Breeds sale earlier in the week, a decrease of 2270 head from the previous week.

Last week's yarding at CQLX Gracemere was capped to 2300 head last week to cater for the February All Breeds sale earlier in the week, a decrease of 2270 head from the previous week.

Quality was good throughout the yarding drawn mostly from local areas. The usual processors and feeders were in attendance along with a number of additional restockers.

A southern operator snapped up a line of Droughtmaster heifers for 490c/kg to use as breeders.

G Perry from Nine Mile supplied the Droughtmaster cattle, with the heifers weighing in at 234kg to return $1150/head, while a local backgrounder secured the steers from the same run for 550c/kg, which weighed 265kg to equal $1460/head.

Morgan Harris, TopX Gracemere, said all young cattle sold to a firm market, and the heifer price had climbed compared to last week, with the average price for yearling heifers between 434c/kg to 489c/kg.

"Buyers chasing breeding stock, as well as backgrounding cattle, were dominant in the heifer market and the prices reflected the quality presented," Mr Harris said.

Yearling heifers sold to 483c/kg for those under 280kg, recording averages from 434c to 489c/kg with the major run going to processors.

Bullocks to processors made to 375c and averaged from 358c to 370c/kg relative to finish.

In the heavier categories, a quality 443kg Santa Gertrudis offering from S Osborne returned $1942/head when bought for 426c/kg.

Barmoya vendor, G and L Blamires, had a good result for their 512kg Brangus steers that reached 400c/kg to return $2051/head.

For the heifers EM and RF Bella, Nebo, made 464c/kg for their 297kg pen which returned $1381/head. The Brangus offering will head north to Finch Hatton for buyer David and Christine Roberts.

Demand for cows and calves pushed prices to average around $2000/unit, while David Smith, Marmor, topped this category with a quality Brangus pen that reached $2800/unit.

Looking ahead, Mr Harris believed the yarding size would bounce back to the usual numbers at next week's sale.

"We think the higher prices will continue, as the market is in a strong position at the moment," Mr Harris said.