Australia's rarest and arguably toughest fish has successfully been translocated into the wild in a major milestone in its fight against extinction.

The fish is one of the planet's 100 most endangered species, a title that non-for-profit conservation group, Bush Heritage Australia, is getting rid of.

Since translocation efforts began in 2008, the fish has tripled its population from around 1000 to 3000 estimated in the wild. 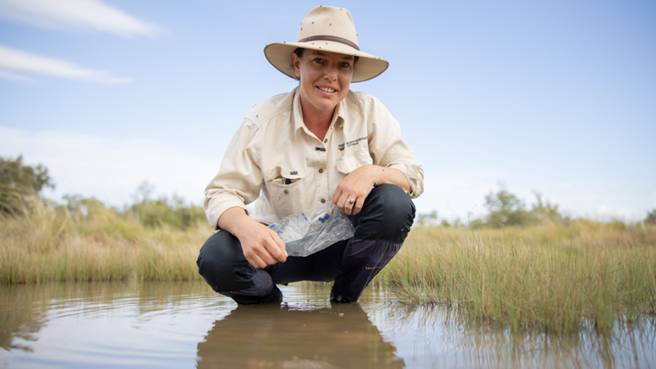 It is the first time captive bred Red-finned Blue-eyes have been released into one of Edgbaston's natural springs which are fed by water travelling up from the Great Artesian Basin.

Dr Kern said it was heartening to see conservation efforts paying off for the unique and irreplaceable native species.

"The Red-finned Blue-eye may be Australia's tiniest freshwater fish but it is a hardy species, surviving in the arid zone in pretty extreme aquatic conditions. I'm confident that the new wild population will be able to thrive long into the future," said Dr Kern.

A Queensland Department of Environment and Science spokesperson said Bush Heritage received $49,000 in a Community Sustainability Action grant to restore and protect habitat at EdgbastonReserve for the Red-finned Blue-eye.

"Bush Heritage have been doing a fantastic job to protect this endangered species which is only found in artesian springs on Edgbaston Reserve," the department said.

"The release of animals from the captive breeding program will further help secure this endangered species in additional springs on Edgbaston Reserve."

Since purchasing the 8000-hectare Edgbaston Reserve in 2008, Bush Heritage has been working to eradicate springs of feral Gambusia (Mosquito fish), an introduced and invasive species that out compete Red-finned Blue-eye and may prey on their eggs.

Springs have been fenced with protective barriers to prevent Gambusia from re-entering during times of flooding.