GETTING A GRIP: NSW farmer Mick Borg equipped his header with tracks as a precaution against predictions of a wet grain harvest last year.

GETTING bogged up to 50 times during a wet harvest previously and forecasts of wet conditions again last season prompted NSW grower Mick Borg to switch over to tracks on his Case IH harvester.

As it turned out it ended up being a dry harvest but Mr Borg knows he can now get out of trouble if he does experience wet conditions and he can also use the same tracks when he decides to upgrade his header.

Mr Borg and his wife Mariela operate a cropping enterprise including wheat, lupins and canola at their Chaney Ponds farm between Dubbo and Narromine in the state's Central West region.

Historically, the area has received an average 550 millimetres of annual rainfall.

Recent years have tested that theory with only 200mm in 2019 but last year the property recorded around 900mm.

The rain helped achieve excellent average crop yields of 5.1 tonnes per hectare for wheat, 3.2t for lupins and 2.7t for canola.

Mr Borg said when he was bogged up to 50 times on the red loam soils during a previous harvest he could also call on his father to pull him out but he had since passed away.

He first thought about switching to tracks on his harvester during 2019 and inquired about the use of ATI High Idler tracks with McIntosh and Son at Dalby in Queensland.

The 2019 season turned out to be a difficult one but when wet conditions were being predicted again last year, the tracks came back on the radar.

"They were saying it was going to be a wet harvest and I thought we could get into trouble,'' Mr Borg said.

"Sometimes you can be driving along and then just bang - you're bogged.

"You can lose a number of days or a week and that's not counting possible damage to machines.''

During a trip to the Gold Coast to visit family he dropped in on the McIntosh and Son team at Dalby to view the ATI tracks.

"When I saw them, I thought my God, they are so big and strong,'' Mr Borg said.

"They are quite high value but you get a lot for your money and the McIntosh team and dealer principal Cameron Jordan were really good to deal with - they helped a lot.''

The ATI High Idler tracks can be fitted to most four-wheel-drive tractors and harvesters. 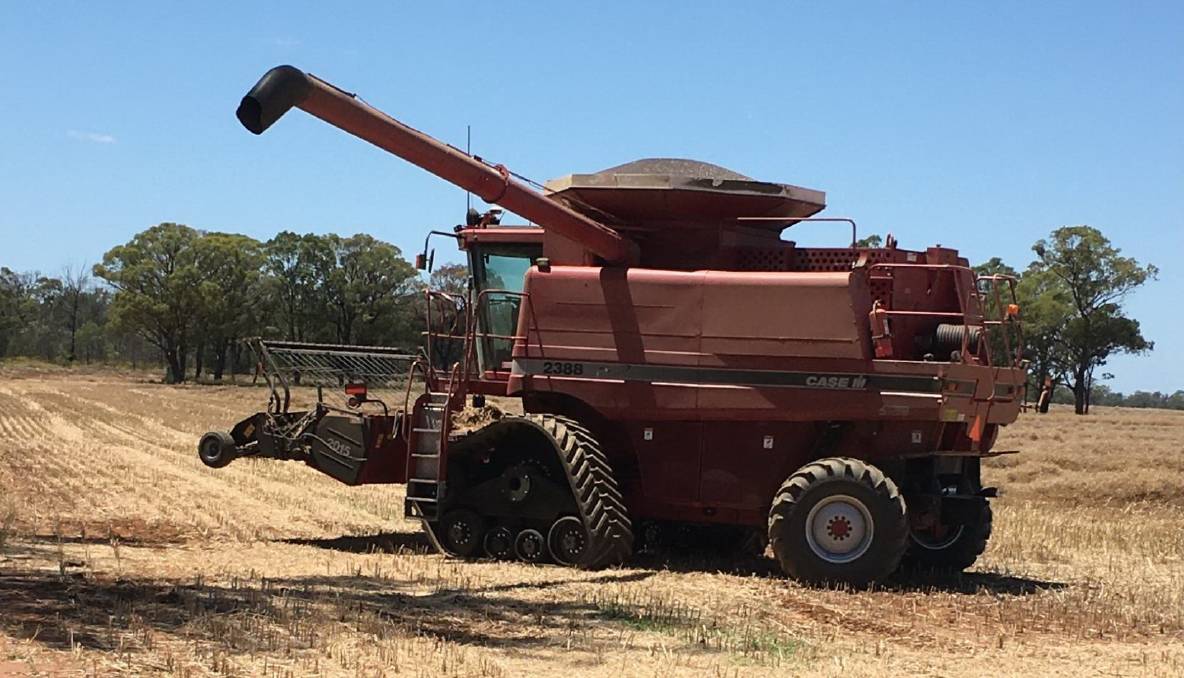 The ATI tracks "at work'' on the Borg family's Case IH 2388 header during the recent bumper grain harvest.

Mr Borg said reduced compaction was the other major attractive feature with the tracks, especially for his tramline farming system.

"The header set-up is not quite on the tramline but all the sowing, spreading and spraying is,'' he said.

"We also only had single tyres on the header which would have been causing more compaction.''

Mr Borg runs a 2004-vintage Case IH 2388 harvester and he plans to transfer the tracks to the next machine he upgrades to.

"That was the key selling point, knowing that we could move them on to the next header.''

He said the 2004 model Case had only clocked-up 1300 rotor hours and it had a four-wheel-drive kit in addition to the tracks which were easy to fit and required no header modifications.

"I had them on in one day with the help of a mechanic and because we didn't have duals we had to do axle extensions to get the tracks away from the elevators of the header.''

He said harvest travel speed was only slightly slower and there had been no wear on the belts after 185 hours.

"We had some hot daytime temperatures but the idlers and all bearings were all cool, so it's very strong. It's almost over-engineered.

"An all-sealed system also meant there was no maintenance. There's not one grease nipple with them,'' Mr Borg said.

Mr Jordan from McIntosh and Son said the option to quickly fit tracks to harvesters when conditions required would also appeal to the likes of Riverina rice growers.

"Rice programs are not consistent but when growers choose to grow it, they're more than likely going to be taking it off in the mud,'' he said.

"With the ATI modules, you can have tracks in the shed and if you're coming to a wet harvest, you can put them on and away you go.''

He said similar to NSW, growers in Queensland would not need tracks every harvest but the ability to fit them when needed was a great option.

"One wet year on the Darling Downs, crops were excellent but growers couldn't get to them.

"One grower I knew had tracks and his comment was that they paid for themselves in that one year alone,'' Mr Jordan said.

The story Making tracks to stop Borgs from getting bogged first appeared on Farm Online.