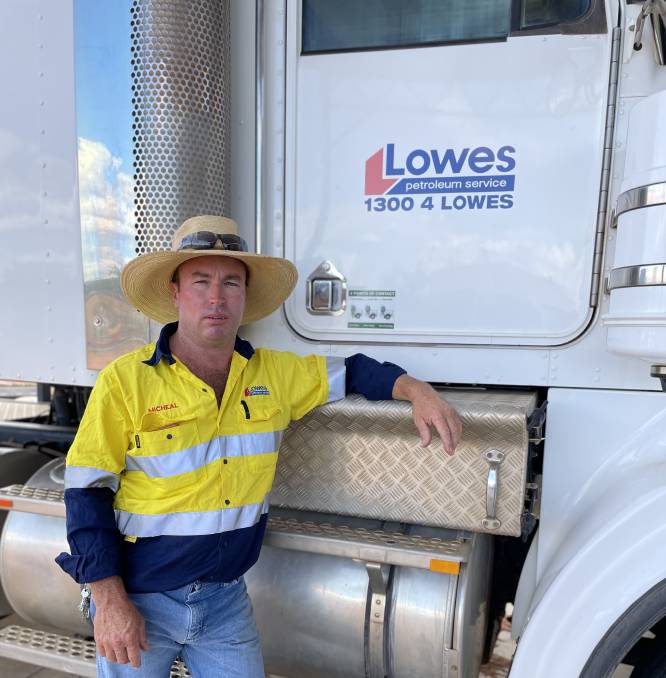 When truck driver Michael Thompson made a decision to reverse the way he drove into a Simpson Desert property to deliver fuel, little did he realise it would be the difference between life or death for Sydney grandfather Terry Stewart.

A driver for Lowes Petroleum, Mr Thompson was delivering diesel to Cordillo Downs Station south east of Birdsville in December when rain in the east made him switch his route to the west and in doing so, led him to find Mr Stewart near death and barely breathing.

The 75-year-old Sydney man had broken down in one of the harshest regions of Queensland. After spending the night in his car, he left a note saying he intended to walk the 30 kilometres to Cordillo.

"I followed his tracks for 13km or so," Mr Thompson said.

"I knew he was in a bad way because the last 200 to 300 metres his tracks started going backward and forward, so he was clearly disorientated. There were probably four to five sets of tracks. I kept doubling back and found him unconscious in a dry gully.

"The temperature that day was 47, 48 degrees Celsius; it was so hot I couldn't touch the door handles to the truck.

"To be honest I thought he was dead when I found him, he was red raw. It looked like he wasn't breathing it was so shallow.

"I ran to the truck and got some cold water and poured it on his clothes and he groaned, so I knew he was alive."

Janet Brook from the station came quickly with help. It took three of them to carefully lift the 75-year-old into their four-wheel drive.

By 7pm they were treating Mr Stewart in an air-conditioned room with Ms Brook covering him with wet towels, following instructions from the RFDS.

"If I hadn't gone in that way instead of out, he would never have been found; there was no-one else on the road that day. He would have been dead alright," Mr Thompson said.

Mr Stewart, who is the track boss for the Great Escape Oz, a charity car rally for Cure 4 Cystic Fibrosis, was mapping out a route for a charity rally when his car broke down.

"His four-wheel-drive was in reasonable condition and he had some food and water and both his wife in Sydney and staff at the Birdsville Caravan Park knew of his travel plans," she said.

A seasoned driver based in Quilpie, Mr Thompson has worked for Lowes Petroleum for more than 13 years driving a triple road train and covering over 100,000km a year.

Mr Stewart is still being treated for burns and is planning only one trip in the future - a catch-up with his rescuer when he is fit for travel.