Ideal type: Smooth coated medium frame females typical of the breeders the Flanagans are producing with their Charnelle Charolais cows.

The relative ease of sourcing and purchasing Charolais homozygous polled genetics without compromising on other traits has been the primary motivating factor behind Shaun Flanagan's decision to focus on the breed.

The relative ease of sourcing and purchasing Charolais homozygous polled genetics without compromising on other traits has been the primary motivating factor behind Shaun Flanagan's decision to focus on the breed in his operations situated across North Queensland.

With his partner, Trish Corfield, and their daughter Tess, who was welcomed into the world eight weeks ago, they own a small coastal property at Mena Creek located near Innisfail where they run a commercial breeding herd.

The primary focus of their operation involves joining Charolais cows to a homozygous polled Charolais bull and to then join the resulting progeny to a Brahman bull.

"Alternatively we join Brahman heifers purchased from either Elrose Brahman stud or from the Big Country Brahman Sale to a homozygous polled Charolais bull," he said.

"Ultimately, we're wanting to produce a line of polled Charbray females to base our commercial operation on. The progeny from these females are backgrounded in the tropics.

Mr Flanagan said he bought his first Charolais bull in 2004 but only got serious about producing females for their own use from 2018 onwards.

"We believe for better or worse the beef industry is heading towards a polled focus for animal welfare reasons, and the Charolais is the easiest way for us to meet this growing demand without losing out on other desired traits.

"We do still need tropical content in our commercial cows and their progeny so that they can handle our environment, which is why the cross with the Brahman is made." 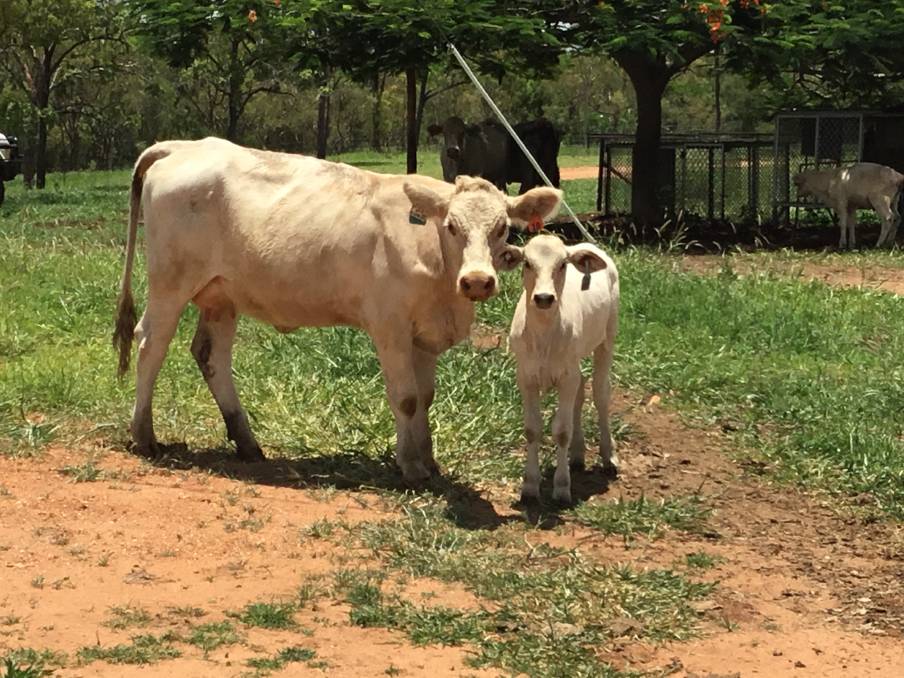 A heifer the Flanagans purchased from Charnelle Charolais Invitation Female and Genetics Sale in 2019, now has her first calf on the ground, at 27 months, by Elrose All-rounder.

He said their higher end/stud-type cows are joined from January though June, while their commercial cows are joined year-round as "the timing isn't imperative on the coast".

"We cull on temperament and quality in the stud cows and some of these make their way into the commercial cows. We also cull on fertility to ensure the non-performers exit our system, we don't poddy or pull calves and if we do both the mother and progeny are culled.

"Heifers are sold to a local butcher for fattening, then into the feedlots at 18 to 24 months at the required weights when they're starting to break two-teeth.

"Our steers make their way down to Tully, where they're sold at 24 to 30 months, and typically targeted as a light Vietnam export bullock."

"While we usually have plenty of dry Januarys and only start receiving decent falls in February/March, this year has proven to be an exception, with good falls received across all our blocks."

While their animal health (backline and flytags) bill through the year is high on the coastal country, Mr Flanagan said that cost is offset by the minimal nutritional supplements required.

"Our leased Charter Towers land is standard goldfield country where we feed a mix supplied by Coleman Stockfeeds that is stronger than standard dry/wet season lick but not quite a production mix."

"In all we've bought 18 females from Charnelle sale, as well as some progeny.

He said when they started out with the breed they only had a minimal idea as to what they were looking to purchase.

"Initially we concentrated on three in one packages (cow, calf and in-calf), and now that we've built up our base herd we're now only targeting a select few of the better quality polled (preferably homozygous polled polled) females.

"We don't want the very large framed, raw-boned cows that are produced in the south east as at the end of the year we lack the quality in our feed to keep them going forward, so we're targeting a smooth coated medium to medium/large framed animal with a softness to lay down fat in the north."

"The Charnelle females fit this description perfectly. We can't believe how well they're performing for us in North Queensland.

"They handle the conditions up here so well that we went ahead and purchased our next stud sire from the Blanch's at their annual Coolabunia Classic Bull Sale in August last year."