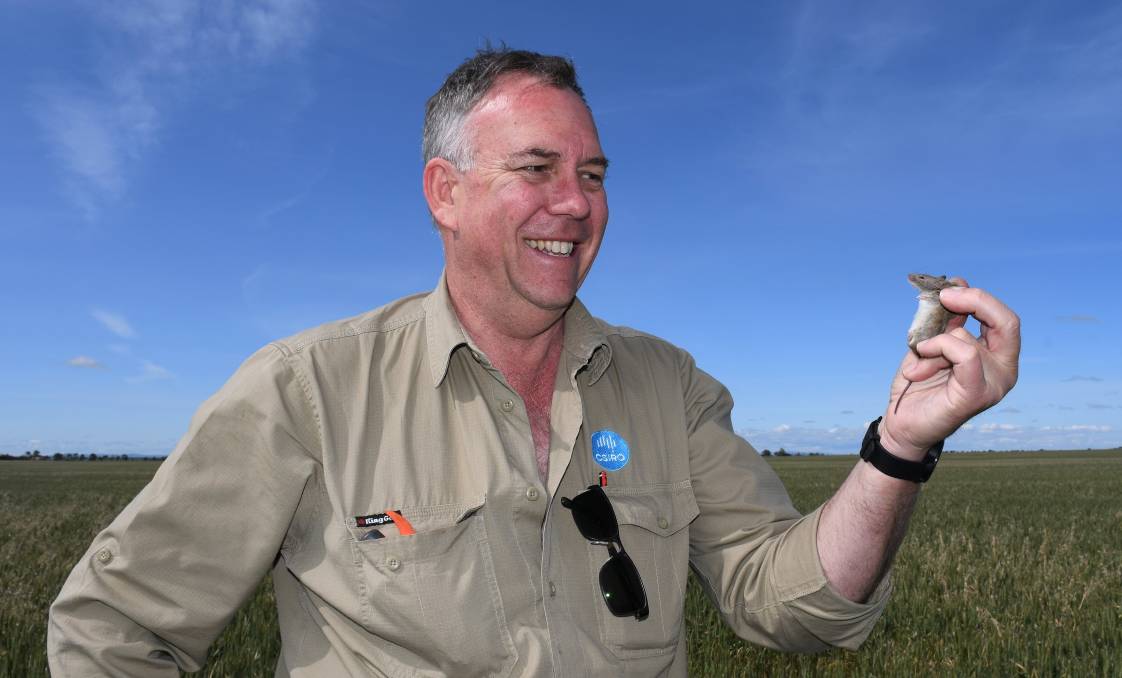 GET OUT AND ABOUT: Steve Henry, CSIRO mouse researcher, urges growers to go through their paddocks to check if mouse numbers are rising.

Mouse numbers are rising to alarming levels in a number of regions down the eastern seaboard and farmers are urged to reduce their feed.

AUTHORITIES are warning of a two-pronged threat to crops from a surging mouse population on the east coast.

Mice have been observed in worrying numbers in areas from the Darling Downs in Queensland right down to the Wimmera in Victoria, breeding up due to an abundance of food after the big year of grain production.

Some of the worst cases are being observed in NSW's Central West, where there have been reports of summer sorghum crops being abandoned due to extensive damage.

CSIRO mouse researcher Steve Henry said it was a complicated situation with the potential to impact not only summer crop, but germinating winter crop in the autumn if mouse numbers were not controlled.

He said farmers needed to get a handle on mouse numbers on their own property as populations varied wildly.

"There is talk of mouse plagues and terms like that and certainly there are some examples where that is applicable but overall that does not quite fit the bill in terms of a uniform event of damaging numbers of mice everywhere down the eastern seaboard," Mr Henry said.

"What we are seeing is really localised levels of high numbers of mice, not even at a district by district level but a paddock by paddock level," he said.

"The take-home message is that you need to get out and about and have a look in your paddocks, there are so many variables that influence numbers such as crop type, availability of feed and seasonal conditions, don't just assume because you haven't seen any that there is no problem."

While the rise in mouse numbers is linked to good winter crop production, mice have also bred up in areas where the season was not so kind.

"People have been surprised at the high numbers on Darling Downs, where the winter season was not so good, but there was a very good start to the season which allowed numbers to start to build up," Mr Henry said.

In Victoria, reports of high numbers of mice are steadily building.

There was a big harvest, combined with high winds in December that meant significant amounts of grain, in particular barley, were knocked out onto the ground.

Some growers estimate as much as 3 tonne to the hectare is now on the ground, providing ample food for mice.

Agriculture Victoria's Heather Drendel said there had been reports from Wimmera and southern Mallee growers of mouse activity in crops during harvest.

"It is important for farmers to keep an eye on numbers, if they are present then reduce the feed load and then finally they may need to consider baiting," Ms Drendel said.

Mr Henry said authorities were keeping a close eye on events over the next month, which will be critical in terms of the impact of the rodents on autumn sown crops.

"Mice can breed up quickly, they breed from six weeks of age and can have a new litter every 19 days so numbers can build quickly if conditions are favourable."

Hopetoun, Victoria farmer Lucas Puckle is closely watching numbers at present after a big year, including lodged crops that left grain on the ground.

"We had to harvest a crop of barley that had fallen over, with the header front almost on the ground. In the morning I noticed 50 to 60 dead mice in the sieves," Mr Puckle said.

"We're trying to 'sheep' our paddocks to get rid of the feed and I am thinking they won't breed up too much if there's not too much feed on the ground," he said.

In Queensland, AgForce Grains president Brendan Taylor urged farmers to be vigilant, saying he believed many were unaware of the threat given the season had not been as big as further south.

He said the topic of rising mice numbers was first raised in December when growers were encouraged to inspect their paddocks.

"It seems few growers took notice because mice populations are continuing to multiply, and at a time when many are just getting back on their feet after drought," Mr Taylor said.

"We now need real, strong, immediate action before this situation gets out of hand."

Through NSW, mouse numbers are high enough for them to be easily observed on the roads at night.

Farmers and industry members around Dubbo and Gilgandra in particular are concerned about the high numbers.

Mr Henry said along with the abandoned crops others have altered their programs to allow them to get the mouse problem under control before planting more crop.