The fibreglass elephant is a permanent link to Blackall's early heritage.

Western Queensland is not where you would expect to find a monument to a circus but that's what is proudly being unveiled in Blackall this Australia Day.

Western Queensland is not where you would expect to find a monument to a circus but that's what is proudly being unveiled in Blackall this Australia Day.

In keeping with the penchant that Aussies have for big things, the donor of the one-tonne fibreglass elephant that now stands in the town's Banks Park hopes it will be a permanent reminder that it was in Blackall that one of the country's largest circuses, Perry Bros, experienced its successful rebirth.

The donor is Bob Perry, a descendant of the circus troupe that juggled its way into the district in the 1860s.

They were talked into giving up the lifestyle by good friends who owned Northampton Downs Station midway between Tambo and Blackall, who built a hotel for them to live and work at.

By 1889 Mr WG Perry was yearning for the life of sawdust and spangles again, according to the Rockhampton Morning Bulletin.

It reported that together with a large family and 70 head of good horses, he opened at Tambo after six months training, doing big business in the process.

The show then proceeded to Blackall and Aramac, taking everyone's loose change in a triumphal return that grew to become one of Australia's largest circuses by the 1930s, when as many as 120 people were involved in the spectacle.

Among the achievements it chalked up during its existence were being the oldest travelling circus never off the road, even during World War II, and being the first circus to circumnavigate Australia.

Perry Bros were particularly well known for their high-jumping horses, including Lookout, who broke the then-world record by jumping 2.47m at the 1936 Cairns Show. 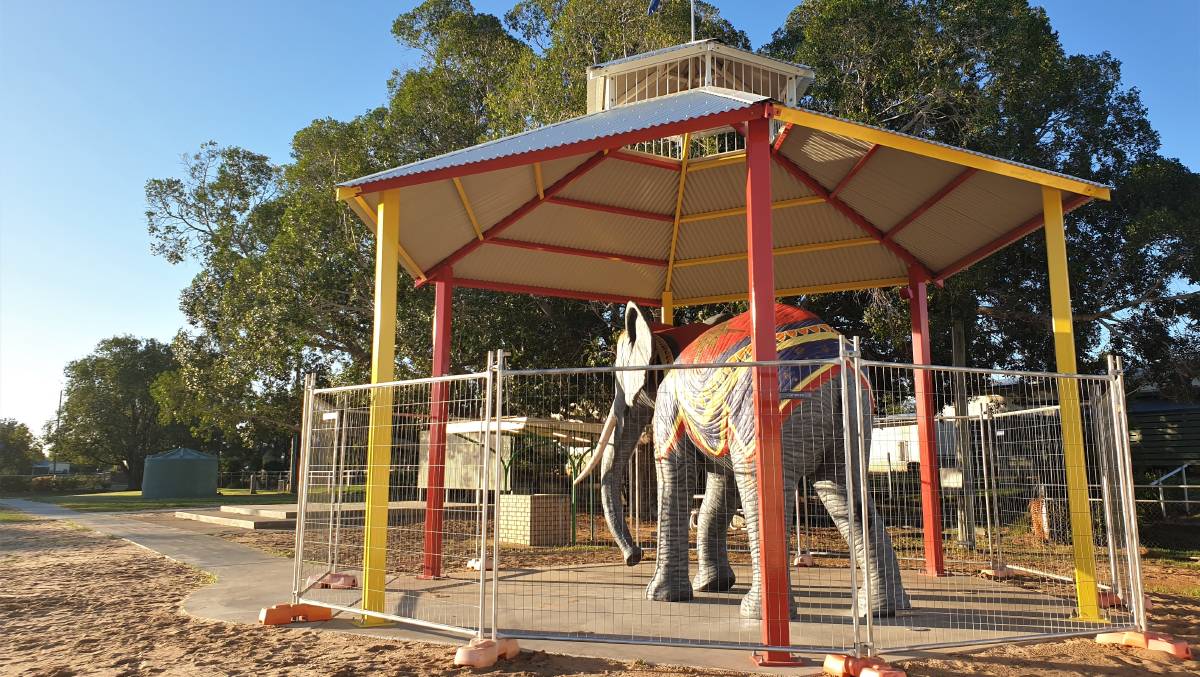 The fibreglass elephant has been installed in Banks Park beneath a purpose-built rotunda.

The circus purchased its first elephant in the 1920s and had as many as nine at one stage, and became the last circus in Australia to tour with its iconic elephants.

As well as performing, the strong animals would do most of the heavy work in unloading and erecting the circus tents when they arrived at a new venue.

One of those enchanted with the spectacle in the early days was 12-year-old Blackall girl Mary Ellen Atkinson who 'ran away and joined the circus' in its most classic sense.

She not only became a star trapeze artist but she married James Perry and brought up a family of seven while touring through Australia and New Zealand.

She took over the running of the circus, one of the country's biggest, in the 1930s.

Bob Perry said in Blackall this week that he wanted to have something representing the family in the town, which is why he outlaid a considerable amount of money on the fibreglass elephant.

His ancestors intermarried with other Australian circus families, Sole Brothers and Eroni Brothers, which can all claim their origins in the western Queensland town.

One of Bob Perry's relations had the replica elephant created to advertise his amusement shows in Geelong, and Mr Perry purchased it from him for $5000.

It cost him another $5000 to transport it on the back of a truck from Victoria to western Queensland, turning a few heads in the process.

"The driver reckoned it was lucky there were not a few accidents bringing it up," Mr Perry said.

As well as startling road users, the elephant delighted people in overnight stops at Armatree, NSW, and Surat in southern Queensland.

Locals there and at Mitchell asked him to detour past their local schools and aged care centres, much to the delight of all at the windows.

Perry Bros Circus sold to Stardust Circus in 1993 but through Mr Perry's generosity, its legend now lives on at Blackall, under a rotunda that resembles a Big Top.

Mr Perry said it had been an honour to bring about a lasting reminder to the circus in his grandmother's home town.