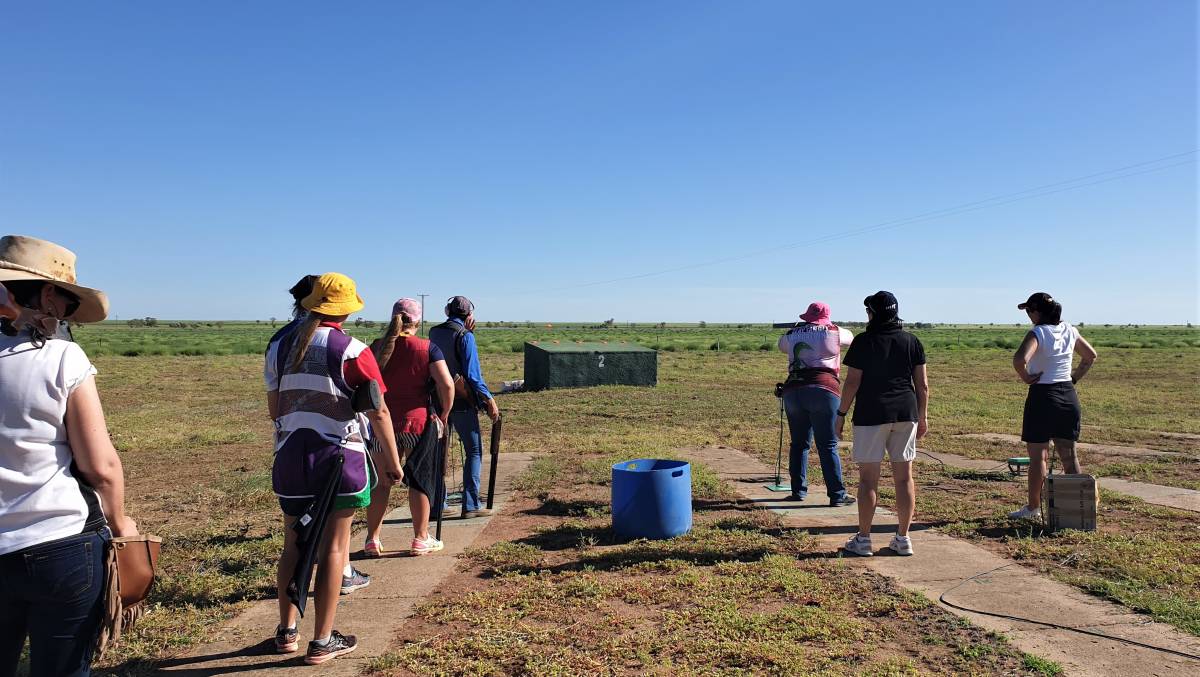 Female and junior shooters go through their paces at Ilfracombe with Queensland Clay Target Association coaching director Debbie Young and fellow coach Rae Saheli, who travelled up from the Gold Coast.

A full board of 28 people attended a weekend program hosted by the Ilfracombe Clay Target Club aimed at helping female and junior shooters in western Queensland realise their potential.

A full board of 28 people attended a weekend program hosted by the Ilfracombe Clay Target Club aimed at helping female and junior shooters in western Queensland realise their potential.

According to Queensland's coaching director Debbie Young, who conducted the course, those attending were much more advanced than she expected but also at a higher level than the women themselves appreciated.

"The main thing, especially with the juniors, is they're absolutely keen.

"We didn't come across one person that didn't have the potential to go further."

Related reading: Tambo shoot one for the record books

Ms Young, who has been a club coach for 22 years, said they were finding throughout the state that women generally thought of themselves as a secondary family member when it came to competitive shooting.

"They're always working in the shoot office or the kitchen and having a shot once that's done," she said. "We say to them, you're not a second-class citizen so try not to make shooting a secondary thing." Debbie Young oversees some of the juniors lining up for coaching tips.

After range exercises aimed at passing on practical tips such as cheek placement and firing faster, the participants left the flies behind for some theory in the shade of the Wellshot Hotel.

Ms Young said for most female shooters, it had been a man who had first put a gun in their hands, which was set up to suit their physiology, and all their well-meaning coaching tips came from a male perspective.

As well as being physically different, women's multi-tasking tendencies could work against them when competing.

"According to new thinking, too much thinking of any kind detracts from what your body knows to do," Ms Young said.

"You get to a stage where you physically can't get any better and it's all in your head.

"Women deal with a lot of internal dialogue but with the 'quiet mind' technique, you can turn it off.

"They are finding that no dialogue is better than affirmation."

"I would also pick people I respect to ask questions of."

Such was the success of the weekend that Ilfracombe has booked Ms Young up for a similar program in a year's time.

"We've already seen big improvements in just a couple of days and we're now going to be monitoring where everyone's up to," she said.

In conjunction with the coaching a central zone initiative run by Blackall, Barcaldine and Ilfracombe clubs was finalised with the last of three 100 target handicap shoots conducted. Gemfields A grade shooter Tom Mylrea not only won the weekend event but claimed the overall prize for the three shoots combined to be named the 'outback champion of the world'.

He was up against 82 other shooters from 12 clubs taking part in December and January, including Springsure's Bella Woolcock, in B grade, who took overall second place, and Tambo A grade veteran shooter Tom Jarvis who finished third.

He and fellow Tambo club members Peter, Lil and Jack Brandt, Clint Abel and Richard Holmes helped bring the club handicap trophy to Tambo with 671 points, a clear win over Ilfracombe on 624 points.

Gemfields was in third place on 622 points, Barcaldine in third with 555 points, and Springsure fifth on 511 points.