Leucaena is where it's at for the Rolfe family at Springsure in central Queensland as they continue to explore options for boosting productivity via pasture.

Leucaena is where it's at for the Rolfe family at Springsure in central Queensland as they continue to explore options for boosting productivity via pasture.

When Ross Rolfe's father purchased Birrong, a 2140ha block from the British Foods Corporation-owned Orion Downs, in 1966, some level of cultivation was kept up until 2000.

The refinancing costs involved in minimum till machinery saw that scrapped in favour of a return to pastures, which Ross Rolfe said the lighter country was more conducive to anyway.

Butterfly pea proved a winner until the wet seasons of 2010-11, when native blue grasses took over from the less competitive legume.

An experiment with desmanthus a couple of years ago didn't work to the extent they wanted or expected, due mainly to the lack of rain.

Although it's beginning to spread now, they have planted 1215ha to leucaena and have another 200ha of strips prepared to plant this year.

On top of that, Ross and Christine's son Drew undertakes contract planting for producers in the wider region, which takes up four months of most years.

He said it began when they'd ploughed a paddock close to the highway, prompting another producer to ask if they were in the business of planting.

"We sort of fell into a contract planting job," Drew explained,saying he was looking at having somewhere between 1000ha and 1500ha to plant this season.

"That'll vary depending on what rain's happened and what producers decide they want to do," he said.

"We try not to travel too far because we want to focus on making sure we do the right job for our clients rather than a job for a lot of clients.

"It's very much about timing when you plant and doing it when the moisture's there, making sure the prep work is done.

"I think that will be the challenge this year - if the season does keep coming, which I hope it does, it'll be making sure that we can get the work done in the window."

Another unknown factor at this stage is the impact of reef regulations when they come into play in the second half of the year. 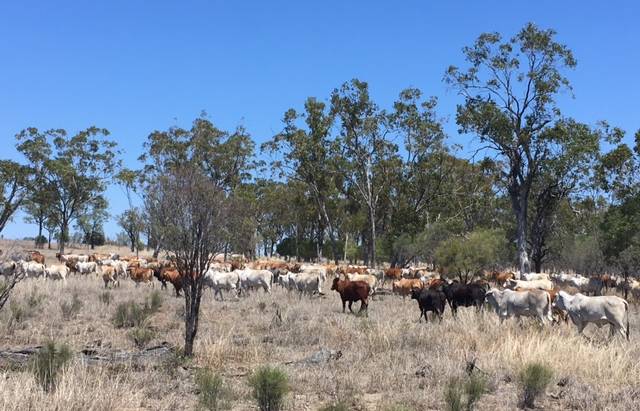 Cattle at Derrilloo, south of Springsure, prior to the recent rain in the district.

Breeding, backgrounding, trading - whatever direction Ross and Christine Rolfe, plus son Drew and wife Amy, decide to take with their cattle operations at Springsure, pasture condition is at the forefront of their minds.

Although the severity of the 2002-03 drought saw both 2140ha Birrong and 1000ha Derrilloo, south of Springsure, almost completely destocked, they used the opportunity to divide Birrong into cells for rotational grazing.

Each of the 60 cells is around 25ha in size and equipped with the ability to medicate with urea via the water system, for pasture utilisation in winter and dry times.

Once they had relief rain in 2004 and they were able to restart production, they decided to move from breeding to buying and selling.

"I like the backgrounding operation because you could be more flexible in your stocking rates so you could manage better for the seasons."

Having said that, Drew and Amy have Simmental bulls in with Brahman cows with the intention of continuing some breeding at Derrilloo.

While buying anything they think might be profitable, the Rolfes have concentrated on flatback cattle because their best market to date has been Brindley Park and the Coles market.

"We've sold probably three or four decks of backgrounders elsewhere and that was mainly because we had Brahman content and had to put them somewhere else," Mr Rolfe said.

The plan was working well until mid-2020 when the buy-in prices were virtually higher than the selling prices.

"The prices are good because every kilo that you put on you're getting more for it but, you've got a lot more capital out," Drew Rolfe said.

"Normally August-September is your better buying so we were waiting to see what happened there, and that's when prices started to take off."

Feeling nervous about facing a predicted wet season with greatly reduced numbers, they made the decision to purchase station mated heifers, some Brahman, some European, with the intention of trading.

"We preg tested and we've got our bulls out now for our normal joining window and we'll see what the market does, if they're sold as PTIC or cows and calves, or trade to breed properly," Drew said.

"We felt this gave us more options."

The rain in the first week of January - 124mm at Birrong and 105mm at Derrilloo - has gone some way towards reassuring them that they made the right decision.