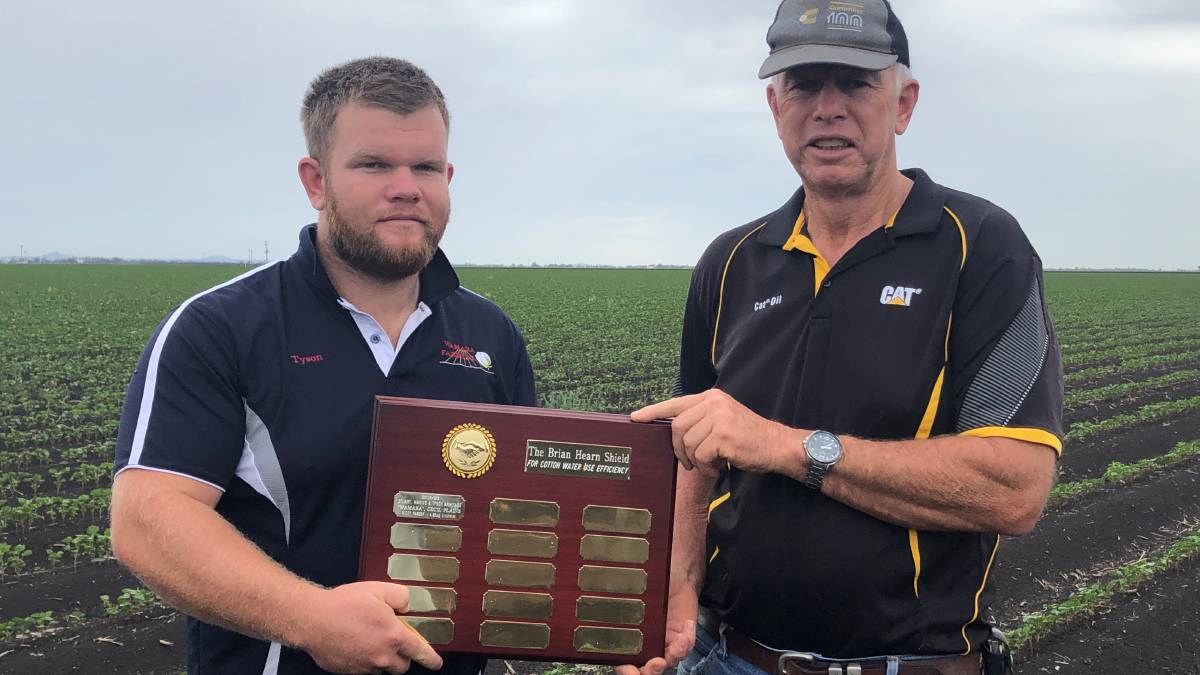 The inaugural Brian Hearn Shield for Water Use Efficiency has been won by Stuart, Maxine and Tyson Armitage.

Cotton Seed Distributors has announced the winner of the inaugural Brian Hearn Shield for water use efficiency as Stuart, Maxine and Tyson Armitage from Cecil Plains.

The award honours the legacy of leading cotton researcher, Brian Hearn, who was instrumental in the development of a number of cotton crop simulation models, which have been widely adopted by the Australian cotton industry.

Despite this season's harsh conditions the Armitage family recorded one of the highest yields they've ever produced.

The award winners concentrated on drought proofing their farm, purchasing a large amount of water to avoid falling into a "boom-bust economy" and remain self-sufficient. They credited their results to careful management of all inputs, not just irrigation.

A balanced nutrient and water budget enabled the family to achieve a water use efficiency figure of 4.95 kilograms of lint per millimetre.

Stuart Armitage, a former Queensland Farmers' Federation president, said it was good to have their farm's water strategy officially recognised in the cotton industry.

"Water efficiency is extremely important in this day and age, with situations like the Murray-Darling how they are," he said.

"If we in the cotton industry can prove that we're just getting better at water efficiency, it just means that we're valuing water a lot more than we would twenty years ago.

"This is a fairly special part of the world where we can extract high yields with little water."

Mr Armitage said there were a lot of things to look forward to inside the cotton industry as innovative strategies begin to get recognition and a new generation of young farmers begin to takeover.

"We've got young people coming back to the farms looking at innovation, they're looking at changing the way we always did things," he said.

"That's what is bringing young people back onto the land, it's innovation.

"Young people want to lift up the game, by a notch or two, or ten if they can."

CSD's marketing and extension lead James Quinn said the new award was a small way of honouring one of Australia's pioneer cotton researchers.

Born in England, Brian Hearn's career began as an agronomist in Malawi and he later worked in Yemen and Uganda, researching cotton crop physiology. He came to Australia in 1970 as a cotton research agronomist with the CSIRO in the Ord Irrigation Area, and later Narrabri, where his modelling research led to the development of a number of software programs, including OZCOT and hydroLOGIC.

"The Brian Hearn Shield for water use efficiency complements the series of accolades that CSD awards to high achieving growers in our variety trial and Ambassador Network programs. CSD's five-year strategic plan has a focus on increasing water use efficiency in line with overall industry targets and we're proud to pay tribute to the work of Brian Hearn through this award.

"Such a figure is very well deserving of the inaugural Brian Hearn Shield, and we congratulate the Armitage family for winning this award."