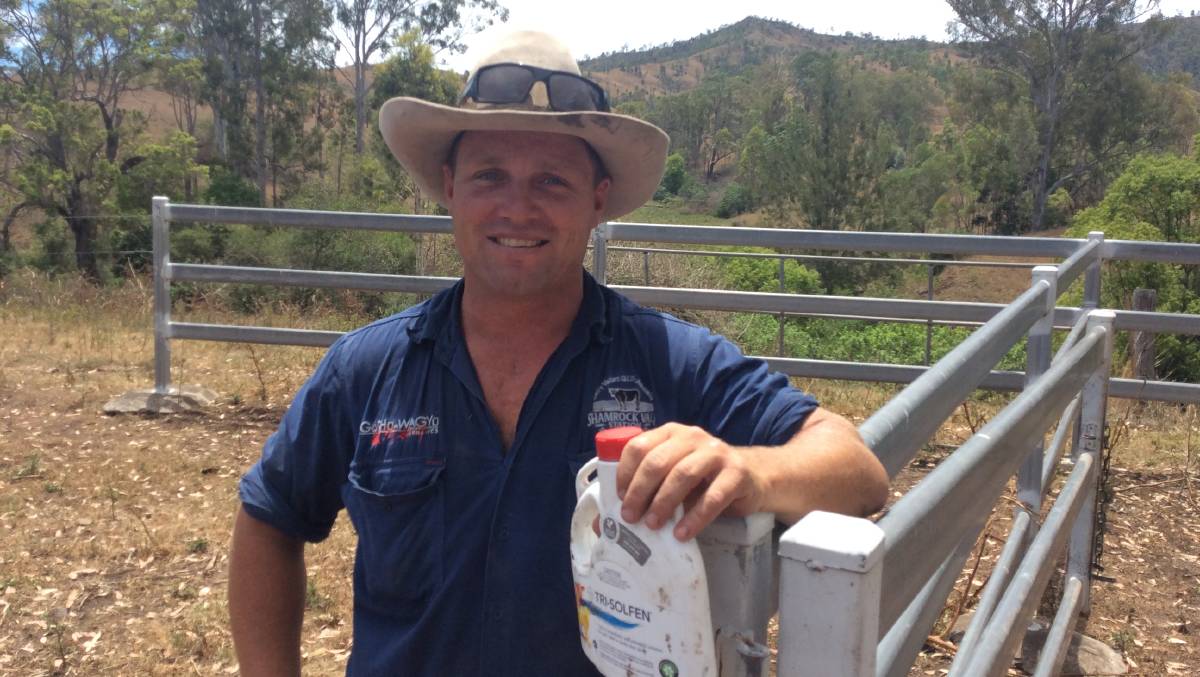 Instant and longer-acting pain relief is playing an important role in caring for Wagyu calves on Shamrock Vale Station at Kerry.

Instant and longer-acting pain relief is playing an important role in caring for Wagyu calves on Shamrock Vale Station at Kerry.

"We want to have everything happy and healthy. When people drive past we want them to see the Goshu Wagyus in their prime."

Mr Goulding said he had first seen Tri-Solfen demonstrated at Beef Week in Rockhampton, as well as being used on other cattle.

"As Wagyu is a horned breed, we were interested in it, so we purchased some to give it a try," he said.

"With the pain, dehorning doesn't seem to worry their heads so much and it stops the bleeding fairly well.

"We find Tri-Solfen does give 24 hour pain relief. Not that we'd had too, but we would give a second dose if we thought it was needed."

Mr Goulding said it was notable that by providing pain relief the Wagyu calves did not suffer a setback.

"With Tri-Solfen they seem to relax a lot quicker and go back on their mums and drink.

"We find that because the calves are staying on their mums we are not seeing any weight loss. The calves seem a lot happier, so while they're happy, we'll keep using it."

Shamrock Vale has a herd of about 300 fullblood Wagyu breeders plus other commercial cattle.

Shamrock Vale's highly regarded Goshu herd is based on Tajima genetics, arguably the most famous of all the Wagyu bloodlines originating in Japan. In fact, in 2016 beef from a beast sired by a Goshu bull was named the 'World's Best Steak'.

Shamrock Vale Station is located on the Albert River, covering 1820 hectares in the picturesque Kerry Valley south of Beaudesert.

THE grass fed beef industry's commitment to animal welfare has been further enhanced with the release of a guide to pain relief for necessary animal husbandry practices.

Issued by the Cattle Council of Australia, the guide follows the recent improvement in access to registered pain relief compounds.

"Each compound has a different purpose, so it is important to match the planned procedure with the most relevant compound or combination of compounds," the guide reads.

"If in doubt, veterinarians are best placed to advise."

The guide deals with local anaesthetics, such as the 24-hour-effective, off-the-shelf gel Tri-Solfen and vet-prescribed lignocaine.

Reference is also made to longer-acting, S5 vet-prescribed, non-steroidal anti-inflammatories, including meloxicam Buccalgesic and Metacam, as well as flunixin, ketoprofen, and tolfenamic acid products.

The guide says that animal welfare standards for cattle are progressively regulated by state and territory governments. "When regulated, the use of pain relief will be compulsory for castration and dehorning of animals above certain ages," the guide says. "Producers are encouraged to consider pain relief for aversive procedures on all their cattle."

Tri-Solfen contains two local anaesthetics, lignocane and bupivivaine, plus adrenalin to stop bleeding and an antiseptic to prevent infection.