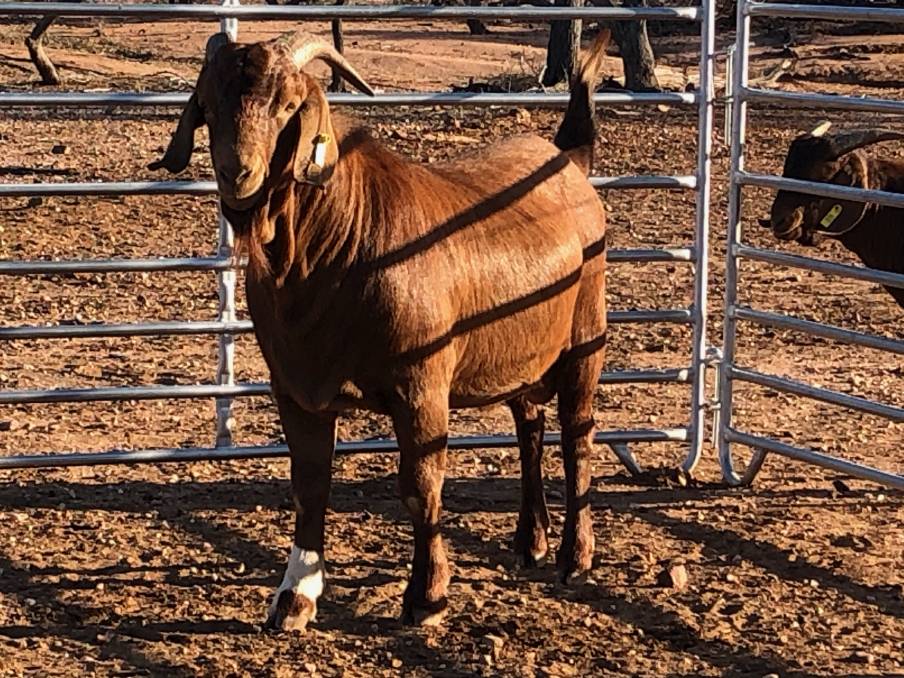 The full-blood Kalahari Red sire offered by Seaford Red Goats at Blackall that sold for $11,070 on Tuesday.

A Blackall stud goat breeding enterprise offering its progeny for the first time set a new Australian record on Tuesday when its full-blood Kalahari Red buck was sold for $11,070 on AuctionsPlus.

A Blackall stud goat breeding enterprise offering its progeny for the first time set a new Australian record on Tuesday when its full-blood Kalahari Red buck was sold for $11,070 on AuctionsPlus.

The pair bought 300 rangeland weaners from Coolagh Station in 2016 as their foundation herd.

They have since purchased sires from Barcoo Boer Goats based at Blackall with the aim of improving their line for similar buyers wanting to grow their herds.

"We have been improving our line for some time and the Kalahari Red seemed like the obvious choice to continue our breeding plan," Ms Curley said.

The price eclipses the $9000 record set the previous week at the first annual Cobar Red and Black Goat Sale when a red buck from the Rangeland Red stud at Goodooga, NSW was sold for $9000.

"This has blown our expectations right out of the water," she said. "Kalahari Reds are obviously flavour of the month, and a lot of good marketing has helped."

The 18-month-old sire, weighing 77kg liveweight and given a fat score of 2, is the product of pure South African goats Ms Dennis and husband Joe Taylor purchased from Mundubbera Kalahari Red breeder Cartref Goat Industries three years ago, at a dispersal sale.

According to Ms Dennis, Cartref's Glenda Rogers was one of the first to introduce South African Kalahari Red genetics into Australia, meaning the record-breaking young sire had a pedigree not found elsewhere in Australia.

Seaford Red Goats sold a total of 10 sires on Tuesday for an average $3692.

The other nine bucks were based on Kalahari Red/Aussie Red (a Kalahari Red-Red Boer cross) bloodlines and sold to a top of $4370.

Selling agent, Jack Burgess, GDL Blackall, said five bucks had gone to Roma while another three had been sold to an Aramac buyer and one to a Longreach address.

"We had phone calls from as far as Victoria about them," he said.

"It's an excellent result for Seaford Reds, especially after drought saw them get out of cattle and then sheep.

"Their goats have been reared and raised in a semi-arid environment and are a very athletic type, with plenty of length and depth, in paddock condition."

Related: Coolagh getting the goats

Ms Dennis said they had wanted to make sure they could stand behind their breeding aim, of animals able to work in rangeland conditions, before they started selling offspring.

"Their weight gain was going so well," she said.

"We measure EBVs with Kidplan and weight for age is the main one we look for.

"We just have a passion for goats and breeding goats fit for purpose is our aim."

The price paid on Tuesday comes in the wake of a new world record for Kalahari Red bucks set in South Africa the previous week, at the Karoo Boergoats Group auction sale, when Albie Horn received R160,000 (A$14,150) for a sire.

The managing director of Australia's largest goat processor, Campbell McPhee said the record price showed that interest in the goat industry was as strong as it had ever been.

"For people to spend that sort of money, it means both that they've got a strong fence and that they have a belief in the industry," he said. "It gives us the confidence we need to invest more in what we're doing at Western Meat Exporters."

Mr McPhee said that from what he'd heard, Kalahari Reds were sought after because they walked out to water better than other breeds, apart from rangeland goats, and always seemed to be high in vigour.

"That means they're always looking for a cycling female, a good thing, especially on our larger properties," he said.

Mr McPhee, based at Charleville, said the hunger for goat genetics and herds was helping disperse and build up numbers, which ultimately gave people an opportunity to get into the industry.