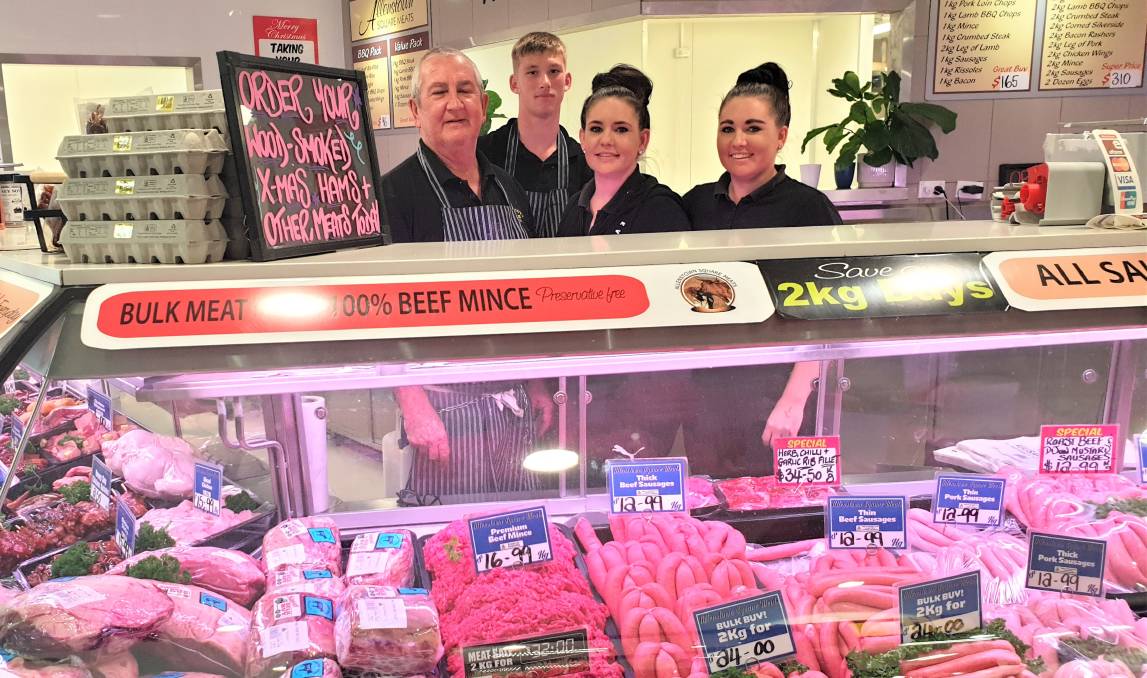 Rockhampton butcher Geoff Elliott, with his daughters Leah and Hayley plus Jye Murphy, says the large majority of his customers' purchases are beef. Picture: Sally Gall

Price and levels of fat are the biggest determinants for consumers making beef shopping choices, a CQUniversity study has found.

Price and levels of fat are the biggest determinants for consumers making beef shopping choices, a CQUniversity study has found.

Professor John Rolfe told the Developing Northern Australia conference held in Australia's beef capital, Rockhampton, this week that greenhouse gas factors associated in some quarters with beef production were insignificant in the minds of shoppers when buying beef.

These were some of the results of a study undertaken into consumer demand, labelling different cuts of beef with a variety of different messages surrounding health, animal welfare, environmental credentials, taste and organic production.

This type of information, termed credence factors can't be measured objectively, Professor Rolfe said, although there is a rapid growth in customer demands for information about these aspects.

As well as identifying the relationship between meat consumption and different credence information strategies, such as branding for organics or animal welfare standards, the study also aimed to find the best way to communicate credence claims to consumers and what benefit there was to the beef industry in doing so.

Specifically, it wanted to assess the potential to align with existing Beef Sustainability frameworks.

Involving 300 respondents with six choices, it resulted in 2000 pieces of information.

Professor Rolfe said there had not been much differentiation for meat cuts once price had been stripped out of the equation.

"We found that taste was important but not hugely so," he said.

"As soon as you add in information about fat, it's a huge negative, so the health message is really getting through.

"There was a small negative with animal welfare claims, the greenhouse gas factor was insignificant, being organic was a small positive, which indicates a niche market, and price is a negative."

Professor Rolfe said he was surprised by the findings, given the media focus on the relationship between beef production and greenhouse gases in recent years, to the extent of the MLA promise that Australian red meat industry would be carbon neutral by 2030.

"Clearly consumers are going to reduce their consumption further but there is much less concern about greenhouse gases than expected," he said. "I think it's important for the industry looking forward though - younger people show more concern about this and they have a greater flexitarian diet."

He also said the results may reflect a "woke" generation, in which there may be a disconnect between what people say is important and what they do.

"It's hard to advise producers what to do," he said.

According to a butcher who has served the Rockhampton public for 34 years, 70 per cent of his turnover is beef.

Geoff Elliott, who started butchering in Blackall 40 years ago before moving to Rockhampton and working for Angliss then branching out on his own, people are looking for leaner meat these days.

"Not like the old days, they'd want to cut your hand off if you went to cut the fat off," he said. "And back 40 years ago, meat had a lot more fat than it does today."

It's no surprise that customers in the beef capital would have a preference for beef but Mr Elliott said that for people in a workingman's town, he aimed to buy good quality graded rib fillet that he wasn't making much profit from, for his customers.

"In our region, we don't have a clientele that are looking to pay $80 a kilo for rib fillet," he said.

There was a lot of demand for grassfed beef, largely for its taste, Mr Elliott thought.

He wasn't sure how great a role lotfeeding animals played in his customers' minds.

"Of 10 items that a customer buys from me, eight or nine of them are beef," he said. "People might have cut back their quantity just a tad though."