After receiving significant rain in February, the Camm Agricultural Group has harvested enough cotton to get an irrigated cotton crop over the line. 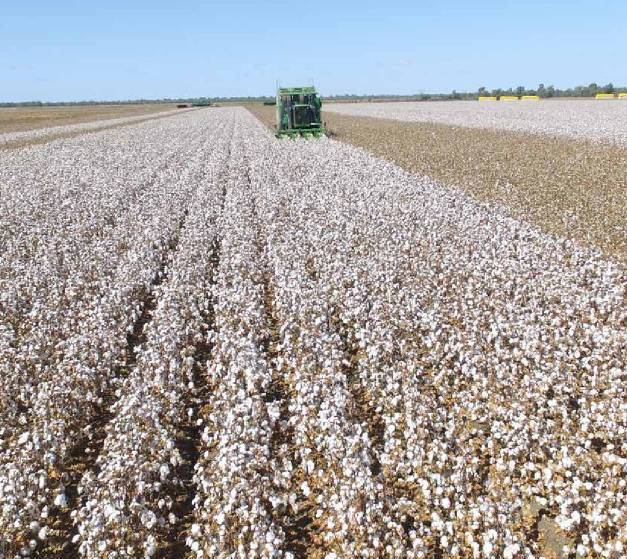 After receiving significant rain in February, the Camm Agricultural Group is now four weeks into planting 720 hectares of irrigated Sicot 748B3F and 746B3F cotton at Morocco Station, near Surat.

Camm Ag's CEO Bryce Camm said they flood harvested 14,000 megalitres of available water from the Balonne River during the February flood, which will give them enough water to get their cotton through the growing season.

"We used some of the available water to provide subsoil moisture before planting," he said.

"Since we watered up and started planting we have received 60 millimetres of rain, including hail damage, so some of that has been replanted.

Mr Camm said they increased this year's planting on the previous year, due to more water availability.

"Last year, due to our reduced water supply we planted 400ha, which we successfully got through the growing season," he said.

"We finished with a yield of 14 bales/hectare over the better crop and 12 bales/ha over the balance, and sold the crop upwards of $500/bale.

"It was a kinder growing season last year, and while we did not receive much in-crop rain, we didn't have any insect pressure to deal with."

Mr Camm said they had already forward sold 1000 bales of this season's crop, locked in at $550/bale.

He said while he had some concerns about how China's trade restrictions may impact the cotton market, he said Australia's reputation for producing high quality lint was positive.

"In fact, all of Australia's products are highly sought after, and we are fortunate to have good multiple markets that are seeking our quality cotton, grains or beef," Mr Camm said.

"It is critical that the Australian government continues to fight hard to open up trade deals that are currently under negotiation."

Camm Agricultural has finished its dryland wheat harvest consisting of 3440ha that returned between three to four tonne/hectare.

"We initially were attracted to the property due to its large licence for a 26,320 head feedlot," Mr Camm said.

While the feedlot license is still in place they haven't developed it as they have been concentrating on their expansion and improvements at their flagship Bowenville feedlot Wonga Plains.

The property comprises of predominantly level to gently undulating country bound by the Balonne River on the eastern boundary. The Balonne River provides beneficial flooding across select areas. The country to the west of the river comprises of brown and black self-mulching cracking clay soils originally timbered with coolibah and brigalow.