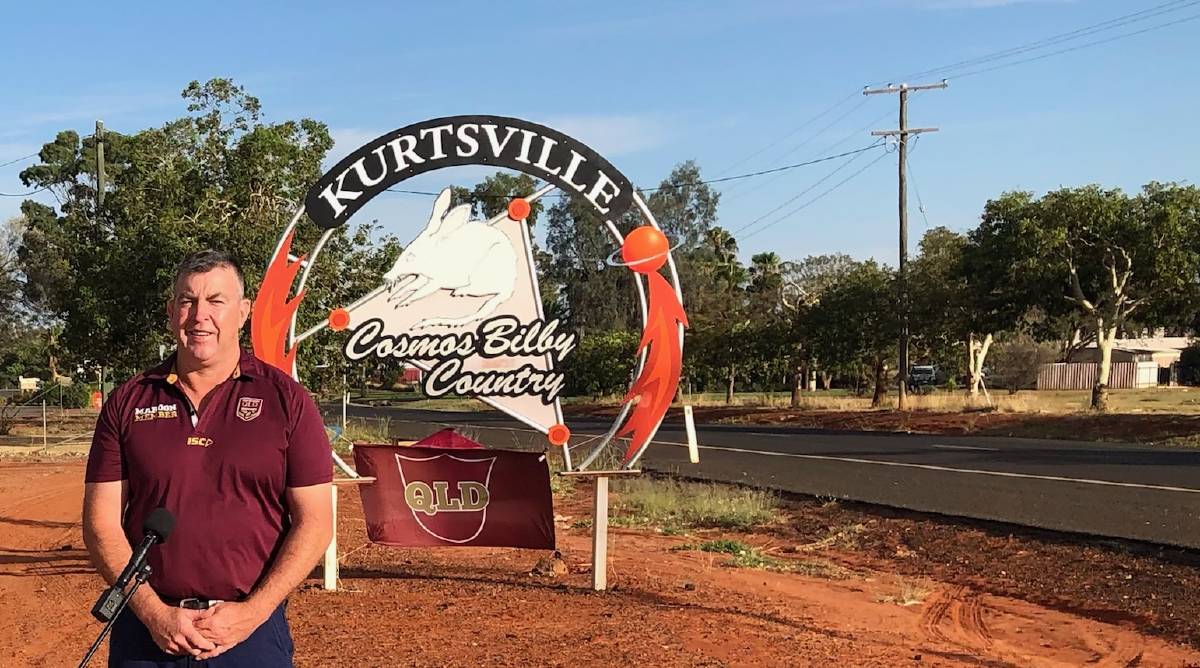 Murweh Shire Mayor Shaun 'Zoro' Radnedge is a proud Maroons supporter and an even prouder supporter of Charleville's homegrown heroes such as Kurt Capewell.

Queensland rugby league legend Darren Lockyer might have a stretch of highway named after him in south east Queensland but now current Maroons star Kurt Capewell has a whole town named after him.

Queensland rugby league legend Darren Lockyer might have a stretch of highway named after him in south east Queensland but now current Maroons star Kurt Capewell has a whole town named after him.

The mayor of the Murweh Shire, which has Charleville as its headquarters, has made good a flippant remark that if the Charleville-born Capewell played three State of Origin games, he'd rename the town.

"I floated it around as a joke so I had to make good," Mayor Shaun 'Zoro' Radnedge said, standing in front of temporary "Kurtsville" signs at the entrance to town.

Capewell, KP to the Charleville locals he grew up with, starred for Queensland in the first State of Origin game this year, coming up with a spectacular try-assist that helped the Maroons to an 18-14 win.

Tonight's game at Suncorp Stadium will be Capewell's first Origin decider and Radnedge said the last thing he'd wanted to do was put pressure on the young star.

"I've spoken to Kurt though and he says he feels very privileged by what we've done, and he's ready to rip in," he said. "The players have been in a bubble for the last four or five weeks - I thought it would be a good way to let them know regional Queensland was right behind them."

The temporary alteration has the thumbs up from fellow Murweh councillors and from the QRL, and Cr Radnedge said the attention it had created was helping remind wider Australia of the ongoing drought conditions in the area that people were coping with.

For those wondering if the name change is here to stay, Cr Radnedge says unfortunately not.

"I'm only the mayor, not the Prime Minister," he laughed.