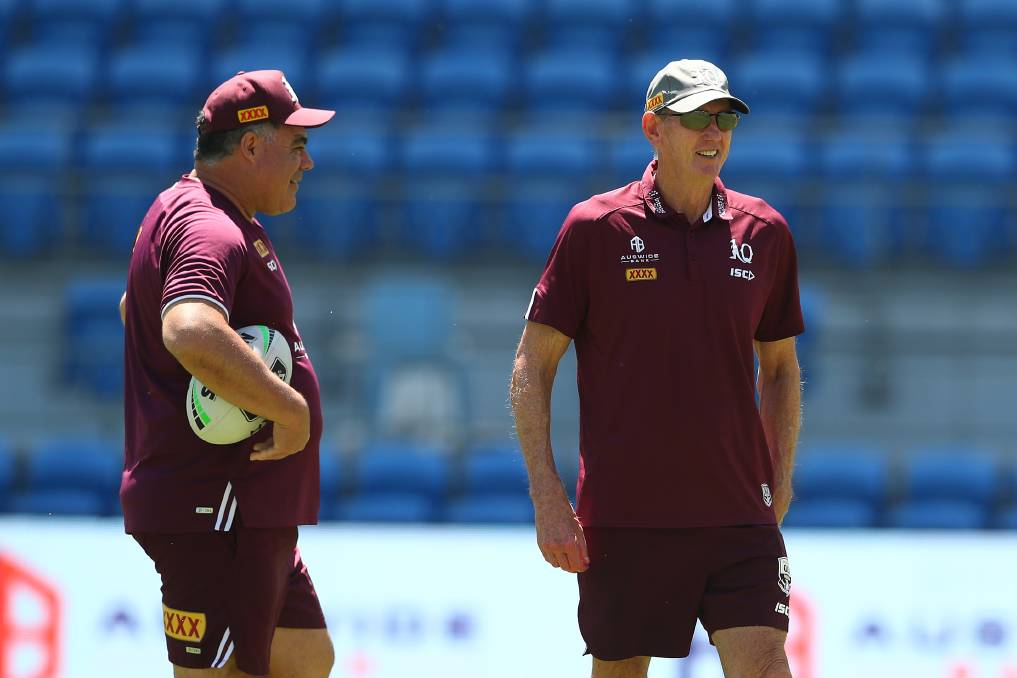 Could master coach Wayne Bennett's controversial decision to rest his star props last week for extended periods lead to one of the greatest Origin upsets tonight?

Could master coach Wayne Bennett's controversial decision to rest his star props last week for extended periods lead to one of the greatest Origin upsets tonight?

Josh Papalii and Dunamis Lui both played well in the opening exchanges against the Blues, where the Maroons had 70 per cent of possession in the first 15 minutes.

Now we all know this Queensland outfit is a million miles from one of the State's best in 40 years of Origin.

There's certainly no 'King' Wally Lewis or Mal Meninga, now the assistant coach, from the early days and then you move to future Immortals Thurston, Cameron Smith and Billy Slater in recent times.

Queensland stole game one when NSW went to sleep and blew a 10-nil lead to record one of the great Origin wins.

But at 18-4 down at half-time in Sydney, Bennett knew there was no chance the Blues would let that slip and even moreso when Jack Wighton scored in the early minutes of the second.

It's been the longest domestic season on record, naturally due to COVID-19, so what was the point of putting Papalli and Lui back on early in the second half?

The game was gone and Bennett had Brisbane on his mind.

Sure, Papalii went back on after 60 minutes, but Bennett had to make sure he wasn't burning out the other forwards who must produce the game of their lives tonight.

Queensland have made some smart changes, with Corey Allan replacing Phillip Sami on the wing, although the former is likely to play fullback with Valentine Holmes, who's yet to recapture that explosiveness before he went to the NFL, shifting to the flank.

NRL Rookie of the Year Harry Grant is a wonderful selection, although it remains to be seen where he will play, given courageous hooker Jake Friend produced 44 tackles, while Christian Welch's return from a head knock in game one provides an enormous lift.

Plenty was made about the biff between Blues' prop Payne Haas and Maroons' lock Tino Fa'asuamaleaui, but you don't need a 'blue' to intimidate. You need a weapon.

Look at Blues' lock Jake Trbojevic, who's probably never thrown a punch on the field, but it doesn't matter when you can hit like he does.

The way he 'snapped' Xavier Coates and Lindsay Collins in half was a throwback to the game's best technical defenders like 'Cement' Gillespie, 'The Axe' Gillmeister and 'Beaver' Menzies.

Now Daniel Tupou is a wonderful player and was a man of the match contender in game two after scoring a try and making a game-high 224m.

But he looked like 'The Chief' Harragon or 'Spud' Carroll the way he launched himself into the line with no fear of being 'snapped'.

Jaydn Su'A is the obvious candidate.

If Queensland wins tonight, it will be one of the great underdog performances and you also sense it will go down to the final minutes when the lungs are burning.

After the season started in mid-March, it might just be Bennett's decision to 'rest' key forwards last week which could prove the difference.