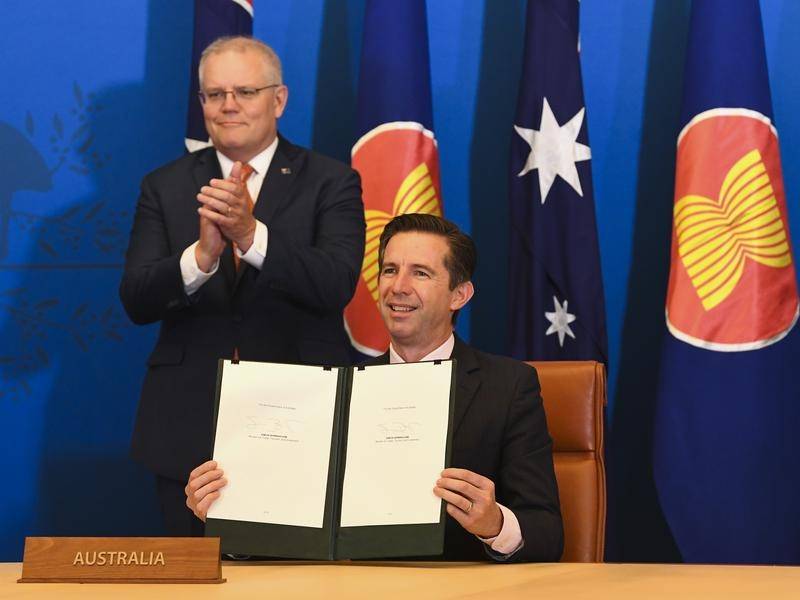 There are hopes a new regional pact will pave the way for Australia and China to resolve diplomatic tensions and trade disputes.

There are hopes a new regional pact will pave the way for Australia and China to resolve diplomatic tensions and trade disputes.

Australia officially signed onto the 15-nation Regional Comprehensive Economic Partnership at the weekend after eight years of negotiations.

The agreement will cover about 30 per cent of global goods and services.

Australia already has bilateral deals with each nation, so the agreement will not lead to a drop in trade tariffs.

But it could kickstart talks between Australian and Chinese officials.

Trade Minister Simon Birmingham is keen to resolve battered relations, having been ignored by his Chinese counterpart for many months.

"We continue to be open to dialogue with China at any time," Senator Birmingham told ABC radio on Monday.

"Our door is open and the ball is very much in their court."

The prime minister said he was always open to such a meeting.

He and Chinese premier Li Keqiang took part in two rounds of multilateral talks at virtual summits over the weekend.

"Australia has not broken off any dialogue," Mr Morrison told 3AW radio.

"We're totally happy to be having those discussions and we stand ready to."

Other valuable exports including beef and wine are also in the firing line.

"We are deeply concerned by some of the regulatory actions and decisions China has made this year," Senator Birmingham said.

"We've made no secret of our concern and our displeasure in that regard."

The prime minister said there were undoubtedly "tensions" around some Australian exports into China.

"We're seeking to work through those patiently and practically," he said.

"They're saying this is not an act of retribution or coercion or anything like that - that is what they're saying - so we will work with that and seek to resolve these issues as practically as we can."

The Australian Council of Trade Unions is unhappy with the Indo-Pacific trade agreement.

ACTU president Michele O'Neil is concerned the deal was negotiated in secret and fears Australian workers could be displaced by cheap overseas labour.

"We support trade but we want it to be fair trade," Ms O'Neil told the ABC.

"We want to make sure that in increasing our exports, we are also making sure we are not putting at risk local jobs."

The trade treaty will be presented to federal parliament and scrutinised by a committee, with the process expected to take a year or two before the deal comes into force.