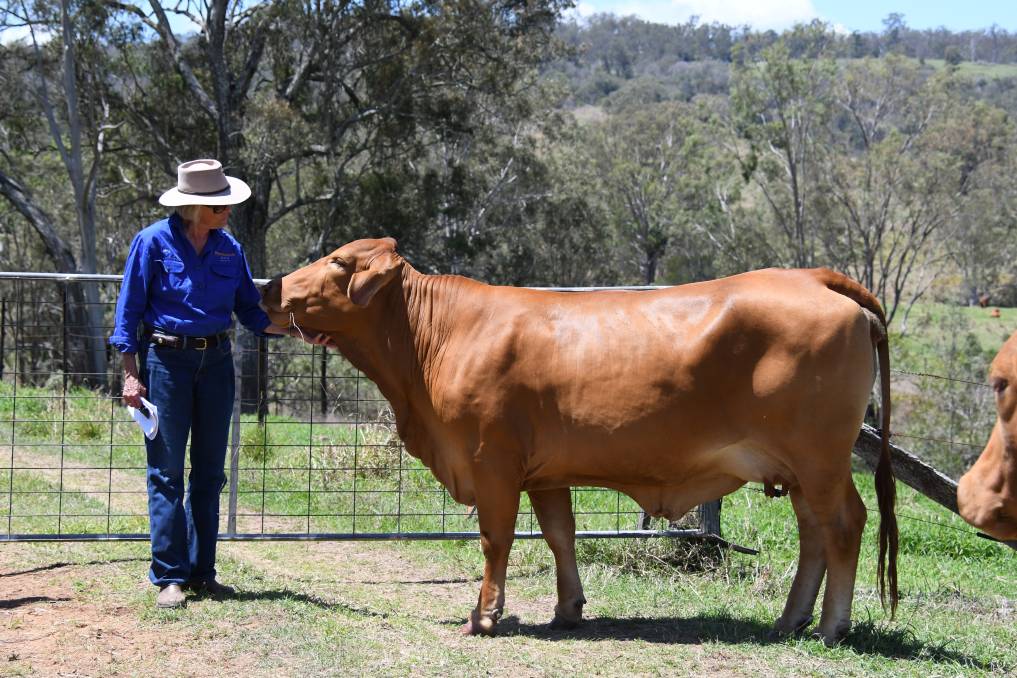 Rich history: Truvalle Droughtmasters'l Margaret Wilson with her favourite cow 4349 Tahsil 49 at The Valley, where the influential stud was established in 1966.

Truvalle Droughtmaster Stud principal Margaret Wilson will bid a fond farewell to the stud selling ring when the majority of the stud herd are presented for sale at the Coolabunia Sales Complex, Kingaroy, on November 28.

Truvalle Droughtmaster Stud principal Margaret Wilson will bid a fond farewell to the stud selling ring when the majority of the family's founding Droughtmaster stud herd are presented for sale at the Coolabunia Sales Complex, Kingaroy, on Saturday, November 28.

In all, a total of 71 registered females, four sires and seven yearling bulls will be offered by Truvalle during the dispersal sale which has been incorporated into the annual Cream of the Crop Droughtmaster Female Sale this year.

Margaret said since Truvalle was registered with the Droughtmaster Society in 1966 (as stud No.22), the family has aimed to breed hardy, rugged cattle, of quiet temperament and good conformation, that thrive in all conditions.

"The bulls and females included in this draft are no exception. They'll perform well in stud or commercial operations across the country," she said.

Through its 54 years of operation, Truvalle, situated at The Valley south of Blackbutt, in South East Queensland, has etched its name in the annals of the Droughtmaster Society's history, as one of the breeds more influential enterprises.

The stud was originally established on The Valley by Joseph Wilson, initially with bulls from the Mungalla Stud, and heifers from the Bellevue Stud. He joined the Droughtmaster society in 1962.

Joseph's son Peter Wilson joined the partnership soon after, and when Joseph passed away in 1978, Peter and Margaret took the reins of the operation.

After Peter passed away in 2002, Margaret and her son Cameron continued to operate the business until Peter's cousin, Alexander Hammond, arrived at The Valley, and Cameron and his wife Trinity moved to The Range, in the Nanango area, which Peter had purchased to run half their herd on.

Over the years the Wilsons have garnered well deserved recognition at stud sales and in the show ring for the article they produce.

Some of these highlights are as follows:

"Truvalle has also proudly supplied the foundation stock for many Droughtmaster studs. We've sold cattle right across Australia, as well as into Taiwan, Malaysia and China."

Looking ahead, Margaret said she will still have a handful of young bulls to sell.

"Maybe later, we'll buy some commercial females, but that is something to explore down the road."