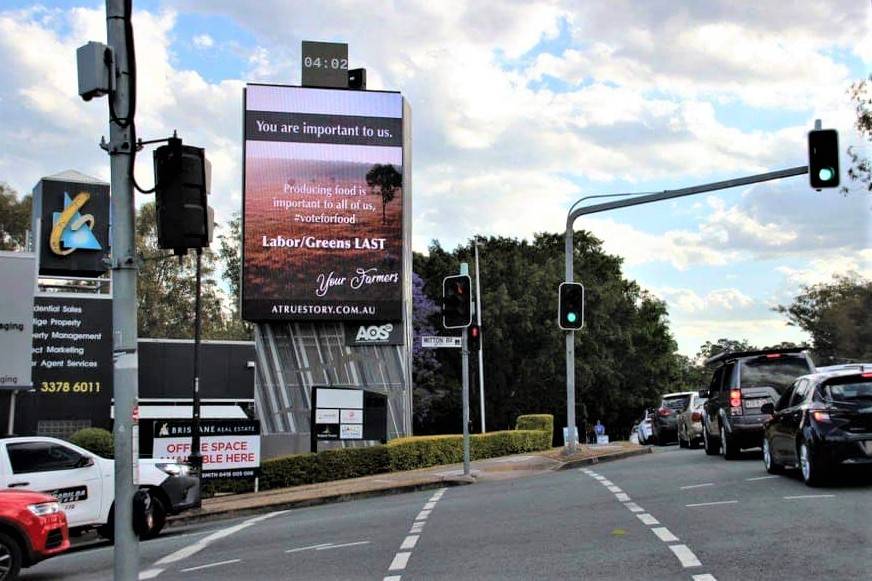 Hundreds of thousands of commuters saw the Chapel Hill billboard in the fortnight it was operational. A similar pitch has been made to voters in Townsville.

Connecting with consumers preparing to cast a vote has been the motivation behind a 'vote for food' billboard and television advertising campaign conducted in the last fortnight by producer advocacy group A True Story.

Connecting with consumers preparing to cast a vote has been the motivation behind a 'vote for food' billboard and television advertising campaign conducted in the last fortnight by producer advocacy group A True Story.

They told hundreds of thousands of Brisbane and Townsville commuters to put Labor and the Greens last on their ballot papers in the interests of the meals they eat.

The message was signed from 'your farmers' and spokeswoman Elisha Parker said it was designed to represent food producers speaking directly to voters and food consumers, without political overtones. The message on the billboards on display in Brisbane and Townsville has been designed to leverage off the interest in food production aroused by the global pandemic.

"Over the last couple of years the ALP government has made some impactful decisions but people in cities don't have a clue about the impact of those on their food prices," she said.

"COVID was one of the first times people had to think about food and realise how close it all was - we wanted to leverage off that."

Related: The 'quiet farmer' speaks up on Ag Day

As well as two billboards in the Brisbane suburb of Chapel Hill and two in Townsville, 30 second ads were aired on television during the spring racing carnival broadcast, the NRL grand final, each episode of The Block, and on Sunrise.

The group has used the clip in a social media campaign as well.

Costing $10,000, the crusade was mostly funded by livestock donations.

The accompanying social media campaign had reached nearly 190,000 people in 19 days, and engaged nearly 24,000 of them.

Ms Parker said leaving the blitz to the last two weeks of the election campaign meant their message was front of mind with voters.

"We're not directing people who to vote for, but Labor and the Greens have proved they don't support agriculture," she said.

"We've made sure it aligns with what industry groups are saying so it's a single message people are getting."

She added that they had targeted Townsville as well as urban Brisbane because three seats around the northern garrison city were marginally held by Labor. 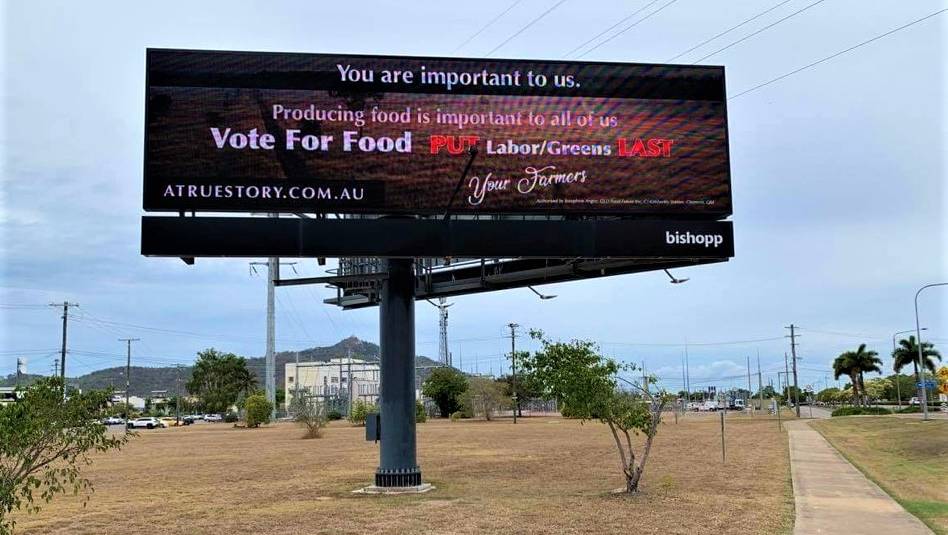 The Woolcock Street billboard in Townsville.

One of their social media posts questions the Premier's call for people to support tourism on the Great Barrier Reef, after vilifying primary producers for supposedly destroying the natural wonder.

For the 2019 federal election it highlighted Labor's changes to vegetation management legislation in the state and comments from federal Labor that it would bring in similar legislation across the nation.