Central Queensland welcomes wide spread thunderstorms, along with the forecast of more thunderstorms for much of eastern and southern parts.

Central Queensland was blessed with an extensive cloud band with embedded thunderstorms this week, with the Bureau of Meteorology predicting more severe thunderstorms and heavy rainfall across eastern and southern parts of Queensland.

Those lucky to have been blessed with rain in central Queensland shared the news by posting to the Who Got The Rain? Facebook page.

Kate Chapman recorded 60 millimetres on Tuesday afternoon at Rowanlea, south-west of Calliope, saying it was their largest single fall in almost two years.

Cawarral local Lucy Thakeray recorded 45mm in under one hour, with their week's total measuring 91.5mm.

Louise Stonehouse recorded 43mm in a fast-moving storm between Childers and Woodgate on Tuesday evening. 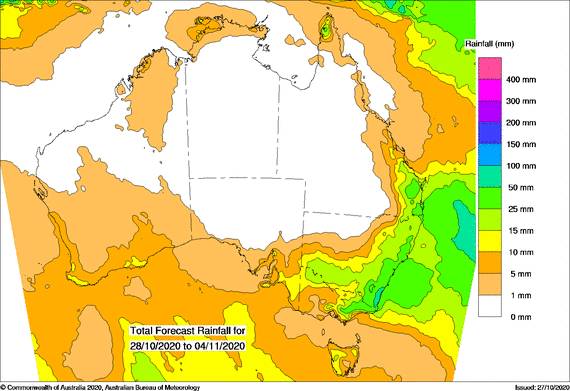 The Bureau has said a high pressure system near New Zealand maintained a weak ridge along the tropical east coast, while a high west of Tasmania extends a ridge over south west Queensland.

Conditions should stabilise about the east from early on Thursday as the trough pushes offshore.

BoM forecaster Peter Clarkson said due to the La Nina season, there is a 70 per cent chance of seeing above average rainfall through to November.

"What you find during a La Nina season is the waters around us are a bit warmer, so they have a bit more moisture," Mr Clarkson said.

"Generally, these kind of events lead to more rainfall than they would without those warmer waters around us, essentially because those clouds can tap into those warmer oceans around us.

"It does happen from time to time and we get those troughs moving through at this time of the year."

BoM predicted that the fortnight of October 26 to November 8 was likely to be wetter than average for much of the eastern part of the state.

Current climate outlooks indicate rainfall during November 2020 to January 2021 is likely to be above average for most of the country.