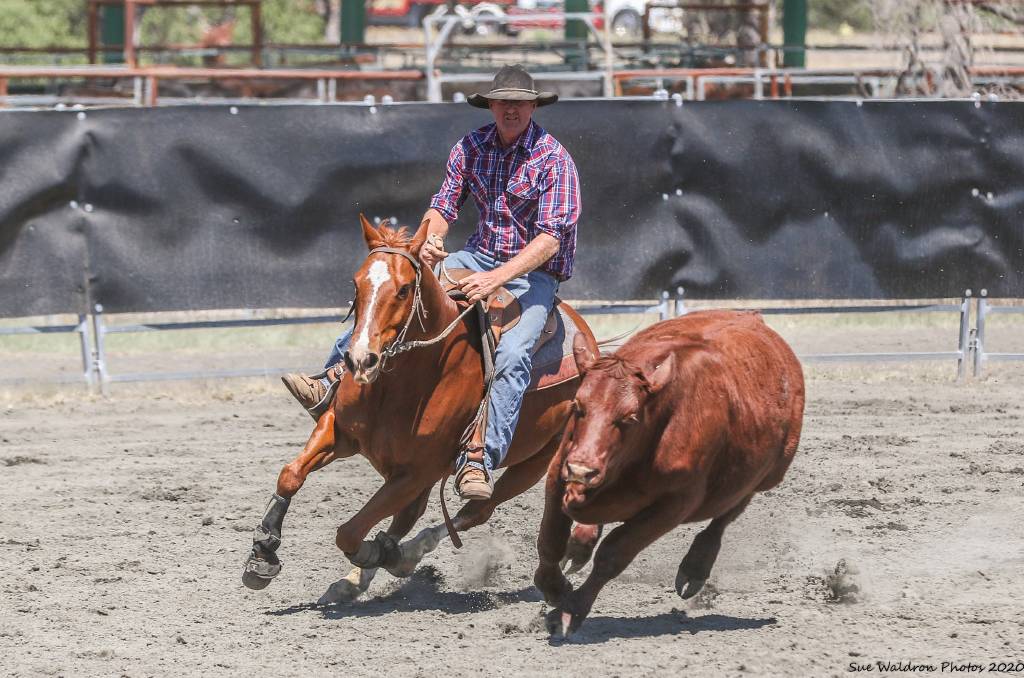 The last time Springsure district campdrafter Peter O'Neill won the Condamine Bell Campdraft was in 2014 and this year in spite of the COVID disruptions, it came true again.

The highly successful four-day Condamine Bell Campdraft last weekend left many competitors believing they were back in campdrafting paradise after being in lockdown for many months.

"It was unreal to win, and to be back campdrafting," Mr O'Neill said.

"To win a draft is a big achievement with so many good horses and riders competing."

Mr O'Neill took the coveted Condamine Bell astride the former champion cutting champion A Boy Named Sue, owned by his boss Mark Ruff and wife Shelly who live in Victoria.

He claimed the Condamine Bell on 270.5 points against fellow competitor Joe Payne on Spin Rey with 268.5, while Rowan Marks and Zane Haberman were equal third on 267.5 points.

Mr O'Neill said the Ruffs campaign Sue in the Victorian summer months, and send the horse north in the winter for him to compete on.

"He walked off the truck at Springsure the day before lockdown in March, so he was still here for the Condamine event," he said.

The Condamine Bell Campdraft committee made the decision back in May that if it was possible to run the event, they would - but were very mindful if they had to cancel.

Condamine Campdraft president Spencer Morgan said they worked well with those they needed to, to make the event happen.

"The Australian Campdrafting Association had already done the work on what we needed to do to help us implement the COVID safe regulations," Mr Morgan said.

"Next, we put our plan to the local Miles police assuring them we had a COVID plan in place, along with our designated COVID officer, Toni Gray.

"The police really could not have been more helpful and agreed to holding the event, saying that everyone needs to have an outing."

Mr Morgan said for safety reasons, they kept the competition open to Queensland competitors only, and received a massive 1800 nominations.

"We have a huge area to spread everyone out as the Condamine Sports Complex is home to the campdrafting arena, a 18-hole golf course, gun club, cricket and tennis club," he said

Mr Morgan said apart from the necessary COVID signage and hand sanitiser, the committee installed extra generators, plus laid an extra 1.5 kilometres of poly pipe to run water further out, so all the campers could spread out.

"We employed a local business to clean and sanitise the toilet and shower amenities at two hour intervals - and everyone felt safe about this," he said.

Mr Morgan said the other restriction they implemented was the bar was only opened during meal hours, and "we had no issues at all".

"It was a case of everyone was just pleased to be attending a campdraft, and they all were aware of the restrictions needed to be put in place," he said.

President of the Australian Campdrafting Association, Hugh Philp said his members are pretty excited about the return of campdrafting.

"From now to the end of the season, the ACA will support those campdrafting committees who wish to run events," Mr Philp said.

"As with the Condamine Bell, our ACA staff have been on hand to help implement the COVID rule restrictions."

He said all competitors were now looking forward to a full season of campdrafting kicking off from April next year.

He said like many others, he let his top horses out for the season and concentrated on educating younger horses, along with catching up on a few jobs like fencing around his property to get him through lockdown.

"At the beginning of the lockdown with so many big events cancelled, our members understood its importance but were disappointed," he said.

"By the time it got to July onwards, we got a few events going and some campdrafting schools, which was good for everyone."