Buyers from three states pushed registered bulls to $65,000, registered heifers to $12,000 and commercial heifers to $1850 on the way to a $1.473 million gross at last week's annual Rockhampton Brangus Sale, CQLX Gracemere.

The youngster sold to Hardy and Amanda Woodard, Taloumbi stud, Eidsvold. After the sale it was announced that a share in the top seller had been bought by the Pearce family, Telpara Hills stud, Atherton.

Brad and Briony Comiskey, Lunar stud, Emerald, secured the $50,000 River Run 27 - a paternal half brother to the top seller.

Paul and Denise Studt, Coolabah stud, Capella, averaged $20,000 for their pair topping at $28,000, with both entries selling to David and Tracey Muscat, Brangaloo stud, Dows Creek.

Joe and Sharon Strazzeri and family, Barronessa stud, Atherton, averaged $15,500 for their three, topping at $20,000.

Ian and Sharon Bush, Maytoe, Alpha, purchased four for on average $13,750, while the Mackenzie family, Coolmaringa, Dingo, took three for a $18,000 medium.

The Hick family, St Elmo, Julia Creek, signed off on a trio for a $11,333 average. Taking three also were the Kenny family, Tralee, Middlemount, at an average $14,667.

Red bulls topped at $16,000 on two occasions. These were offered by the Dwyer family, Burrumbush stud, Goovigen, and Tannyfoil stud, Blackwater, selling to buyers from Marlborough and Banana.

The line-up of quality registered Brangus females was met by solid demand, with 25 of the 26 heifers on offer selling for a 96 per cent clearance rate. 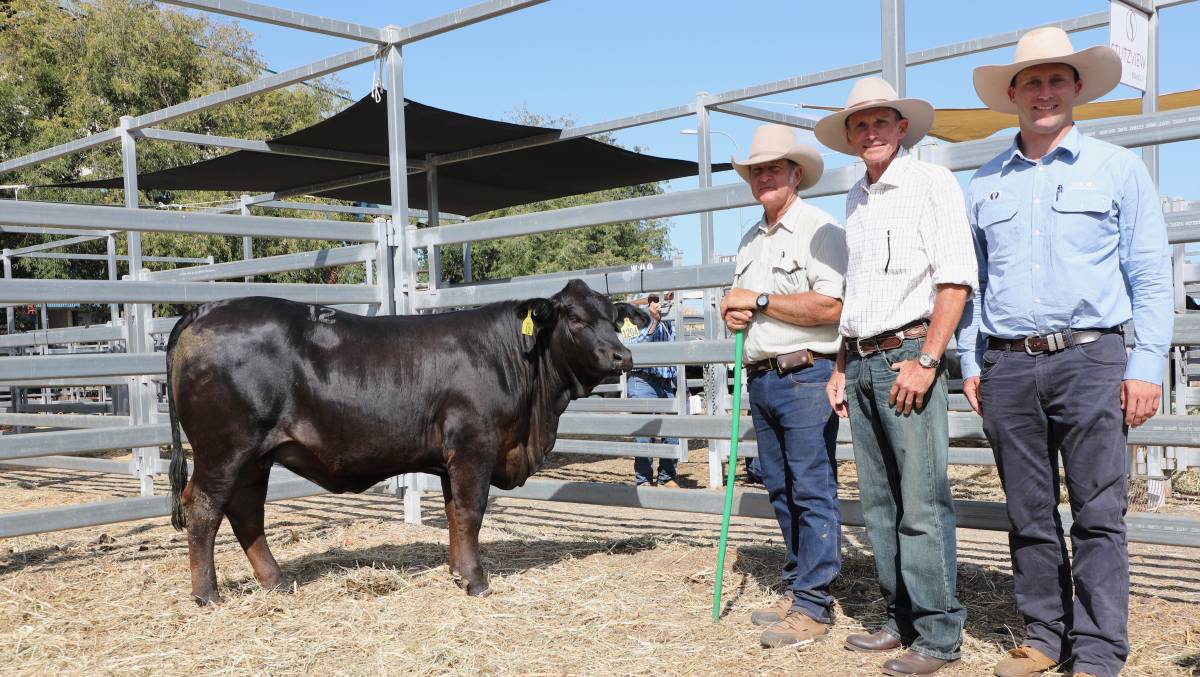 Next best at $9000 was another of the Bonox entries in Bonox B1190, a 24-month-old granddaughter of Coolabah Arthur, selling to David and Tracey Muscat, Brangaloo stud, Dows Creek. Bonox averaged $9333 for their three.

Yaraandoo stud will also be the home for the $8500 Jardine Abigail (Maccaboyz No Fear) offered by Dave and Kay Franks, Jardine stud, Jardine.

As a vendor, John Collins sold 10 to average $3550. These topped at $6000 for a granddaughter of Bonox Mick aged 11-months, selling to the Fernie family, Boombah stud, Dingo.

Gary Taylor, Ginoondah stud, Gayndah, sold three to a top of $2500, while Mark and Amanda Salisbury, Bimbadeen stud, Monto, secured a $5500 entry from the Jardine stud. Rob Campbell, Goondicum, Monto, with his line of 35 EU heifers that sold to a top of $1325 per head at the 2020 Commercial Brangus Female Sale.

Commercial heifers were also in demand with the quality line-up of 126 head selling for a complete clearance.

Market toppers in the older section were a pen of six No.8 heifers from the Kime family, Amaroo, Nebo, selling for $1750/hd (368c/kg) to Phil and Deborah Reid, Black Springs, Capella.

Sectional toppers for the No.9 heifers were a pen of nine sold on account of Greg and Sue Barlow, Amaroo, Comet, making $1850 (458c/kg) and selling to Troy Dunn and family, Bloomsbury.

Topping the youngest section of the day were a pen of seven No.0 heifers offered by Bruce and Leanne Woodard, Bonox, Taroom. These fetched $1450/hd and came back at 471c/kg, selling to Geoff Parker, Manilla, NSW.

Top sellers in the dollar value per kilogram were also offered by the Woodard family. The pen of 10 No.0 heifers sold for 476c/kg selling to the Ahern family, Baralaba.